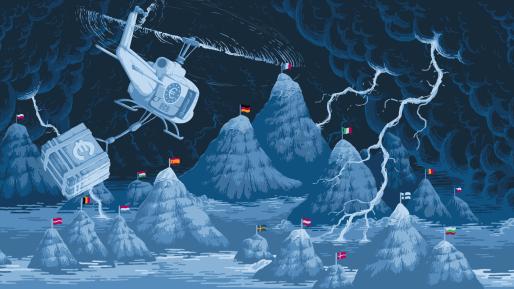 With dangerously few monetary and fiscal stimulus options available to avert a possible recession in the euro area, policymakers and economists have started discussing a proposal that sounds both exotic and straightforward: If consumer and business investment demand are too low, why not have the central bank issue and send, say, €500 to every man, woman, and child in the euro area? They will spend it, and the economy will recover.

The idea, known as “helicopter money,” has a good pedigree and a memorable terminology. Milton Friedman introduced the concept and coined the expression, although he did not advocate carrying it out. Peter Praet (2016), until recently a member of the European Central Bank (ECB) Governing Council, once indicated that “all central banks can do it.” And a recent Blackrock report (Bartsch et al. 2019), with Stanley Fischer and Philip Hildebrand among the authors, has endorsed a version of it.

Furthermore, the concept has clear political appeal. It has been described as quantitative easing (QE) for the people (Muellbauer 2014): Instead of helping banks or making bondholders richer, the central bank gives money to the people, a transparent way of increasing their purchasing power.

What Is Helicopter Money?

In fact, despite its name, helicopter money is not so exotic. From an economic point of view, it is equivalent to the combination of expansionary fiscal and expansionary monetary policies. One can think of it as a fiscal expansion, in the form of higher transfers by the government to the people, financed by government bonds, which the central bank purchases in exchange for money through an open market operation. For this reason, Ben Bernanke (2016) has called it a Money-Financed Fiscal Program, a more accurate but less appealing name—and an appalling one to those who see any monetary financing as a direct road to hyperinflation.

How Helicopter Money Would Work

Suppose, however, that the ECB were willing to do helicopter money. Would it be an effective way to counter a euro area recession from a macroeconomic viewpoint?

On impact, central bank–financed fiscal transfers could well prove effective, because they would prop up consumer spending directly. And unlike the government, which can raise taxes after handing over cash, the central bank would have no means to take the money-financed transfers back. Hence, households might be more willing to spend them (the central bank could decide ex post to offset their impact on its balance sheet by reducing the size of its government bond portfolio, but this would not affect households directly).

These are more questions about longer-term consequences. Assume, counterfactually for the euro area today, that the policy interest rate was positive to start. Then, if output or inflation were too low, the mix of fiscal and monetary expansion would clearly go in the right direction, namely increase activity (Galí 2019). It might not be the right mix, however: The appropriate mix may imply more monetary action or more fiscal action. Indeed, rough numbers suggest that it would not be the right mix. In the euro area, the ratio of non-interest-paying money to GDP is roughly 10 percent. This ratio implies that a money-financed increase in the fiscal deficit of one percentage point for one year would lead to a 10 percent increase in money, thus eventually to a 10 percent increase in the price level.[1] Even assuming that the ECB had adopted a price-level targeting strategy, the inflation cost of such a relatively modest stimulus package would likely exceed what could be acceptable given the current price-level shortfall. Put another way, given limits on how high the price level should eventually be allowed to increase, the associated fiscal stimulus would be too small to be of macroeconomic significance.[2]

If, more realistically, the policy rate is already down to zero (or a small negative number given the effective lower bound), as is the case in the euro area, then there is no immediate difference between money and debt. Both pay zero (or close to). So, in this case, is helicopter money simply equivalent to a fiscal expansion financed by debt? Not quite. It depends on what investors assume will happen when interest rates become positive again. As observed by Narayana Kocherlakota (2016), former president of the Federal Reserve Bank of Minneapolis, if investors expect that money will pay interest (as is the case for bank reserves in the United States), then there is truly no difference between money and bond finance: Both pay zero now, and both will pay interest in the future. If investors expect instead that money will not pay interest in the future, they should expect the price level to end up higher and thus should expect more inflation in the future. Put another way, if the central bank credibly commits not to pay interest on money in the future, then helicopter money should lead to higher inflation expectations, thus lowering long real rates today. One may well doubt the empirical strength of this expectation channel. But to the extent that it is present, the same outcome can be accomplished through forward guidance, i.e., by the central bank’s commitment to keep the policy rate unchanged until the price level (and not only inflation) has reached a certain target.

This analysis suggests that the general case for helicopter money is weak. In the United States, there is room to use both monetary and fiscal policies and to do it with the proper mix. In the euro area, where there is little room to use monetary policy, the action should concentrate on fiscal policy. Whether it is financed by bonds or by money makes little economic difference, unless one accepts high inflation down the road.

Here is the euro area twist, however. Fiscal policy in the European currency union is heavily constrained by both EU and national rules. In particular, as one of us argued in a previous post, if the rules are respected, the room for fiscal expansion is extremely limited and likely to be insufficient to fight a recession. In this context, helicopter money—direct transfers from the ECB to people—can be interpreted as a way of getting around the fiscal constraints. Debt appears on the balance sheet of the ECB and not on the balance sheets of national governments. And, as ECB debt is joint debt, it allows even member countries with weaker fiscal positions to implicitly participate and share equally in the transfers. In a way, helicopter money can be seen as a replacement for the still missing common fiscal capacity. Its implementation, however, would raise operational, legal, and political challenges.

The European Central Bank Would Face Huge Risks and Hurdles

For both governance and practical reasons, the ECB cannot proceed without the approval of the national governments. The ECB lacks the technical capacity and information it needs to do the transfers. It would have to rely on the national Treasuries to serve as a relay or provide the relevant information (such as individual identifications for recipients). If all euro area member governments saw the existing fiscal rules as counterproductive, they might indeed give the ECB their blessing. But some members are likely to see helicopter money for what it is, a way of getting around rules they like. They will try to block it, either through constitutional means, the way the German Constitutional Court tried to block the ECB’s government bond purchase program (the Public Sector Purchase Programme, or PSPP) in 2017,[3] or by simply refusing to participate in the organization of transfers.

Decisions would also have to be made as to the size and distribution of transfers, across countries and across people. Should it be given to people or to households? Should people in Germany and, say, Latvia—a country whose GDP per capita is less than half that of Germany—receive the same amount? If not, who should decide? If the ECB, then it would have to make major distributional choices, a task that is best left to fiscal authorities and should be subject to parliamentary approval.

These distributional implications would add to the legal obstacles. The EU system has been built on the premise of a watertight separation of monetary and fiscal policies. Even if the ECB undertakes on its own initiative and implements through the banking system, a program of de facto cash transfers to households would almost certainly be challenged in courts. The German Constitutional Court, and likely several others, would probably define helicopter money as an economic (rather than monetary) policy program and argue that such a program is the responsibility of national governments and parliaments. [4]

Finally, helicopter money would involve risks for the ECB as an institution. Issues of mandate and independence have already arisen about the distributional implications of unconventional and even standard monetary policy (and specifically its cost to “the German savers”). They have also been raised about the increasing use of macro prudential policies, some of them with strong distributional implications. Helicopter money would heighten these controversies and lead to serious questions about the appropriateness of central bank independence. The risk seems to us to be too large to be taken lightly.

This post is the third in a PIIE series on how to confront the next European recession. View others:

1. This is an order of magnitude. At the end of 2014, before QE started, banknotes in circulation in the euro area amounted to 10 percent of GDP and bank reserves to 3.1 percent of GDP.

3. In a 2017 ruling, the German Constitutional Court assessed as “doubtful” whether the ECB’s Public Sector Purchase Programme put in place to implement QE is “compatible with the prohibition of monetary financing.”

4. The same ruling by the German Constitutional Court already objected to the PSPP on the ground that it was encroaching on the prerogative of the government and parliament.

More from this series

The Euro Area's Fiscal Ability to Handle Another Recession Is Limited

How to Ward Off the Next Recession