Estate Tax a Key Tool for Fighting US Inequality

This year marks the 100th anniversary of the US estate tax, which affects only the ultra-wealthy. Given the rising focus on American income inequality, the tax should be on solid ground. Not so.

In a period when inequality has been called the number one economic concern of our time, the battle over the estate tax is emblematic of the broader fight over what kind of country we want. Its history shows what our forefathers thought was just, and its recent demise shows how wealth has succeeded in changing policy in its favor.

The tax has been greatly eroded over the last 40 years, after rising in the early half of the 20th century. From 1916 to 1941 the top estate tax rates rose from 10 to 77 percent, where they remained until 1976. Estate tax rates have fallen since, and precipitously so since the turn of the 21st century as inequality has risen further.

Estate tax rates have fallen, and precipitously so since the turn of the 21st century as inequality has risen further.

Consider a couple comfortably in the top 1 percent of US households in terms of wealth, with a $10 million estate. When gifting the estate to their descendants, no estate taxes would be due this year, because the value of the estate is below the exemption level. In contrast, the couple would have paid $4.8 million if it was taxed at 2001 rates. But it's not just the exemption level that has changed; tax rate reductions since 2001 also affect the super-superrich. A $10 billion fortune would pay $1.5 billion more in taxes today if it were taxed at 2001 rates. In the high growth era of the 1950s and 1960s, the tax rate would have been much higher.

It is not hard to understand how a tax that affects such a tiny group of extraordinarily wealthy people—less than 0.2 percent of estates pay any tax at all—has shrunk in the face of the rising concentration of wealth in the United States. Like other groups that have organized successful lobbying campaigns, the affected are easily identifiable, tend to know each other and have political connections, and the stakes for them are high, so organization comes easily with great potential returns for each member.

Their continued pressure on the repeal of estate taxes since the 1970s has brought considerable change, the most dramatic being a complete repeal of the tax in 2010. The tax was reinstated in 2011 but with much higher exemptions and lower rates than before 2010.

There are good reasons to support this tax:

As I have pointed out previously, there is no productive activity in inheriting a large sum of money, so it does little to distort the economy.

Historically such taxes have worked well in the United States. In contrast, in Europe where inheritance and estate taxes are on average much lower, inherited wealth is more common, accounting for over 50 percent of European billionaire wealth, as compared with one-third of US billionaire wealth (figure 1). Fortunes pass from generation to generation, and the typical fortune is 20 years older in Europe than in the United States. 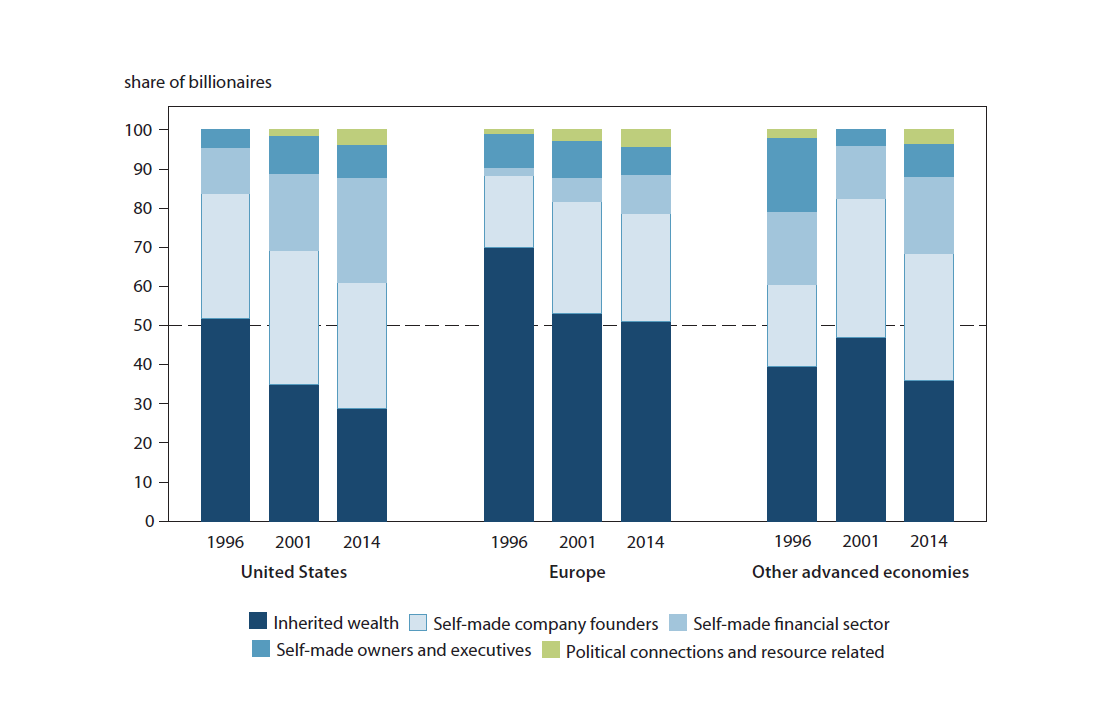 The future of the estate tax will depend heavily on the upcoming presidential election. Donald Trump would like to see it gone. This is not unthinkable, since in a largely symbolic vote last year the House of Representatives voted to abolish it. It is easy to understand why Trump, with a net worth estimated at $4.5 billion, would want to repeal the estate tax. The Waltons, Gallos, Mars, and Kochs also reportedly support estate tax repeal. In contrast, Warren Buffett, Bill Gates, and George Soros have come out in support of the estate tax, suggesting that the makers of new fortunes are less interested in entrenching that wealth than the recipients of old fortunes.

Hillary Clinton proposes higher estate tax brackets as wealth increases, reaching 65 percent for a billionaire couple. My guess is that if people really understood the incidence of the tax, 99.8 percent of the population would support her proposal.