Effects of the Euro Crisis on Reserve Currency Holdings

The International Monetary Fund (IMF) released the latest update of its data on the Currency Composition of Official Foreign Exchange Reserves (COFER) at the end of March, with data through the end of 2012. From the end of 2010 through the end of 2012, the quantity share (adjusted for the effects of changes in exchange rates on the stock of reserves)1 of the US dollar has decreased slightly for all countries from about 64 percent to 63 percent of all reported foreign exchange reserves (figure 1). This phenomenon includes advanced countries (AC) plus emerging market and developing countries (EMDC). The dollar's quantity share of reserves decreased about 3 percentage points over this period and the dollar's quantity share in the reserves of EMDC increased about 2 percentage points. While this two-year snapshot shows a slight decline in official holdings of US dollar assets, the dollar's share has been steadily decreasing since 1999, the earliest period for which we have data. 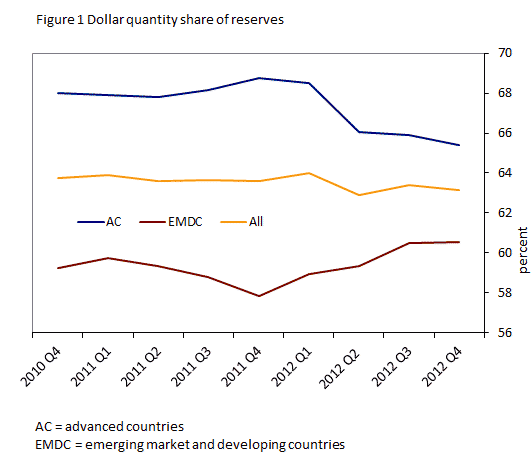 The trend over the same 2010–12 period in official holdings of the euro is more notable and indicative of changing reserve asset preferences. Both EMDC and all countries' quantity shares of euro-denominated assets decreased (figure 2). The share of the euro in AC reserves increased slightly, with a spike in quarter 2 of 2012. 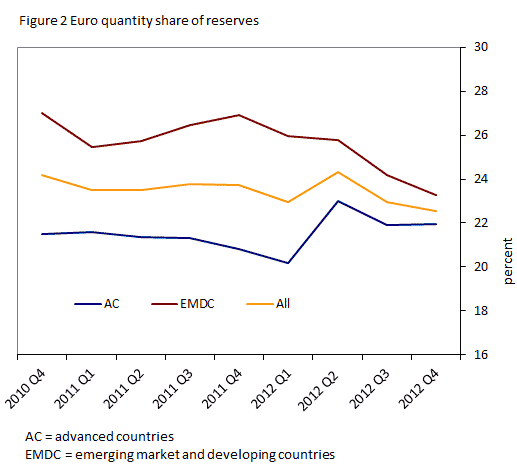 As I analyzed in an earlier RealTime posting, the Swiss National Bank (SNB) has a preference for holding euro-denominated assets. The SNB's holdings and asset purchases significantly affect trends in reserve composition, boosting the share of euro holdings. The SNB continues to demonstrate a preference for holding euro-denominated assets (figure 3). At the end of 2010 as well as the end of 2012, they comprised more than 50 percent of total SNB holdings of foreign exchange reserves, compared with less than 25 percent for all countries. Figure 4 depicts the quantity changes in the SNB's holding of euro assets; the SNB increased its euro holdings by 75 percent in the second quarter of 2012. This jump accounts for the upward blip in advanced countries' euro holdings in that quarter. In addition, the overall increase in SNB reserves, which have more than doubled in two years, faster than the increase in total reserves, has also boosted the euro's share of AC and all reserve holdings. 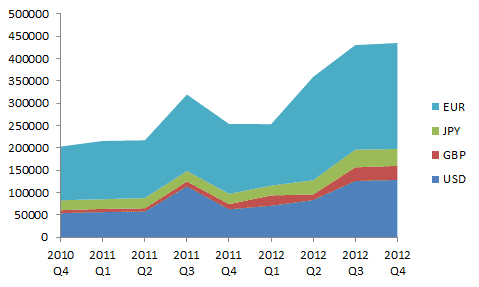 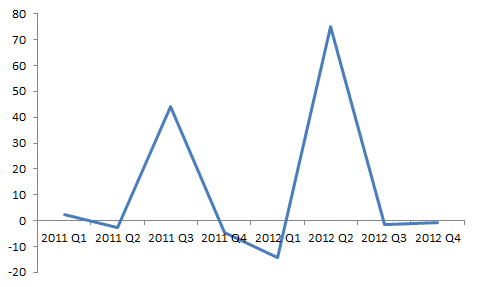 Without the increase in the SNB's euro holdings over the two-year period, we would see a much more prominent decline in quantity shares of the euro, for both all countries and the AC group. The SNB's purchases of euro under its policy of putting a ceiling on the Swiss franc-euro exchange rate (as funds have poured out of the euro area and into Switzerland) is a direct consequence of the euro financial crisis. Moreover, the crisis has not only increased the risk of holding euro-denominated assets in general, but also decreased the supply of "safe" euro assets. Central banks generally do not want to hold Italian and Spanish sovereign paper. The effects of the euro crisis will linger, euro area growth will be weak, interest rates will remain low, and the general attractiveness of euro assets will likely remain low as well.

Meanwhile, the euro crisis appears to have accelerated the long-term decline in the dollar and euro's shares of foreign exchange reserves, pointing to another important trend: the gradual emergence of a reserve currency system. Edwin Truman and I have written before about this trend, and recent data confirm the phenomenon previously identified. The COFER data include disaggregated data on reserves held in assets denominated in only five traditional reserve currencies (US dollar, pound sterling, Japanese yen, Swiss franc, and euro); all other reserve holdings fall into the category of "other currencies." Over the 2010 to 2012 period, holdings of other currencies have increased dramatically for both the AC and EMDC groups (table 1).

The IMF announced at the end of 2012 that it will begin to include Canadian and Australian dollars separately in the COFER data in the first half of 2013. This is a further indication of the emergence of a multicurrency reserve system.

The shares in foreign exchange reserves of the euro and the US dollar may recover somewhat as the euro area and US financial assets become financially more attractive and less risky. Nevertheless, it is likely that we will continue to see a reduced relative preference for holding dollars and euros as reserve managers increasingly diversify their holdings beyond the five traditional reserve currencies, following the lead of private sector investors.

1. For an explanation of the methodology we use to derive quantity shares of reserve currency changes, see: Truman, Edwin M. and Anna Wong. 2006. The Case for an International Reserve Diversification Standard. PIIE Working Paper 06-2. Washington: Peterson Institute for International Economics.

The Scars of the Euro Crisis