The Peterson Institute for International Economics has for some years undertaken research on inequality and inclusive capitalism, partially supported by a series of grants from the ERANDA Foundation. Part of this research has been an examination of the US wage structure in comparison with other countries. Last month, Aetna informed the Institute of its plan to raise the wages of its lower-paid workers. Tomas Hellebrandt has carried out research on the economic implications of the relevant share of large US corporations raising wages for lower-skilled workers (without reference to the effects on Aetna or any specific company or sector). The following note summarizes some of that research.

If all large private sector corporations in the United States outside of sectors that intensively use low-skilled labor increased wages of their low-paid workers to $16 per hour, the pay of 6.2 percent of the 110 million private-sector workers in the United States would increase, on average by 38.6 percent. The direct cost to employers would be $51 billion, around 0.3 percent of GDP (table 1). Alternatively, if wages were raised to $12 per hour, the initiative would benefit 2.8 percent of workers, increasing their wages on average by 23.9 percent. The direct cost to the employers would be $12 billion or around 0.07 percent of GDP.

Both scenarios would particularly benefit women, blacks, and the young—groups that are disproportionately low-wage workers. Women and some racial minorities earn relatively less because of discrimination in the labor market or barriers to education. Young people also receive lower wages on average because they do not yet have the experience to earn higher pay. Table 1 and figure 1 illustrate that the $16 wage floor would boost the average wage of blacks, Hispanics, the young, and women the most. There is less variation across the groups in the percent increase in average wages for a $12 wage floor. 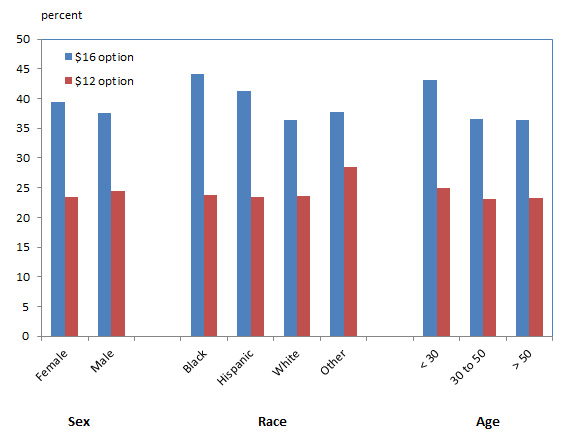 Source: Based on 2013 Current Population Survey.

This analysis uses data on hourly earnings—including overtime, tips, and commission—to estimate how many workers receive less than a specified wage floor—$16 and $12 an hour in this study. The data have been obtained from the 2013 Current Population Survey (CPS), the basis of the official labor market statistics for the United States. It collects information from around 60,000 households each month and is designed to be representative of the US civilian population. The effect on the aggregate annual private sector wage bill (i.e., the direct cost to employers) can be calculated from converting the hourly pay increase for each affected worker into an annual pay increase using the usual hours worked per week reported in the CPS. These annual values are then aggregated across all affected individuals.

1. CPS data do not allow the matching of individuals to particular firms. It only contains information on the industry and size of the respondent's employer. The analysis therefore excludes all workers in low-skill-intensive industries, even if their particular employer does not employ many low-wage workers.