Eastern Europe’s economies are not catching up with their Western neighbors as quickly as many had hoped. The latest Eurostat figures on economic growth in Europe, released earlier this month, show a troubling trend. While growth is returning to Europe after several difficult years, Eastern Europe is not converging with “old Europe,” the pre-2004 EU members.

In 2016, only three East European economies—Bulgaria, Romania, and Slovakia—are on pace to exceed 3 percent annual GDP growth. Estonia, Croatia, Latvia, Lithuania, Hungary, and Slovenia are all growing more slowly than the euro area average. Even Poland, the perennial star performer, is barely above the EU growth average of 1.8 percent of GDP in 2016. This lack of economic vigor is surprising, as Eastern Europe has enjoyed significant energy price declines, a devalued euro (for the six countries already in the euro area or with a currency board pegged to the euro), and falling interest rates.

The main reason for this lethargy is the decline in Eastern Europe’s labor force. The working-age population shrank by around 10 million people in the period 1990–2015, with the prospect of a similar decline in the next 25 years. The decline is due to low birth rates and increased emigration. 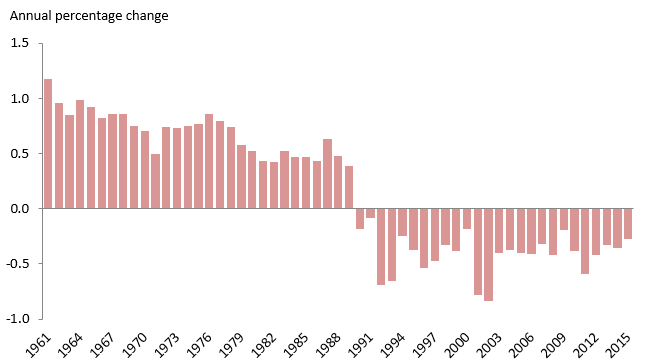 To make matters worse, labor mobility increased greatly after the 2004 and 2007 expansions of the European Union toward the east. In 2004, about two million citizens from Eastern Europe resided in the European Union. During the migration peak in 2007, 1 percent of the citizens of East European countries moved to Western and Southern Europe. By 2009, the total number of nationals from Eastern European countries residing in the EU-15 states increased to 4.8 million. The lifting of labor restrictions in 2014 for Bulgarians and Romanians in nine European Union countries, including Germany, France, and the United Kingdom, prompted another emigration wave. Overall east-to-west migration also picked up after 2014 as economic growth returned to Western Europe. By March 2016, 6.3 million East Europeans resided in other EU states.

The data show that labor mobility is highly dependent on economic conditions: During the euro area crisis in 2009–12 the number of Polish job seekers in Western Europe fell by 44 percent—in part thanks to the relative strength of the Polish economy—while the number of job seekers from Hungary and Latvia increased by 58 percent and 39 percent, respectively. Both countries experienced sharp declines in economic growth during this period. These statistics are grounds for some optimism, as they show labor mobility in Europe follows economic logic. GDP per capita in the Czech Republic, Slovakia, and Slovenia is already 80 percent of the EU average. These countries have experienced net migration inflows in the past decade, mostly from Ukraine and parts of former Yugoslavia. But in Bulgaria and Romania, income per capita is still roughly half of the EU average and emigration is expected to continue.

One solution to the declining labor force is to increase labor participation by women. In 2014, just 47 percent of all East European employees were women. To increase this share, companies can invest in child care, legislate flexible work hours, and create incentives for returning to the labor force after children have left home. One promising venue is to allow more flexible hours, for example through part-time employment. The share of European employees working part-time is highest in the Netherlands (52 percent of employees), followed by Germany and Austria (28 percent), and Denmark, the United Kingdom, and Sweden (26 percent). Yet this practice is virtually nonexistent in Eastern Europe: The lowest shares in the European Union are recorded in Romania (0.7 percent), Bulgaria (2 percent), Croatia (3 percent), and Slovakia and Latvia (6 percent).

Another solution is the introduction of vocational training to provide job skills from an early age. Germany’s apprenticeship program is widely credited for the country’s high youth employment rate. Vocational training, similar to that in Germany, is also present in Austria and the Netherlands, and has been resurrected after several decades of communism in the Baltic countries. Vocational training allows workers to generate income from an earlier age and to train for professions that are sought after in the nearby industrial community. It thus significantly reduces job search costs.

One thing is clear: Without more workers, the convergence period in Europe will take a lot longer. The time to act is now.