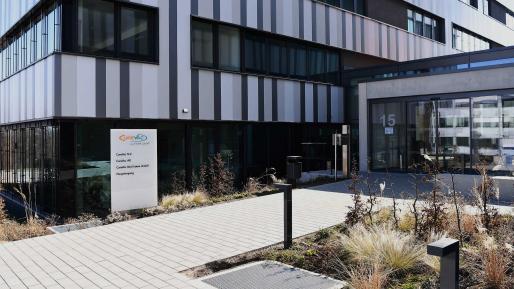 In mid-June, CureVac, the heavily subsidized German biotech firm, recorded surprisingly poor results in final-stage clinical trials of its COVID-19 vaccine candidate. The news that the vaccine had an efficacy of just 47 percent was devastating. CureVac had promised 300 million doses by year’s end and another 1 billion in 2022. Months of work to create a complete vaccine manufacturing supply chain might be lost.

Inoculating the world against disease, infection, and transmission of the coronavirus may require almost 14 billion doses, a number that public health experts warn could rise if variants require booster shots. Estimates are that only a little over 4 billion COVID-19 vaccine doses have been administered so far globally. Even for the authorized COVID-19 vaccines, projections remain highly uncertain regarding how much and how quickly new production can come online. For every piece of good news from Pfizer or Moderna that their capacity is slowly scaling up, there is bad news from an AstraZeneca contractor or Johnson & Johnson cutting projections by 400-500 million doses. As the pandemic continues to rage, the world can hardly afford one more vaccine manufacturing setback on CureVac’s scale.

Despite the crushing news, much of CureVac’s efforts could still be salvaged—but only with some new forms of industry collaboration. The vaccine recipe is just one part of a long and complicated process that ends in getting shots into people’s arms. CureVac’s vaccine may have failed, but the company lined up the same sort of complicated ingredients and kitchens needed to cook up the five-star messenger RNA (mRNA) vaccines of Pfizer/BioNTech and Moderna that have been effective at protecting against the worst effects of the disease.

Why not borrow someone else’s proven recipe and repurpose CureVac’s supply chain to make 1 billion doses of one of the other mRNA vaccines? The supply chain the company built is worth deploying even if the initial COVID-19 vaccine it developed is not.

Policymakers have every incentive to help salvage those 1 billion doses. While Germany, the United States, and other rich countries made a commitment in June at the Group of Seven (G7) summit to donate 1 billion doses to poorer countries suffering from too few vaccines, the G7 needs to do more to encourage companies to expand production more quickly. The new head of the World Trade Organization, Dr. Ngozi Okonjo-Iweala, has also prioritized creative policy solutions—what she calls a “third way”—to get more vaccines manufactured and equitably distributed around the world.

Without help, CureVac’s new supply chain may simply sit idle or, even worse, dissolve. Policymakers should work with the companies to repurpose CureVac’s pan-European vaccine manufacturing network to ensure that it delivers those billion doses, even if they are of a different vaccine. Inaction and continued delays only increase chances that new viral variants will emerge, threatening even the limited progress achieved by vaccination rollouts to date.

All dressed up with nowhere to go: CureVac created a supply chain it cannot use

CureVac is a German biotech company, similar to Moderna and Novavax in the United States and BioNTech in Germany. By mid-May 2020, CureVac scientists had identified a promising mRNA vaccine candidate; by June, it had received regulatory approval to begin clinical trials. Based on promising early clinical results, in November, the European Commission signed a contract for the delivery of 405 million doses of the CureVac vaccine, subject to its regulatory approval.

CureVac was also the beneficiary of considerable external financial support. In January 2020, it received $8.3 million from the Coalition for Epidemic Preparedness Innovations (CEPI) to accelerate vaccine development. In June, the German government invested €300 million, receiving a 23 percent ownership stake in the company in return. To add production capacity at CureVac’s Tübingen plant, the European Investment Bank loaned the company €75 million in July, with the German government providing another grant for up to €252 million in September.

CureVac developed a complex production network to manufacture the vaccine at commercial scale. Like BioNTech, Moderna, Novavax, AstraZeneca, and even Johnson & Johnson, it contracted with other firms to make its vaccine even before it was granted regulatory approval (as explained in new research with Thomas Bollyky).

CureVac began signing up partner companies in November. At least seven sites run by as many different companies committed to manufacture its active pharmaceutical ingredient and mRNA (see figure). Germany would host production by CureVac in Tübingen, as well as through contractors Rentschler Biopharma in Laupheim, Celonic Group in Heidelberg, and eventually Bayer in Wuppertal. GlaxoSmithKline would produce the vaccine at a plant in Belgium, Novartis would make it in Austria, and Wacker Chemie would do so in the Netherlands. Bulk quantities of the CureVac vaccine would then be shipped to two sites in France, where Fareva would “fill and finish” it—squirting doses into hundreds of millions of vials before capping and packaging them up for distribution. After reserving these facilities, CureVac transferred its technology, and the companies acquired the equipment and raw materials needed to start production at their plants. By April 15, 2021, CureVac reported that its network could manufacture 300 million doses by the end of 2021 and 1 billion doses by the end of 2022. 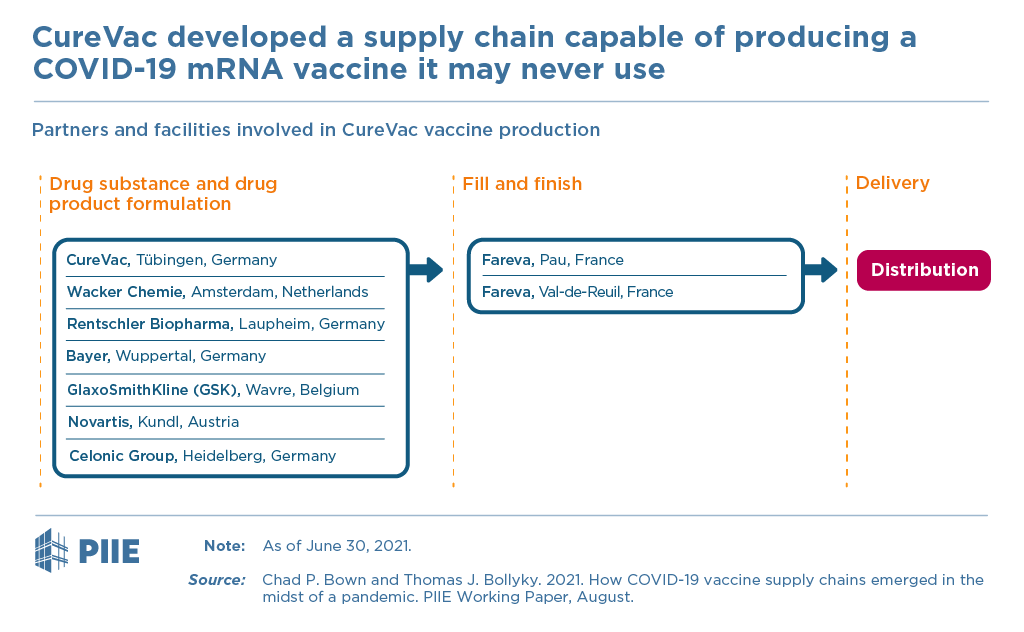 One thing COVID-19 has taught is to be skeptical of billion-dose promises; even the eventual success stories of Pfizer and Moderna suffered early periods of learning-by-doing. Yet signs point to CureVac having worked through many of those same growing pains to ramp up production in its brand-new supply chain. In the spring, CureVac executives were quick to recognize and address input shortages. CEO Franz-Werner Haas complained to Der Spiegel that “due to the Defense Production Act we are not getting certain goods out of the USA” but in response, policymakers helped it acquire key supplies, leading the company to tell Reuters that “CureVac is grateful that with the help of the EU and U.S. officials, some critical issues could be resolved.” Finally, on July 21—after publication of the weak clinical trial results—a Novartis executive stated, “We have started the production as planned. We are planning to deliver 50 million doses this year.”

Should it? Given the devastating CureVac Phase 3 trial announcement in June, would it be better for Novartis—as well as Bayer, GSK, and all of the other contractors—to repurpose their facilities and shift to manufacturing another COVID-19 vaccine instead? The world is desperate for billions more doses of effective vaccines now. CureVac’s supply chain had been preparing to manufacture doses based on the mRNA technology that vaccines from Pfizer/BioNTech and Moderna have proven most effective against the virus thus far.

Other supply chains were repurposed for vaccines during the pandemic

From the pandemic’s early days, pharmaceutical companies big and small made seismic reallocations of resources to help quickly scale up facilities to manufacture brand new COVID-19 vaccines. Some were done voluntarily, some through government collaboration, some the result of specific policy demands.

Production for other medicines sometimes needed to find new homes, at least temporarily. In May 2020, for example, Pfizer told Reuters that plans to ramp up production in house required offloading some of its normal business to contract manufacturers, at an estimated cost of at least $150 million. In order to bottle COVID-19 vaccines at an Indiana facility, in December, Catalent informed drugmaker Horizon that its thyroid eye disease treatment would need to move elsewhere. The Biden administration worked out a technology-sharing agreement so that Merck could manufacture the vaccine from Johnson & Johnson—a major industry competitor—at its plants, too. When cross-contamination by contract manufacturer Emergent BioSolutions forced tens of millions of doses of vaccines to be thrown away, the Biden administration moved AstraZeneca’s production out and turned plant management over to Johnson & Johnson. In Germany, IDT Biologika announced emergency plans to bottle the Johnson & Johnson and AstraZeneca vaccines, asking Takeda and Merz to give up the slots they had booked for their drugs.

Supply shortages of specific pieces of vaccine-making equipment and raw materials also led policymakers to step in. The United States used the Defense Production Act to prioritize access to critical inputs to vaccine manufacturers. When foreign companies—including the Serum Institute of India and CureVac—complained they could not access inputs, the US government tracked down and shipped off supplies. CEPI eventually developed the COVAX Marketplace to tackle part of the ongoing problem. Pitched as “a sort-of pharmaceutical equivalent of eBay,” it helps facilities unable to track down inputs—of bioreactor bags, single-use assemblies, cell culture media, filters, lipids, vials, and stoppers—from those with extra supplies, including plants set up by companies before obtaining regulatory approval but whose candidate subsequently failed to pass clinical trials.

Reallocating inputs or even a facility’s production line is one way to take advantage of the newly available resources. Doing so would involve stripping down CureVac’s supply chain for parts.

An alternative approach, with a potentially bigger payoff, would be to repurpose CureVac’s entire COVID-19 vaccine supply chain. Plugging another company’s vaccine technology into the CureVac network would save time and money. Why waste what CureVac has already done so well?

Repurposing the CureVac supply chain would not be easy. Governments would need to help dissolve earlier contracts and facilitate new ones between CureVac’s partners and the new vaccine sponsor.

The protection of intellectual property rights is always contentious, but it should be manageable. CureVac and its contractors would need to work out terms for licensing the vaccine technology from a firm like BioNTech or Moderna, which might worry that doing so would accelerate the ability of major competitors like Bayer, Novartis, and GSK to acquire mRNA expertise, reducing their first-mover advantage in other industry applications such as influenza, cancer, and HIV. These companies’ partnerships with CureVac meant that they were already gaining commercial experience with mRNA, however, and virtually all of these companies have indicated plans to be flexible to help address the health needs created by the pandemic.

The German government and European Commission have committed to getting companies to share their intellectual property within existing World Trade Organization (WTO) rules. Both have come out against alternative proposals to simply waive COVID-19 vaccine patents. Repurposing the CureVac supply chain would align with their approach, as well as efforts by WTO Director General Okonjo-Iweala to facilitate technology transfer to expand the supply of vaccines during the pandemic. In exchange for their help, policymakers should obtain commitments from companies in the revamped CureVac network to allocate a hefty share of the 1 billion doses to the COVID-19 Vaccines Global Access (COVAX) facility for distribution to lower-income countries.

Time is critical. Even if this proposal were agreed to, other steps would need to be taken before the CureVac facilities could start delivering some other vaccine. The plants might have to acquire some specialized inputs that the CureVac facilities did not have on hand. (Participation in COVAX could give them access to the new COVAX Marketplace to help quickly locate missing supplies.) The European Medicines Agency needs to investigate and certify the new production process.

Even if repurposing the supply network is best for global public health, CureVac may not have sufficient incentive to do so on its own. The company has an option to wait, as it is developing a second-generation COVID-19 vaccine candidate, which could work. It may need to be incentivized not to keep that supply chain warm while the world desperately awaits vaccines.

CureVac’s initial attempt at developing an effective COVID-19 vaccine may have failed. But the equally important effort the company put into creating a vaccine supply chain from scratch may still prove a success. COVID-19 has forced policymakers to get creative. CureVac’s supply chain work on behalf of global public health should not be allowed to go to waste.