Do Multinationals That Expand Abroad Invest Less at Home?

Summary: Underneath the political theatrics about the US budget, there is serious debate about how US taxes might be reformed. A key component in this debate is treatment of US multinationals when they engage in outward investment. In this column, we present evidence that foreign expansion by US firms is associated with increases in the domestic activities by those same firms, suggesting that policies penalizing firms for investing abroad will hurt, rather than help, the US economy.

There is a long history of politicians claiming that American multinational corporations (MNCs) "ship jobs overseas" when they invest outside the United States. President Obama, for example, has proposed special support for US firms that stay at home, and criticized those that move abroad.1 This line of attack implicitly assumes that expansion abroad by US firms substitutes for expansion at home, thus harming US workers. However, it is also possible that foreign expansion increases the productivity and market share of firms in a way that benefits US workers. Empirical studies on this topic have come to diverse conclusions. For example, Mihir A. Desai, C. Fritz Foley, and James R. Hines (2009) find evidence of complementarities, while Ann Harrison and Margaret McMillan (2011) obtain mixed results. 2

We take a fresh and up-to-date look at the extent to which MNC activity at home and abroad are substitutes or complements using confidential firm-level data on the activities of all US-owned multinationals over a 20-year period, collected by the US Bureau of Economic Analysis (Hufbauer, Moran, and Oldenski 2013). By employing panel regression methods, we are able to identify whether expansion abroad by a typical US MNC is associated with a reduction or expansion in the activities of that same firm on US soil. We include firm fixed effects, which allow us to examine changes within each firm over time, rather than comparing one firm to another, and year fixed effects, which hold constant everything external to the firm that was going on in a given year.

Figure 1 summarizes the relationship between US MNC activities at home and abroad. These results draw on firm-level data from 1990 through 2009, covering more than 1,500 US MNCs and their more than 10,000 affiliates. The first thing to note about the relationships between foreign direct investment (FDI) and domestic growth presented in figure 1 is that they are all positive. By any measure, increasing FDI by a US firm is associated with an increase in domestic US activities by that same firm. When a US firm increases the employment at its foreign affiliates by 10 percent, employment by that same firm in the United States goes up by an average of 4 percent. Capital expenditures and exports from the United States by that firm also increase by about 4 percent. Research and development (R&D) spending, which is associated not just with overall US employment but with employment in highly skilled and highly paid jobs, increases by 5.4 percent. The results are similar when increases in FDI are measured by affiliate sales or capital expenditures instead of employment. All of these positive relationships are significant at the 1 percent level.

Figure 1: Increases in foreign activity of US MNCs are accompanied by increases in domestic activity 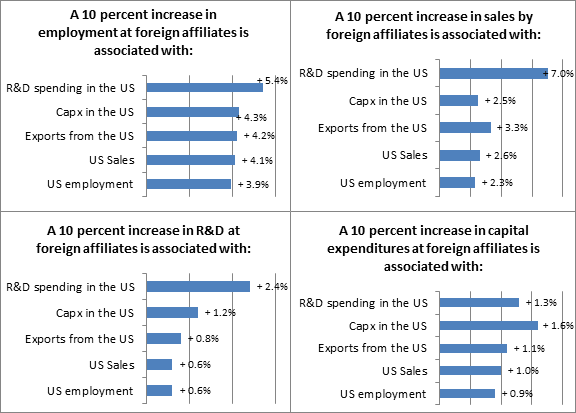 Our findings do not mean that certain aspects of overseas expansion never diminish similar aspects of home-country MNC activity. Quite the contrary, the spread of investment and R&D, like trade in general, is likely to result in reshuffling economic activity within as well as across sectors on both sides of borders. The point is that, given the multiple positive and significant relationships between increases in overseas activity and increases in jobs, sales, exports, investment, and R&D at home, summarized in figure 1 the dispassionate public policy analyst would have to bet that the aggregate result from outward FDI by US firms is strongly positive. Conversely, if overseas operations of US MNCs were restricted or made more difficult, the overall consequences would be less activity at home, not more.

Particularly striking is the novel investigation of outward R&D by US MNCs on the US domestic economy. Public discussion is full of zero-sum apprehension—overseas R&D by US multinationals means that the United States is "losing its edge," that others may "catch up," that US R&D jobs are "being lost" and "aren't coming back."3 But the evidence presented here shows clearly that when a US MNC increases its R&D abroad, it also increases its R&D, capital expenditures, exports, sales, and employment in the United States. Indeed, what is notable is the discovery that US firms that do not increase their R&D abroad do not tend to increase it at home, either.

The statistical analysis of the globalization of R&D by US MNCs is reinforced by case studies that offer practical examples showing how global R&D expenditures and operations of US MNCs may create complementary capabilities and interdependent competencies, rather than simply displacing one capability or competency from a location in the United States to location abroad.

One example is GE Healthcare's Magnetic Resonance Imaging Laboratory team operating between the Niskayuna, New York campus and the Munich, Germany campus. The team jointly operates four whole-body scanners that have created major innovations in magnetic resonance imaging (MRI), allowing exceptional anatomic investigation involving the brain, spine, and musculoskeletal system. The synergy between the two research centers has generated spillovers that flow back to the United States. GE's Munich labs provided the initial insights that led to 32-channel, then 64-channel, then 128-channel imaging. This research is now incorporated into the high-end premium MRI equipment that is designed and built in the United States.

It may seem counterintuitive that the creation of new offshore R&D facilities could increase the amount of R&D carried out in the United States, but that is what case studies sometimes show. The creation of an R&D campus in Chennai, India has allowed Caterpillar to create a 24-hour R&D cycle on engine propulsion and pollution control. The capital-intensive Caterpillar engine labs in Peoria, Illinois operate two shifts with hundreds of channels of temperature, pressure, and emissions data to map diesel performance and emissions. These streams are sent overnight to Chennai, where the data is analyzed and returned to Peoria ready for the US engineers when they come to work the next morning. The chief technology officer of Caterpillar points out that the cost for the engine tests would be much greater if Caterpillar instead had a third shift working in the United States, making the company's overall R&D process less efficient and leaving less room for US engineers to exercise their comparative advantage. Using the growing Indian talent pool affects US operations positively by increasing the through-put and lowering the cost of the asset-intensive US test facilities. Round-the-clock interactions between Caterpillar's Indian and US test facilities help ensure the company's international market leadership position, while enabling headquarters to hire more US engineers.

On the basis of the findings presented here, US policymakers can expect that measures taken to impede or retard US MNC expansion abroad will weaken job creation, investment, R&D, and exports at home, rather than strengthen or enhance domestic economic activity.

This post originally appeared on Vox and is republished here with permission.

1. For the most recent iteration, see the 2012 State of the Union speech.

3. See the chairman's comment in the press release for the 2012 National Science Foundation Report on the globalization of R&D (accessed March 25, 2013).

To Unleash an Infrastructure Boom, Turn to the Private Sector