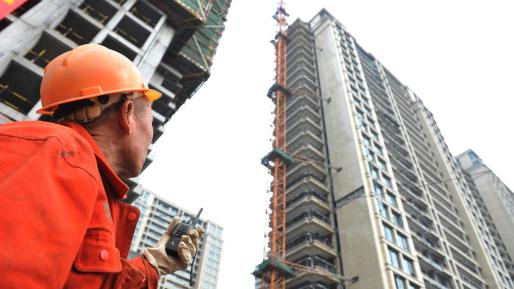 China Evergrande, which has the dubious distinction of being the world's most indebted real estate developer, is gripped by a solvency crisis that began more than a year ago. And the crisis affects not just Evergrande. A growing number of Chinese property developers are facing financial strain, while property sales and home prices in China are falling sharply. The Chinese government, worried that an engine of growth is losing steam, is struggling to keep the property sector afloat. Yet China's rescue measures are mostly short-term solutions to a larger long-term problem. In fact, Evergrande is a leading indication that China's model of property-led growth is unsustainable and needs to change.

A government working group and a risk committee, made up of mostly senior executives from Chinese state-owned enterprises, have been set up recently to deal with the crisis at Evergrande. It remains unclear how the government will sort out the Evergrande problem, but it could follow the model of HNA Group, another heavily indebted private conglomerate that the government eventually took over. If that happens, debt restructuring will inflict losses on investors as the company splits into several smaller independent entities.

Evergrande is hardly the only real estate problem facing China. If, as expected, property sales and home prices keep dropping this year, China's economic growth will be imperiled. Property and related industries account for 25 to 30 percent of China's GDP. Banks will be saddled with significantly more nonperforming loans on their books, since 27 percent of all loans Chinese banks hold are related to property, including mortgages. The shadow banking sector, which includes trust companies and is an important funding source for Chinese developers, will be hurt as well.

The problems extend to local governments, which on average receive nearly 40 percent of their total fiscal revenue from land sale proceeds. With land sales more difficult, coupled with the impending decline in revenues related to those sales, local governments may have to cut public services. Worsening fiscal conditions of local governments can in turn lead to more defaults by local government financing vehicles whose debt is usually collateralized by land parcels.

Equally worrying would be the potential political fallout. Nearly 60 percent of the total assets owned by urban Chinese households is property. That share is even higher for lower-income households. As a result, a sharp property price decline could trigger social unrest, something the Chinese government would want to avoid at all costs.

Beijing faces a classic dilemma between the need to rescue the debt-loaded property sector while avoiding moral hazard, the belief among property developers that the government will hold them harmless despite their reckless behavior. China's leadership has signaled its goal of stabilizing the property market in 2022. The central bank has cut the reserve requirement ratio and the benchmark one-year loan prime rate. Many believe these cuts are just the first steps. Greater fiscal stimulus, including a renewed focus on infrastructure investment, is also on the horizon.

The Chinese housing boom is fueled by financing from local governments, whose budgets rely on proceeds from land sales and taxes related to property development. Some coastal provinces get more than half of their revenue from these sources, giving them little incentive to bring down local property prices.

Compounding the problem, the central government restricts the land supply in top-tier cities while encouraging the expansion of small cities and towns, despite the fact that younger people prefer living in top-tier metropolises. This mismatch has led to unaffordable housing costs in cities like Beijing and Shanghai, where the housing price to household income ratios are among the highest around the globe. Shortsighted local governments in these large cities welcome soaring land prices to meet their own financing needs.

On the other hand, property developers, whose debt ratio is as high as 80 percent, keep leveraging their assets, including land plots and property projects under construction, to borrow from banks and nonbanks in order to purchase new land plots from local governments and develop housing projects. When land prices go up, their collateral is worth more and they can borrow more. In a nutshell, the interests of local governments, property developers, and banks are closely aligned, and this entire model relies on high property prices to work. But these combined factors are creating a dangerous situation for the Chinese economy.

Skyrocketing real estate related loans, including mortgages, are weighing on the economy, squeezing the financial resources allocated to more productive sectors other than property. From the end of 2011 to the end of September 2021, the share of property-related loans, including mortgages, in the total loan balance has increased from less than 20 percent to more than 27 percent, according to the People's Bank of China. At the same time, total mortgage balance as a share of property-related loan balance increased from two thirds to more than 70 percent.

Despite these danger signs, mortgages have remained quality assets on the balance sheets of Chinese banks, according to China's banking regulator. The nonperforming loan (NPL) ratio for mortgage loans is the lowest among all types of loans, which may be because of the relatively high down payment requirements in China, typically 30 percent for first-time buyers and higher for other types of buyers in most cities. By contrast, the quality of property development loans has been deteriorating in recent years. The NPL ratio for that type of loan across the banking sector has increased nearly threefold from 0.48 percent in 2013 to 1.3 percent 2019.

An additional worry is that many Chinese developers, including Evergrande, rely on shadow banking channels such as trust companies to finance their activities. The total balance of lending from trust companies to the property sector is roughly RMB2 trillion, according to the China Trustee Association. Trust company loans account for more than 40 percent of Evergrande's total financing. Recent credit events involving real estate developers have already caused considerable damage to the shadow banking sector.

All these factors make it clear that China must change its property-led growth model. Local governments addicted to land sales for income have to look for alternative sources of fiscal revenue. One source could be a nationwide property tax on homeownership, a solution that China is now in the process of introducing. But whether such taxes can wean local governments off of land transfer fees is uncertain. Property taxes introduced in 2011 on a trial basis in Chongqing and Shanghai have largely failed to tame the local housing frenzy; because these property taxes have low rates and apply to only a narrow range of houses and buyers,[1] they have contributed only 3.6 percent and 2.5 percent respectively of these cities' fiscal revenues, or 7 percent of local land sale proceeds. Local governments could tap another source of revenue by collecting more dividends from local state-owned enterprises. But overall, China needs to address the struggle local governments face to make ends meet.

China's top-tier cities must find alternative ways of meeting the rising demand for housing while curbing speculation in the housing sector. Some cities, including Chongqing and Chengdu, have created new land quotas for urban housing development by increasing the arable land supply in rural areas and establishing land quota markets. Somehow China's property crisis must be solved if the country is to achieve its ambitious goals for economic growth.

Examining Belt and Road: The Lending Practices of the People's Republic of China and Impact on the International Debt Architecture