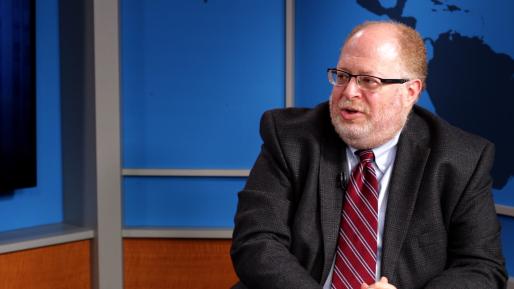 Britain’s decision to part ways with the European Union will hurt the United Kingdom’s economy and generate a great deal of uncertainty that could roil financial markets for some time, said Adam Posen, president of the Peterson Institute for International Economics, in an interview.

Posen believes the pound’s steep decline will be of limited benefit to the country’s growth prospects given the damage from what he called a “fundamental change in their competitiveness.”

He also said the currency’s freefall would complicate any potential attempt by the Bank of England to stimulate the economy if it slips into recession.

What follows are key excerpts of the interview.

What’s the likely impact on the UK economy? Its neighbors?

Adam Posen: Like any reasonable economist I’m very saddened by the vote, because the great consensus was, and rightly, that this was going to be very damaging for the UK, potentially quite damaging to Europe. For the UK this creates enormous uncertainty, but it also is a fundamental change in their competitiveness. And I don’t think even the very large fall in pound sterling that we’ve seen is going to be enough to make up for that. They had a role in Europe as a financial center and even almost more importantly as a beachhead for foreign companies, particularly US companies wanting to export into Europe. And that’s frankly going to go away, not entirely but a lot more and a lot faster than many people seem to think.

If Tata has a choice of which steel plants to close in the world given the huge surplus in steel, no point in keeping open the ones that don’t have direct access to Europe. That decision is going to be made by a lot of firms. We’ve seen bank stocks of British-based banks take a huge hit. As our colleague Nicolas Véron has pointed out, roughly 30 percent of British banks’ business is euro-denominated and that will shift back to Europe once the UK is out of the single market. So it’s going to be bad, but also huge uncertainty over what the nature of the relationship is going to be. We’ve seen a collapse in housing and business investment in the UK over the last month as people realized they might lose the vote. And I expect that to continue.

Where does this leave the Bank of England?

Adam Posen: Governor Carney and the Bank said the right things—both what they said and in what they didn’t say. The part that they said affirmatively, which was right, is that if there was some kind of panic or run of people wanting to get out of the pound, or out of the British banks, there would be plenty of liquidity, foreign currency would be made available—there’s no reason for people to panic. And as we’ve argued here at the Institute, there are exceptions, but the world’s banking system, and the British banking system specifically, is much less leveraged, much better capitalized, much better monitored than it was ten years ago. For those reasons, it’s right for Governor Carney and the Bank to send a reassuring message.

But notably he did not say we’re going to cut rates, we’re going to stimulate—because he wants to be cautious about the timing but more importantly the direction. Normally you have a recession in the economy, the central bank acts to offset it, it cuts rates. Well, you’ve got two things working against that right now. The first is, this really big sustained drop in the pound—which I think will be sustained, I think it’s a legitimate revaluation down of the pound—is likely to have big inflationary effects. And with so much uncertainty about British economic policy and politics going forward, the Bank of England might feel it needs to raise rates to counteract those effects in a way that, in normal times, absent Brexit, they could say, well, it’s a big shift but it’s not going to keep going. The second thing that constrains the Bank of England is the same thing that constrains the European Central Bank, the Swiss National Bank, the Bank of Japan, and to a lesser degree the Fed, which is basically you’re at zero interest rates. They’re above zero, they could cut a bit. But normally when you have a recession you want to do something in the order of 200.

They could do QE [quantitative easing], as my colleague Joe Gagnon and I have argued, but they would have to do an awful lot to make up for what 200 or 400 basis points in cuts would be. The exchange rate will partially cushion the blow. But I also believe since the exchange rate fall is really driven by real factors, it’s not going to do that much good.

Britain Is Becoming an Emerging Market