Is the Brazilian Central Bank Coming to Grips with the Country’s Balance Sheet Recession?

After months of waiting for the Brazilian Central Bank to move more aggressively on interest rates as the country’s historic recession continued unabated, the monetary authority has finally cut the reference rate (Selic) by 75 basis points and signaled that it is ready to move at this pace over the next few months. Although the monetary policy committee has yet to state its views on the economy and on the drivers for the latest decision, a substantial drop in inflation at the end of 2016 and the possibility that Brazil is mired in a balance sheet recession may have weighed on the verdict to cut more aggressively. While a more intense easing cycle should certainly be helpful, balance sheet recessions are complex and require a lengthy process of deleveraging that hampers a rapid recovery in consumption and investment.

A balance sheet recession is essentially the end-result of a cycle of unsustainable policies that lead to excessive debt build-up in different sectors of the economy. When a credit boom turns into a bust, businesses, households, and even the public sector realize that the liabilities they accumulated during the boom period are no longer matched in value by the assets on their balance sheets. Put differently, asset prices begin to fall when the economy tips into recession, which sets off a rapid deterioration in net worth. The economy may go into recession for several reasons, including because of incoherent policymaking in the recent past. In Brazil’s case, the full set of inconsistent policies that led to the recession, adopted under Dilma Rousseff’s government, were documented in table 1 here. As the recession deepens, leaving balance sheets in tatters, firms and households find themselves having to use their meager cash flows to pay down debt, rather than to consume or invest. Deleveraging therefore worsens the recession, setting off a downward spiral that is very difficult to short-circuit.

In some cases, the public sector may be able to contain the adverse loop by assisting households and companies directly or indirectly. It may facilitate debt renegotiations, provide relief for growing tax arrears, or stimulate the economy through expansionary policies. Brazil, however, did not have such luxury. From the outset, the current crisis was diagnosed as a problem of fiscal unsustainability, implying that the government had no room to absorb private sector liabilities or to provide any kind of relief because it was also facing a potential debt crisis of its own. After Rousseff’s fall, Michel Temer’s administration proposed important fiscal reforms aimed at resolving the country’s medium-term debt unsustainability, enacting legislation to limit expenditure growth over the next several years. The strategy, however, ignored the excessive debt problems in the private sector—particularly the corporate sector—and monetary policy remained tight despite signs that the recession was actually worsening in the second half of 2016, not turning into a recovery as most had expected would happen with the change in government precipitated by Rousseff’s impeachment in May, and final removal from office in August. The Gordian knot facing Brazil was discussed in depth here, where the dramatic situation of subnational finances was also underscored.

Since expansionary fiscal policy to deal with the country’s balance sheet recession was not an option, why did the central bank wait so long before it decided to aggressively cut rates? Figure 1 below shows the evolution of inflation, growth, and real interest rates over the past decade. High inflation and unanchored expectations were part of the reason, as was the fear that the new team at the helm of Brazil’s monetary authority would see its credibility damaged by reducing rates when prices were still increasing sharply. 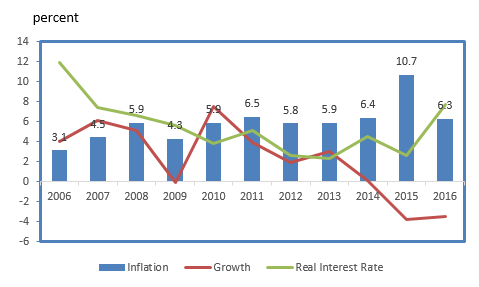 Source: Central Bank of Brazil and IBGE (National Statistics Office). 2016 growth is the author’s own estimate.

In recent months, however, inflation fell dramatically, ending 2016 within the central bank’s inflation target range of 2.5 to 6.5 percent, albeit still far from the mid-point target of 4.5 percent. Part of the explanation for the rapid fall in prices at the end of the year was evidently the unprecedented drop in economic activity since 2015. It is noteworthy that despite the deepest recession on record, the monetary policy stance led to much tighter conditions—measured by the rise in real interest rates—which may have contributed to the sharper contraction observed during the second half of last year.

While the central bank should be commended for the decision to move more aggressively on monetary policy, thus allowing the urgent deleveraging process to happen at a faster pace, it is possible that balance sheet deterioration intensified in the months prior to the latest action on interest rates. It is therefore plausible that Brazil’s woes are far from over, which is particularly worrisome in light of what the incoming Trump administration may mean for US monetary policy. The potential for expansionary fiscal policy in the United States under full employment could drive the Fed to faster and more intense monetary tightening. If this came to pass, currency turmoil in emerging markets could force the Brazilian Central Bank back into a cautionary stance, damaging the prospects for easing out of Brazil’s balance sheet recession.