Public discourse on the state of public finances across the world focuses on government debt-to-GDP ratios. However, projected increases in age-related spending (health care and pensions) can fundamentally alter our views on which countries will need to undertake the most fiscal adjustment during the next 10 or 20 years. This blog post draws attention to important statistics published biannually by the International Monetary Fund's (IMF) Fiscal Monitor, which deserve the attention of policymakers, investors, and the public at large.

Figure 1 reports the gross general government debt-to-GDP ratio at end-2014 for several advanced economies on the horizontal axis. In the aftermath of the Great Recession, which caused the largest and most pervasive increase in debt ratios since World War II, these data are familiar: Japan has the highest ratio at over 200 percent, most large European economies and the United States are in the neighborhood of 100 percent of GDP, and only a handful of advanced economies have debt ratios at or below 50 percent. Although some readers may be used to seeing the data for the federal debt alone in the United States, the gross general government debt (which includes the debt of subnational governments, such as individual US states) is used here for international comparability.

Underexplored data on health and pension spending projections are reported along the vertical axis. Specifically, the measure reported is the net present value of the additional (cumulative) spending on health care and pensions that is projected to occur in 2014–50, compared with the levels in 2013, and expressed as a share of 2013 GDP. Country rankings by this measure are strikingly different from those based on conventional government debt ratios. The highest net present value of additional age-related spending is projected in the Netherlands and the United States. Among the lowest are the Czech Republic, Denmark, France, Italy, and Sweden, where reforms in past years have reduced the projected increase in age-related spending. Japan fares better than average by this metric. Countries in the top, right-hand quadrant (Belgium, United States) both have higher-than-average government debt ratios at end-2014 and larger-than-average increases in age-related spending coming up in the next couple of decades. Countries in the bottom, left-hand quadrant (Czech Republic, Denmark, Germany, Slovak Republic, and Sweden) fare well, compared with the average, on both government debt ratios and projected age-related spending. A similar logic applies to interpreting the remaining two quadrants. 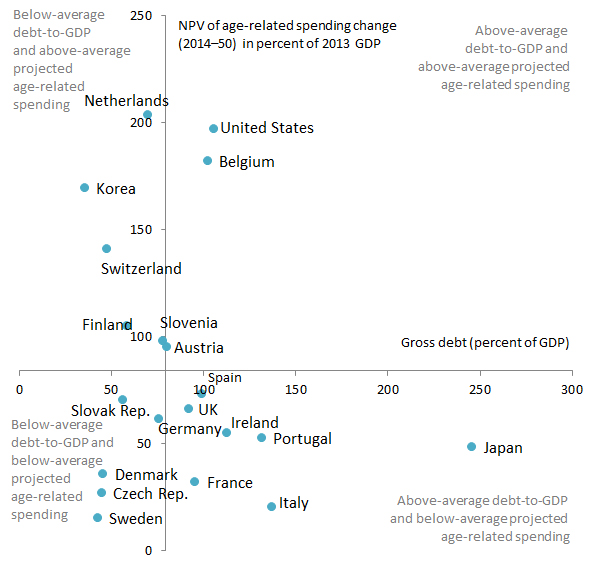 What Are the Implications for Needed Fiscal Adjustment?

An illustrative exercise regularly reported in the IMF's Fiscal Monitor asks how much the cyclically-adjusted primary fiscal balance (CAPB) needs to be improved by 2020 (and subsequently maintained until 2030) in order to bring the debt-to-GDP ratio down to 60 percent of GDP in 2030. There is nothing special about 60 percent: It was the median debt-to-GDP ratio for advanced economies in 2007 (just prior to the Great Recession) and simply serves to give a common reference point for this exercise. The primary fiscal balance is the overall fiscal balance (revenues minus expenditures), minus interest payments, which are often outside the control of the government. The cyclical adjustment cleans the fiscal data from the impact of differences in countries' positions in the economic cycle. In other words, the CAPB is the most accurate measure of the government's fiscal effort, stripping out changes in interest rates and GDP that are beyond its control. Figure 2 reproduces the needed improvement in the CAPB (light gray bar) for the larger advanced economies. The black bar in figure 2 adds the projected additional, age-related spending (per year) that each country will have to undertake by the year 2030. The forthcoming increase in age-related spending will require offsetting measures in revenues, other types of spending, or age-related spending itself, and will thus require additional fiscal effort compared with that depicted by the white bars.

As is evident from the figure, countries' rankings in terms of the future fiscal effort needed are overhauled when information on headline debt-to-GDP ratios is complemented by projections of age-related spending. When considering countries' need for fiscal adjustment, it is important to look beyond the existing stock of government debt as a share of GDP and to take into account the extent to which projected increases in age-related spending will add to the challenge of fiscal deficit reduction aimed at keeping government debt in check.

Paolo Mauro is senior fellow at the Peterson Institute of International Economics. Benedict Clements is division chief in the fiscal affairs department of the International Monetary Fund. The views expressed herein are those of the authors and should not be attributed to the IMF, its executive board, or its management.