With stock indices close to all-time highs and unprecedented monetary stimulus in recent years, it is reasonable to ask whether the US economy has reached a potentially dangerous phase of excessive financial exuberance and of overvaluation in the stock market in particular. In February Yale economist Robert J. Shiller, author of the book Irrational Exuberance, advised investors to reduce their equity exposure, arguing that stock valuations were higher than at any earlier period except in 1929 and in the dot-com bubble, based on his cyclically adjusted price-earnings measure.[1] More recently, the Federal Reserve’s Vice Chairman Stanley Fischer cited the fact that price-to-earnings ratios are in the top 20 percent of their historical distributions, along with low corporate bond spreads, as evidence of high risk appetite.[2] The evidence in this blog posting suggests, however, that because of low inflation, low unemployment, and low interest rates, there is considerable justification for the relatively high price-earnings ratios.

Figure 1 shows the cumulative 5-year percentage increase in Standard & Poor's (S&P) 500 index over the past half century. Although the 78 percent increase in the index from end-2011 to end-2016 can only be viewed as robust, it remains far more modest than the 220 percent increase from end-1994 to end-1999 in the dot-com bubble. 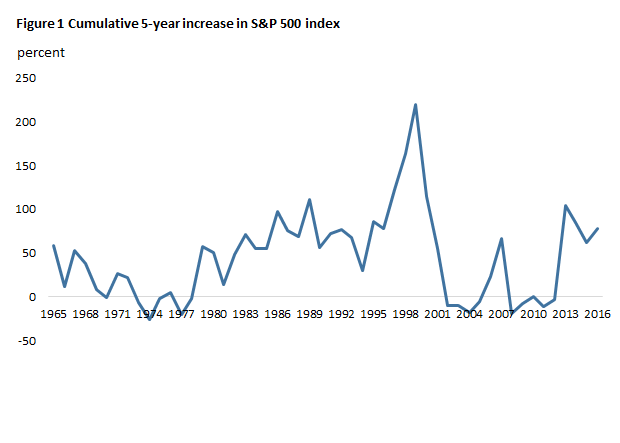 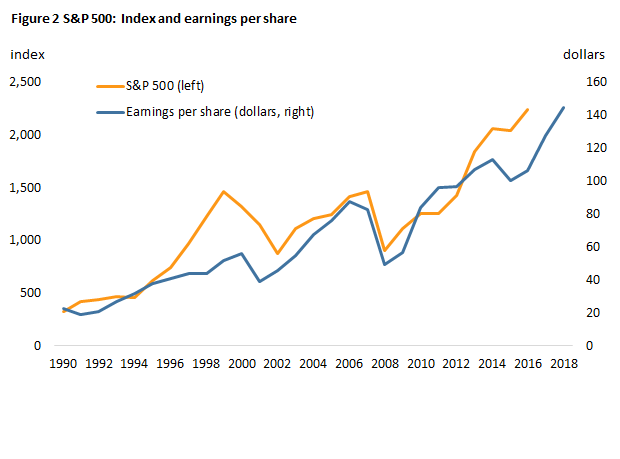 Nonetheless, the figure also shows that whereas the S&P 500 tracked earnings from about 2002 to 2012, since then the index has opened a sizable gap above the earnings path. This divergence reflects an increase in the price-earnings (P/E) ratio from an average of 17.1 in 2002–12 to 21.1 in 2016 (trailing operating earnings). The question is whether this increase in the price-earnings ratio has been warranted or speculative.

A simple statistical model does a relatively good job of explaining the path of market valuation over the past 56 years (figure 3). The model relates the price-earnings ratio to three macroeconomic variables: the yield on the 10-year Treasury note, the unemployment rate, and the rate of inflation. A higher long-term interest rate, and therefore higher rate of time discounting of future earnings, should mean a lower present value of the future stream of earnings, reducing the P/E ratio. Higher unemployment implies lower profits, shifting down the future stream of earnings being discounted, and thus the stock price relative to present earnings. High inflation, separately from a high interest rate, serves as an indicator of uncertainty and of likely future increases in interest rates. Finally, one needs to include a dummy variable to account for the animal spirits of the dot-com years.[4] 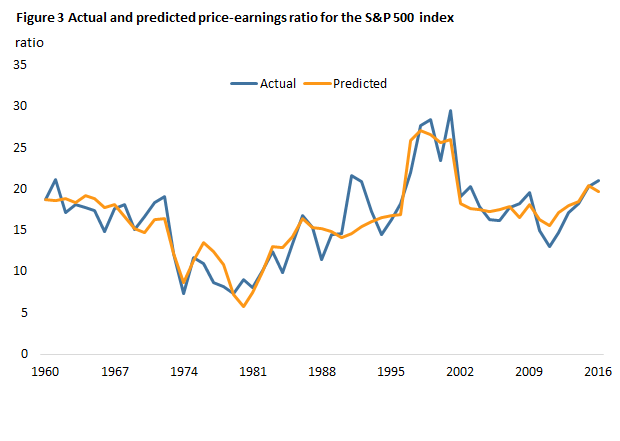 In the figure, high inflation drove low price-earnings ratios in the 1970s. High interest rates kept the P/E ratio relatively low in the early 1980s. The ratio surged in the dot-com period but normalized by 2002. Despite the Great Recession, the P/E ratio was surprisingly stable from 2007 through 2009, as the collapse in inflation and the reduction in the interest rate offset the surge in unemployment. The recent trough in the predicted P/E ratio was in 2011 when inflation reached 3.1 percent. The actual P/E ratio was well below the predicted level, reflecting uncertainty from the euro area debt crisis and US debt-ceiling standoff. During the past five years the predicted P/E ratio has been relatively close to the actual level.

At the end of 2016, the actual P/E ratio was 21.1, whereas the model predicted 19.7, indicating market overvaluation by 7 percent. Using the 12-month earnings through June 2017, at mid-year the actual P/E ratio was still 6 percent above the model prediction. However, as shown in figure 2, earnings are expected to rise substantially through 2018. In contrast, the model prediction for the P/E ratio is for little change (from 19.7 at the end of June to 19.2 by end-2018). This projection adopts private sector consensus numbers for the macroeconomic variables (with 2018 estimates at 3.0 percent for the 10-year rate, 4.2 percent for unemployment, and 2.1 percent for inflation).[5]

The combination of a steady P/E ratio with rising earnings means that the model implies a rising S&P 500 through 2018. Figure 4 shows the actual and predicted levels of the index at year-end from 2007 through 2016 and as projected for 2017 and 2018. 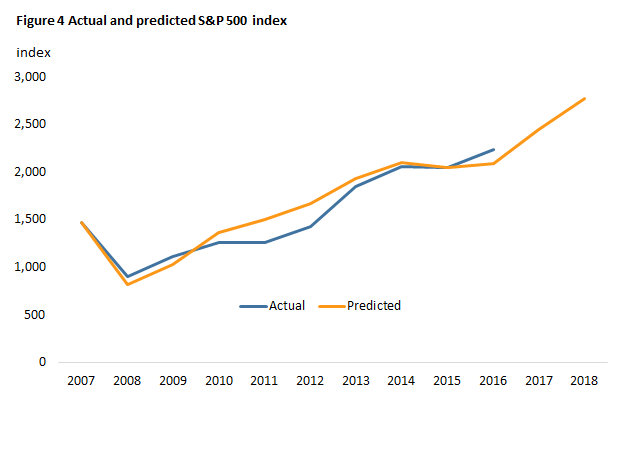 As shown in figure 4, the brisk rise in earnings currently expected in 2017 (by 20 percent) and 2018 (13 percent) means that the recent overvaluation by 6 to 7 percent is more likely reflecting anticipation of improving fundamentals than speculative excess. So the broad answer to the question posed in the title of this post would seem to be: Yes, but not by much. Low inflation, low unemployment, and low interest rates justify higher valuations than might be expected from past averages, even excluding the period of high price-earnings ratios in the dot-com bubble. Moreover, rising earnings could push the market higher, even if valuations ease back to the predicted path.

Despite the rhetoric, US-China financial decoupling is not happening

CBO and Markets Agree: The 2017 US Tax Act Will Not Raise Stock Prices Much