That 70's Show: Has the Recession Broken Okun's Law? (And Why Did the White House Not Want Larry Summers to Talk about It?)

The Federal Reserve Bank of Dallas recently suggested the US labor market in the current recession is now breaking the law—Okun's Law, that is.1 Larry Summers would seem to agree. In a revelatory aside during his speech at the Peterson Institute on July 17, the head of President Obama's National Economic Council joked that "there was a fight as to whether I was allowed to say this now that I worked at the White House," as he explained how there is now a "significant residual in the Okun's Law relationship" between unemployment and GDP contraction. The recession, he asserted, had produced higher joblessness than has been the case historically for economic downturns.

In practice, however, Okun's Law is a flawed analytical tool. The relationship between unemployment and GDP fluctuations is unstable, and affected by such factors as rising female labor force participation, productivity/wage slowdowns and changes in corporate structure and organization principles.3 More recent macroeconomic text books have therefore revised the Okun's Law relationship down to a coefficient of 2 or 2.5, i.e. that the unemployment rate instead increases by one percentage point for each for each 2–2.5 percentage point shortfall in GDP growth relative to potential.4

The commentary from both the Dallas Fed and Summers suggests that Okun's Law may need to be adjusted again in light of the current recession. One way to illustrate where we are right now in the Okun's Law relationship is to plot it over time using quarterly GDP and unemployment data. This is done in figure 1 from Q1 1983 until the most recent data for Q2 2009.5 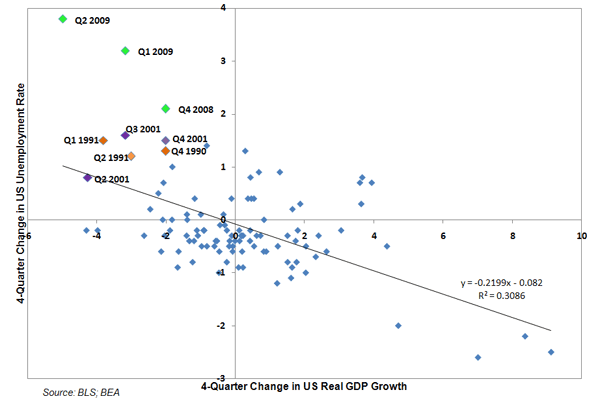 Figure 1 show how the last three quarters have indeed been far outside the historical range of the Okun's Law relationship in the US, which can be seen generally clustering relatively closely to the fitted line. Figure 1 illustrates how—with Q4 2008, Q1 2009 and Q2 2009 far above the fitted line—US unemployment has been rising far faster compared to past declines in GDP growth. As the Dallas Fed described—it's clearly breaking "the law". Moreover, figure 1 illustrates how the Okun's Law relationship is behaving very differently during this recession, relative to the two previous US recessions in 1990–91 and 2001. In both the two previous recessions, the unemployment-GDP relationship stayed far closer to what the historical Okun's Law relationship predicts.

The current recession is far deeper and has lasted longer than either the two previous US recessions, however. It is more instructive to compare it to earlier and deeper US recessions from the 1970s and early 1980s. This is done in figure 2, which shows the US Okun's Law relationship from Q1 1971 to Q2 2009. 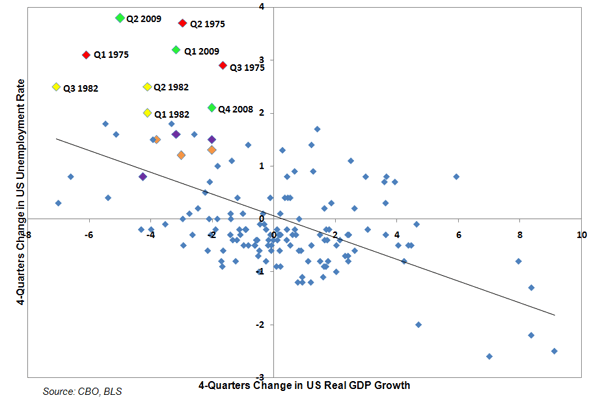 Accordingly, the US Okun's Law relationship has not been broken, but instead needs to return to something closer to its original formulation. That is hardly good news. If the economy is today closer to what it was in 1975, we should remember how long, difficult and painful the "malaise recovery" was.

What seems plausible is that the disruption in financial markets after the collapse of Lehman Brothers, combined with a cash-flow disruption for businesses and predictions of a long slump, discouraged US employers from hanging on to their employees during the downturn in hopes of a quick recovery. Instead of "hoarding" workers, businesses shed more workers than usual.

In addition, as will be shown in a forthcoming study I am working on, a greater share of the US economy today is undergoing structural change than has been the case in previous decades. Combined with the record current level of long-term unemployment in the US (29 percent of the total in June 2009 were unemployed for 27weeks or longer, the highest ever recorded by the BLS since records began in 19486), this suggests that the structural level of unemployment in the US has rising rapidly in recent months. Not only could we be back in the 1970s, we may also be going through changes in employment that we have never seen before.

This posting is taken from the discussion of structural and cyclical employment changes in the US economy in: Kirkegaard, Jacob F. (2009, Peterson Institute for International Economics) Structural and Cyclical Trends in Net Employment Over US Business Cycles 1949–2009: Implications for the Post-Industrial US Services Economy.

5. The unemployment rates on the X-axis refers to the quarterly BLS CPS US national unemployment for 16y and older and the real GDP data on the Y-axis is standard quarterly BEA data from NIPA table 1.1.6. Unemployment data is lagged one quarter to allow for the delayed response of unemployment to changes in output growth. This lag further facilitates the utilization of the latest available data at the time of writing, such that Q2 2009 refers to Q1 real GDP data (rate of change from Q1 208 to Q1 2009) and Q2 unemployment data (rate of change from Q2 2008 to Q2 2009). Figures 1 and 2 are robust to reproductions relying instead on estimated US output gaps and potential growth rates prepared by the CBO in the most recent "Budget and Economic Outlook: Fiscal Years 2009 to 2019" in January 2009. .