Federal cash transfers in the COVID-19 pandemic are going to millions of American families who cannot or will not spend all of that money in the current fraught environment. As a result, the US net private saving rate in 2020 will be the highest since World War II. The economic significance of this large amount of savings is unclear. But it could mean that, as restrictions on business and personal activities are relaxed in coming months, aggregate demand will rise, accelerating economic recovery but causing a temporary uptick in inflation to the extent that demand exceeds aggregate supply.

Any rise in inflation likely would be mild and would be welcome in light of persistent shortfalls of inflation below target in recent years. It might even provide a good opportunity for the Federal Reserve to adopt a slightly higher inflation target as Chris Collins and I previously recommended.

To be sure, the COVID-19 pandemic and the health policy response in recent weeks have caused an unprecedented collapse in private consumption as restaurants, retail outlets, tourist attractions, theaters, and a host of other businesses have been forced to close, while increasing the risk to those who must remain at work, including those battling the pandemic on the front lines. The worst unemployment rate since the Great Depression has put the livelihoods of vast numbers of American families on hold, with many worried about how to pay for food and rent. At a PIIE virtual event, Federal Reserve Chair Jerome Powell said that, among people who were working in February, almost 40 percent of those in households making less than $40,000 a year had lost a job in March. The damage may be long lasting if businesses are forced to close permanently.

Despite these circumstances, it is also true that many American families, perhaps most, will be receiving unemployment benefits and cash transfers that will meaningfully increase their bank balances and other savings more generally. What they do with their savings when a recovery occurs—whether they will go back to spending or be more cautious and continue to save—is unknown.

US GDP, the broadest measure of economic activity, declined modestly in the first quarter of 2020 and will likely plunge in the second quarter. Most forecasts call for a partial rebound in the second half of the year, with GDP remaining well below its previous trend at the beginning of 2021.[1]

The fiscal packages approved by Congress will increase the federal deficit to a level not seen since World War II. Most of the aid is directed at households earning less than $150,000 per year.[2] Many individuals and families are still waiting for their payments or may not realize that they qualify for aid, while undocumented workers and students about to graduate will not get much help. But most households should receive federal aid before the end of June. Unemployed workers who previously earned less than the median wage will receive unemployment benefits that exceed their previous wages for up to four months in addition to receiving $1,200 stimulus checks.[3]

The figure shows the history of US net private saving (in percent of GDP) as well as its projected values in 2020 through 2022 based on the May 9 projections of IHS Markit.[4] The private saving rate soars to around 22 percent in 2020Q2–Q3, declines to around 15 percent through the middle of 2021, and remains above 10 percent through the end of 2022.[5] Except for a brief period after the global financial crisis of 2008–10, the private saving rate was below 10 percent for more than 30 years through 2019. Declining population growth permanently reduced the trend saving rate, reflecting less need to build houses, offices, and factories to accommodate additional workers. 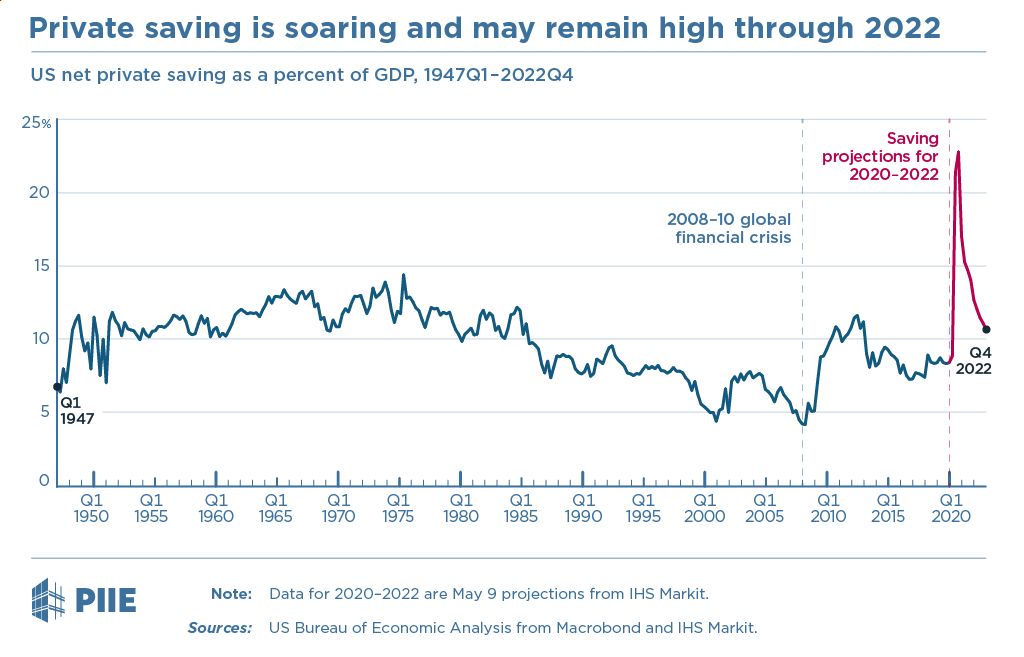 As forecasters have come to expect a less-than-complete recovery in the second half of 2020 and early 2021, Democrats in Congress have proposed a new fiscal package as large as the previous packages combined to support households, small businesses, and state and local governments over the next year or so. It is not clear what additional fiscal measures, if any, will be enacted. But any additional fiscal transfers would boost the private saving rate above the level shown in the figure.

Inflation moves up or down depending on the balance between aggregate demand and aggregate supply. Enforced business closures restrict aggregate supply, while stay-at-home orders also reduce aggregate demand. Anxiety about the future is also depressing consumer demand. The collapse in demand is putting downward pressure on prices—especially energy prices.

As restrictions ease, supply of goods and services will resume, though some businesses, such as those related to large gatherings such as sports, theater, and music events and amusement parks, may face restrictions for most of 2020 and perhaps 2021. Although demand is likely to be skewed away from these and other sectors such as hotels and tourism for a long time, the main restraint on aggregate demand is likely to be uncertainty about future income.

That ominous uncertainty could be countered by the buildup of private savings, however. Based on the May 9 IHS Markit projection, net private savings in 2020 through 2022 will cumulate to around $3.5 trillion higher than if they had remained at their 2019Q4 level, representing more than $25,000 per US household in additional savings by the end of 2022. If distributed equally across households,[6] that would more than double the $23,500 in financial assets held by the median household as of 2016 (Federal Reserve Board’s Survey of Consumer Finances). Accordingly, an increase in family bank balances could allay the uncertainty over future income and support more consumption.

Increased consumption spending may cause inflation to rise if supply restrictions linger. But if the unemployment rate remains high and it is possible to shift workers from shrinking sectors to growing sectors, economic growth could rebound faster than projected, accompanied by moderately higher inflation. That outcome would be desirable. Indeed, there are strong grounds for a moderately higher target rate of inflation. Should inflation increase by more than is desired, the Federal Reserve can easily tighten monetary policy and raise interest rates to get back to its inflation goal.

1. See, for example, the April 10 projections of the Peterson Institute for International Economics or the April 24 update from the Congressional Budget Office.

2. The main components of the aid package are (1) $1,200 checks for each adult and $500 for each child, which phase out above incomes of $75,000 for singles and $150,000 for couples, (2) an extra $600/week in unemployment benefits for all workers including self-employed workers who previously did not qualify, (3) grants to small businesses for payroll and rent with a salary cap of $100,000, (4) direct grants to states, localities, hospitals, and other agencies to defray extra expenses or lost revenue from the pandemic and keep workers employed, and (5) temporary elimination of some excise taxes and the deferment of employer payroll tax.

3. Those who lose employer-provided health care will have to pay for continued coverage out of pocket or face the risk of paying the expenses of treating a major illness.

4. Relative to the April 24 CBO forecast, IHS Markit forecasts a moderately larger decline in GDP in 2020 and a faster rebound in 2021. IHS Markit projects a similar increase to that of the CBO in the overall federal deficit in 2020 and 2021, but with relatively less of the increase in 2020 and more in 2021. The CBO has not issued a projection for the 2022 deficit; IHS Markit projects a large decrease in the deficit in 2022, but the level remains around $500 billion higher than it was in the pre-COVID-19 projection.

5. The highest previously recorded level of 14 percent was set during the recession of 1974–75, but private saving was surely even higher than that during World War II before the modern national accounts data were established.

High inflation is unlikely but not impossible in advanced economies