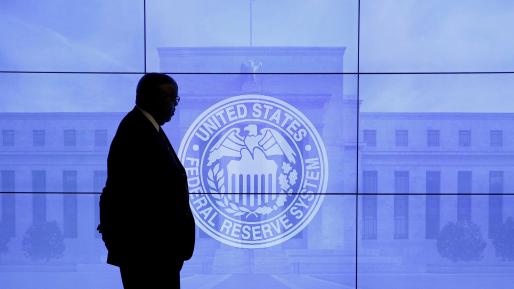 At a time when inflation has for years remained slightly below the Federal Reserve's target rate of 2 percent, a debate has broken out among macroeconomists over whether to raise inflation, and the target, further—for example, to 3 or 4 percent—by adopting an easier policy stance. But the debaters are all underestimating the benefits of raising the target. The case for higher inflation is stronger than previously understood.

The debate has drawn some distinguished experts into the fray. On one side, for example, are Olivier Blanchard, Jordi Gali, Adam Posen, and Lawrence Summers, who favor an inflation target of 3 or 4 percent, which would require the Fed to lower its policy interest rate in the near term. On the other are Ben Bernanke, Frederic Mishkin, John Taylor, and Janet Yellen, who favor keeping the target at 2 percent, out of concern that inflation higher than 2 percent would not be consistent with the Fed's statutory mandate of achieving price stability. This latter group may be open to temporary increases in the target after prolonged periods in which inflation was below target, as it has been recently.1

The debate focuses on the trade-off between the costs and benefits of higher inflation. Higher inflation makes it harder to compare prices when shopping or to evaluate investments when planning for the future. Nearly everyone would agree that consumers, workers, and investors do not like inflation (or deflation). But economists do not agree on how to quantify that preference, leading to bona fide disagreements on the costliness of a small increase in inflation.

There is less disagreement on the benefits of inflation, which mainly arise from the greater scope it gives a central bank to fight unemployment in a recession by cutting interest rates. The standard approach to assess the benefits is to simulate a model of the economy with random shocks and to see how often the central bank is constrained in its policy choice by the effective lower bound on interest rates.2 When the central bank is constrained, unemployment is higher than it would otherwise be. Raising the inflation target raises the average level of interest rates and reduces the frequency of hitting the effective lower bound. The benefit is lower unemployment on average.

The figure below shows that raising the inflation target not only increases the scope to cut the policy interest rate, but it also raises the scope to lower long-term yields with forward guidance and QE.4 The left panel, taken from our recent Policy Brief, displays the situation with the current inflation target of 2 percent. The current yield curve is the blue line. After a recession hits, the Fed could lower the short-term rate to –0.5 percent and longer-term yields would fall to some extent (the black line). Forward guidance and QE could be used to reduce longer-term yields further to their assumed lower bounds (the red line). The exact position of the effective lower bound is unknown; the line shown in the figure is an illustrative approximation. 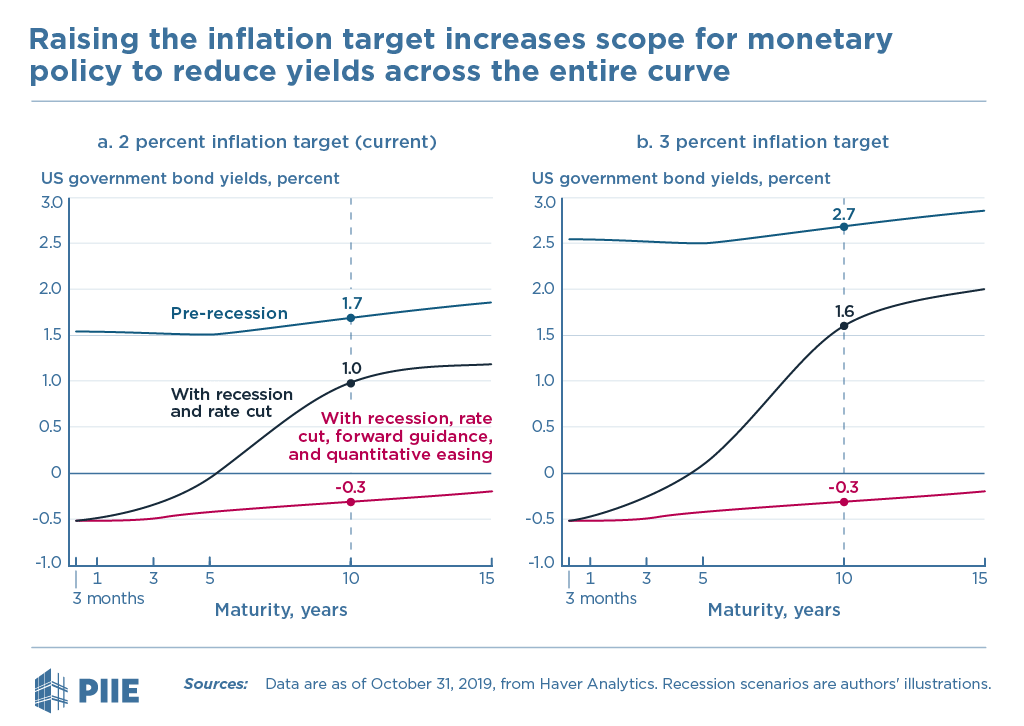 Simulations of the Federal Reserve Board's FRB/US model enable us to calculate how much of a cut in the short-term rate on its own would have similar macroeconomic effects as these combinations of short-rate cuts, forward guidance, and QE. In the left panel, the combined cuts in interest rates across the curve have a macroeconomic effect equivalent to a typical cut in the short rate of 5.2 percentage points. In the right panel, the combined cuts have an effect equivalent to a typical short rate cut of 7.6 percentage points.

1. Bernanke, Blanchard, Mishkin, and Summers presented their views at a Brookings conference in 2018. Gali's views are contained in this 2018 paper. Posen presented his views at a conference at the European Central Bank in 2019. Taylor's views are on his blog. Yellen published her views in a 2018 blog post.

2. The effective lower bound exists because paper currency yields a guaranteed rate of return of 0 percent. It was long thought that nominal interest rates could not fall below 0 because no one would lend at a negative rate when they have the option of holding currency with a rate of 0. (A negative rate means that interest is subtracted from one's investment on a regular basis instead of added.) However, paper currency is more expensive to use than electronic assets such as Treasury bills, which encourages people to continue using electronic assets despite modestly negative interest rates. The exact value of the effective lower bound is unknown and likely to differ across countries and over time. To date, interest rates have not fallen below ‑1 percent anywhere.

4. Andrade et al. (2019) reach a similar conclusion when using policy rules that imply long-lasting effects on short-term rates that are assumed to be fully credible, which may be viewed as a type of extreme forward guidance. Nevertheless, they put most of their focus on results using a simple policy rule without forward guidance, which implies much lower benefits of raising the inflation target.

5. Central banks need to take policy actions to push the economy above its long-run potential level to generate the higher inflation consistent with the new target. Expectations of future inflation are not likely to rise immediately with the announcement of a higher target, but only gradually as actual inflation is raised.