What Does Kaesong Export? Where Does It Go?

We were recently asked by a reporter whether it was possible that products from Kaesong are leaking into Korea’s trade with third countries. We were initially dismissive, and then decided that we actually didn’t know. What does Kaesong export, anyway? And where is final demand?

The data we present here are pretty aggregated (the so-called HS 2-digit level). Product categories are very broad and include a range of different items. for example, the category Nuclear Reactors, Boilers, Machinery, & Mechanical Appliances, Computers is HS  Code 84 and includes many industrial products; North Korea is clearly not exporting nuclear reactors to the South. But the information is nonetheless informative, and we will examine the data more closely (at the 6-digit level) in a subsequent post.

As can be seen in Table 1, apparel, textiles and fibers and yarn make up 40 percent of Kaesong’s exports; footwear adds another 7 percent. But the dominant category is a kind of catch-all of various types of electrical equipment that includes components and parts. The processing nature of the trade is confirmed by looking at South Korean exports to the zone (Table 2). As expected, inputs to the apparel and textile industry constitute a large share of South Korean exports (30 percent). But electrical equipment is both the largest export from Kaesong and the largest export to it (33 percent and 29 percent respectively).

We took a closer look at this electrical equipment category (HS-85 Electrical Equipment and Machinery) and it only compounds the confusion. A full list of products in this category at the four digit level is appended at the bottom of this post, and as can be seen it includes both intermediate or component goods such as electric motor parts and printed circuits as well as some final products like record players and televisions.

Why is this important? The standard image of Kaesong is that it is producing labor-intensive consumer goods for the South Korean market: travel bags, alumininum pots and pans, sweaters, that sort of thing. But we cannot rule out the possibility that electronic components are not only going into Kaesong but are coming out as well.

Why is this important? As we noted in an earlier post, Park has dangled the carrot of “globalizing Kaesong” in front of the North Koreans. In the context of some progress on North-South relations, Park promised that her administration would press for products from Kaesong to be treated not as North Korean, but as South Korean; they would thus receive the most-favored nation tariff treatment that South Korean exports enjoy with its WTO trading partners. Needless to say, North Korea is not a member of the WTO and does not enjoy MFN.

But there is more. South Korea is wild about free-trade agreements; it has more than any other Asian country to our knowledge. A recent catalog is displayed in Table 3. The “globalization of Kaesong” would not only grant Kaesong exports MFN but preferential trade under these multiple trade agreements Korea has signed This effort to globalize Kaesong would exclude the KORUS; the South Korean request for duty-free treatment of KIC products was side-stepped by setting up a bi-national commission to “monitor” the issue. Translation: kick the question down the road. There is no way that the US will grant duty-free access under current conditions, and indeed, Executive Order 13570 was issued prior to the Congressional vote to make this clear. 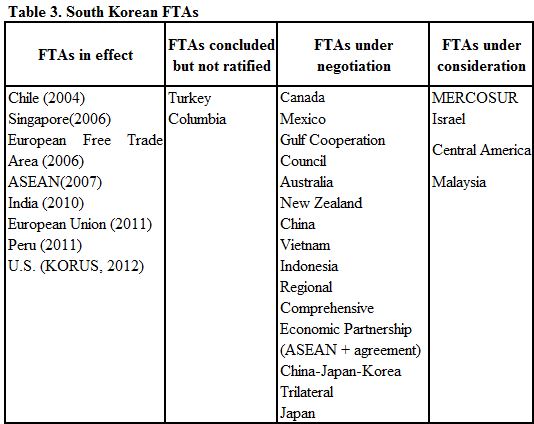 But other countries do not necessarily share the US penchant for sanctions, and could be persuaded that this is a rounding error decision that is not ultimately consequential. One specific example of such leakage was noted in a recent Yonhap news report (in Korean). An Indian auto-part manufacturer apparently cancelled its contract with Daewha Fuel Pump ind.,ltd.--a Kaesong firm--demanding full reimbursement of its products scheduled to be shipped. While the focus of the article is on the hardship such KIC companies are facing, it coincidentally supported the suspicion that their business is not limited to selling consumer products in SK. To watch: will the US go after these agreements and try to dissuade third countries from accepting Kaesong exports duty-free?

We did one final diagnostic: we looked at where South Korean exports of the two top Kaesong products go; (Tables 4 [electric] and 5 [apparel]). As can be seen, these are large markets and every one of them with the exception of Hong Kong is either an FTA partner of South Korea’s or has an FTA under negotiation. And some of them are not likely to care about Kaesong one way or the other 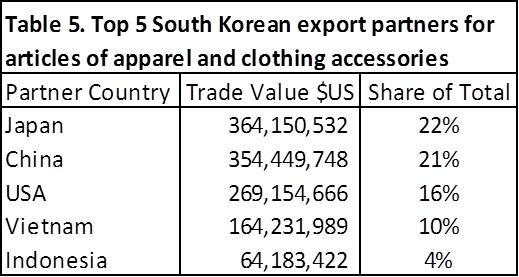 To summarize, at least some Kaesong products are leaking into South Korea’s trade with third markets. The new administration is intent on looking at this as a possible goodie in North-South talks if and when they resume. If they do, North Korea could become integrated into international production networks more quickly than we think. Our hope is that this might have a moderating effect on North Korean behavior, and so we are for it as part of what we call “the long game.” But we have been burned before; recent experience with Kaesong doesn’t suggest that it moderates much of anything; indeed, the North Koreans have been exercising a kind of reverse leverage by imposing pain on Kaesong-based firms and creating a constituency for engagement. 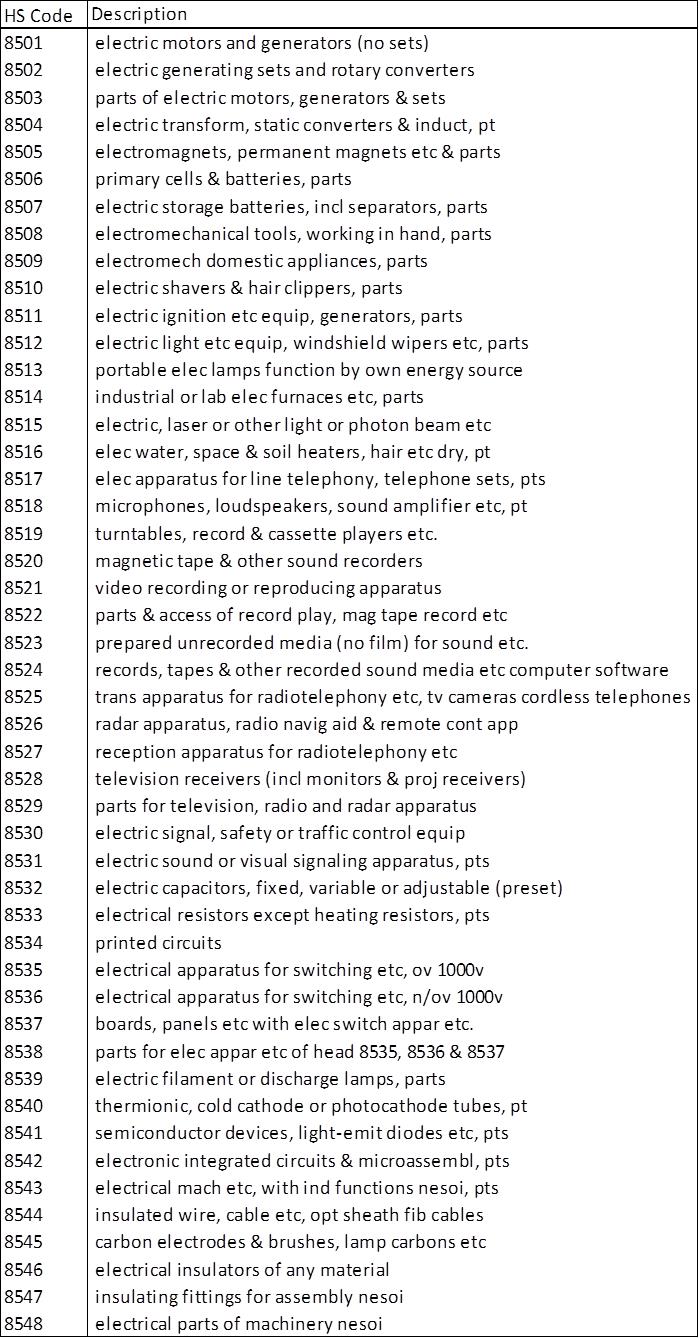