In her second run at the presidency, Park Geun-hye demolished a field of lesser conservative candidates in the primaries (Yim Tae-hee, Kim Tae-ho, Ahn Sang-soo and Kim Moon-soo) and scored a surprisingly comfortable victory in the general election against Moon Jae-in (we have it at 51.55 to 48.02, or over a million-vote margin). With weak third party contenders securing less than a half a percentage point of the vote, she became the first President elected since the democratic transition in 1987 to win an outright majority.

First elected from a Taegu constituency in 1998, she became known as the “Queen of Elections” for her ability to discipline her party and mobilize electoral support for a moderate, compassionate conservatism. In 2004, she saved the GNP from an expected humiliation in the National Assembly elections after the misguided attempt to impeach President Roh Moo Hyun. She even managed to cobble together a legislative majority by 2006 as Roh’s public support underwent the steady erosion that has plagued every president since Roh Tae Woo. Stepping down from the party leadership to prepare for her own presidential bid, she just narrowly missed becoming the GNP’s standard-bearer to Lee Myung Bak in 2007; the complex primary formula in the party awarded votes on the basis of both opinion polls and actual party votes, and though she won the latter, LMB outpolled her. And in April of this year, she was considered the mastermind behind a Saenuri victory that few pollsters had predicated; as a result, Park comes to office with a legislative majority.

The election is being touted as historic, but some underlying electoral patterns show remarkable persistence, including regionalism and a significant age divide. As the two electoral maps below demonstrate, the political geography remains divided between the honam provinces of the southwest and the youngnam bloc with its epicenter in Taegu. Despite the fact that Moon comes from Busan, the largest city in youngnam, his strongest showing was in the heart of Cholla; as with Park around Taegu, he garnered over 90% of the ballots in some Cholla counties.

Seoul favored Moon over Park, but only narrowly (51.4% vs 48.2%); the outcome in the capital was not enough to swing the election to the left as it did in 2002. Park also defeated Moon in Chungcheong, which has become a swing region. Park's opposition to LMB's plan to reverse the Sejong City experiment paid off, while Moon's claim that Roh Moo Hyun should get credit for it did not get traction. 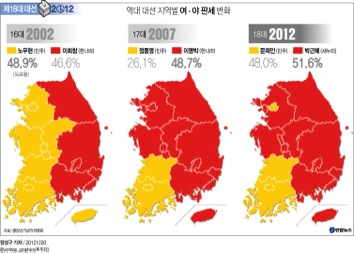 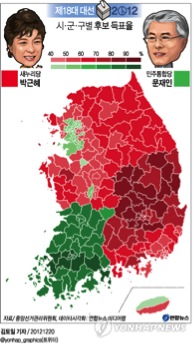 Much was made of the high turnout (over 75%), but a number of analysts both here and in Korea misread its implications. The standard expectation was that higher turnout favored Moon because it would reflect the mobilization of the younger voters who turned the tide for Roh Moo Hyun a decade ago. But South Korea is aging. Between the last two presidential elections, the proportion of the population who were in their 50’s or over 60 increased from 12.9% and 16.4% of the electorate in 2007, to 19.2% and 20.8% respectively in 2012 (YTN news report). Taking a somewhat longer view, the change is even more dramatic: the “5060s” generation constitute 40% of the South Korea electorate compared with under 30% in 2002 while the “2030s” have fallen from 48.3% of the electorate a decade ago to only 38.2% now.

Table 1 considers the demographics from exit polls. Park did enjoy a modest gender advantage, but it was hardly overwhelming. The action is in age and turnout by age. Not only did older voters support Park by wide margins, but they showed up at the polls. Hankyoreh points out that voter turnout was 65.2% for voters in their 20s and 72.5% for those in their 30s. But turnout among voters in their 50s was a remarkable 89.9%.

Now, the post-election introspection will begin on the left; we report some insights from our colleague You Jong-sung from Seoul. First, the election has to be seen as a defeat for the Roh Moo Hyun faction within the DUP. Sohn Hak-kyu obtained more votes than Moon among party members, but like Park in 2007 lost the nomination because of a similarly curious nomination process. Were Soh the nominee or if Ahn Cheol-soo stayed in, would the results have been different?

You argues that Moon's emphasis on economic democratization, attacks on Park as the daughter of a dictator, and awkward attempt to embrace Ahn's new politics did not work. The party will need a more forward-looking approach. Moreover, the left generated problems for Moon even though they did not formally split the opposition vote. United Progressive Party Lee Jung-hee's remark during the first TV debate that the sole purpose of her candidacy was to defeat Park, was followed by her actual withdrawal from the race in order to avoid a Ralph Nader outcome. That decision may have backfired by increasing turnout among conservative voters. Moon was also saddled with what were effectively running mates in two important elections that also agitated the right and probably bolstered Saenuri turnout: the race for Seoul's superintendent of education, where the DUP was represented by a former head of the teachers’ union and the Kyungnam gubernatorial elections, where former chair and presidential candidate of the Democratic Labor Party stood for the DUP.

We will post on prospects for North-South relations as things gel, but we will close by noting that what happens in key bilateral relationships will depend not only on Park’s intentions but what her counterparts do. The North has typically challenged the South following elections; in a broadcast from KEI in Washington, Victor Cha noted that they  have done so in every election—presidential or legislative—since 1987. If the Chinese were savvy, they would rethink the “even-handed” approach, for which they have paid a political price in the South. But recent bellicose statements from Xi Jingping on his Southern tour—which showcased the military over further economic reform--don’t have us holding our breath. And perhaps the most worrisome problem for the US—where pundits breathed an audible sigh of relief following the election—will be what the new Abe administration decides to do about Dokdo. Stay tuned.