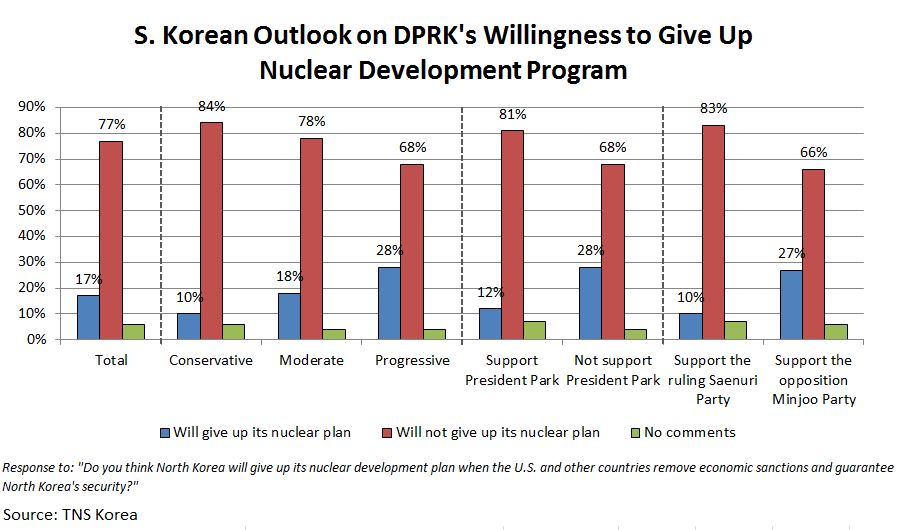 The North Korean nuclear program is back in the news with reports of the restart of the Yongbyon reactor. Last week, TNS polled South Koreans on their views of the North’s nuclear program. The results show a large majority believe there is little chance that the North will give up its nuclear effort (see above), and reveal little consensus as to the best way to try and halt it.

When asked if they thought that North Korea would be willing to abandon its nuclear program if the United States and other countries removed sanctions and provide security guarantees, only 17 percent replied affirmatively, while 77 percent averred. Even among self-identified progressives, more than two-thirds did not believe that North Korea would terminate its nuclear program, even with the removal of sanctions and the provision of security guarantees.

Against this backdrop of skepticism, respondents were asked about the best diplomatic tactics to persuade the North to give up its nuclear development plans. The Six Party Talks received a plurality of support, followed by inter-Korean talks, and US-North Korea talks.

US military action to end North Korea’s nuclear program was opposed by most respondents (56 percent opposing, 37 percent supporting), though the military option did receive majority support among those over 50 years old (51 percent), conservatives (50 percent), and supporters of the ruling Saenuri Party (51 percent).

Finally on the critical issue of sequencing, most respondents believed that North Korea should dismantle its nuclear program before receiving sanctions removal or security guarantees (60 percent v. 30 percent). And while attitudes over which should come first varied predictably by ideological and party affiliation, even progressives (50 percent v. 45 percent) and supporters of the opposition Minjoo Party (51 percent v. 47 percent) show majorities supporting nuclear dismantlement before the provision of concessions. The only group for which a majority of respondents believed that sanctions removal and security assurances should precede North Korean termination of its nuclear activities were those who identified themselves as political opponents of President Park (51 percent v. 45 percent).

In short, the South Korean public harbors deep doubts that North Korea will ever give up its nuclear development program. Among the diplomatic options, the Six Party Talks are favored, but most believe that North Korea must dismantle its nuclear program before benefits are provided.