A recent New York Times story  made reference to South Korea’s North Korean Refugees Foundation (NKRF); we were not familiar with it so we took a closer look. Established in 2010, NKRF was set up as one of the country’s many quasi-governmental foundations. The head of the foundation is appointed by the Ministry of Unification, with a board that includes deputy ministers of the MOU as well as the Ministry of Strategy and Finance, plus the chairs of the Korean Red Cross and the Committee for the Five Northern Korean Provinces. Funding is governmental.

The Foundation is designed to complement government policy, in this case the mandatory but ultimately limited three-month resettlement program through Hanawon. Dan Pinkston’s invaluable report from the International Crisis Group provides an introduction to South Korea’s changing resettlement efforts. The organization is based on the premise that financial support is not enough. Among the services rendered are consulting, medical check-ups, shelters for women and teenagers, childcare, employment training and educational support services.

This problem will continue to resonate. Despite some evidence of a pause in 2012, South Korea still took in over 2500 refugees in 2011. By one metric, this is only a trickle but as the Times points out, the problems of acculturation are not trivial. 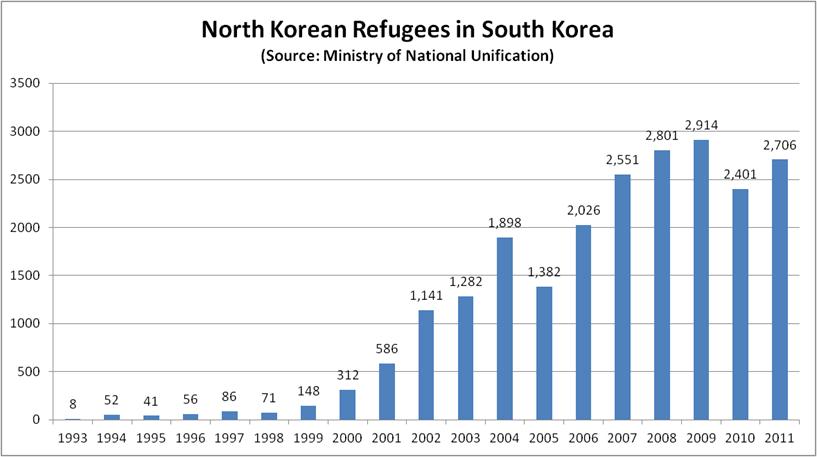 Another function of NKRF is research (no English webpage is available yet). The foundation has been commissioning surveys and initiating research projects that relate to settlement issues faced by North Koreans.

A final note; the foundation’s English name uses the word “refugee” (난민, or nanmin) but the Korean name uses “defectors” or bukhan-ital-chumin (북한이탈주민). The origins of this term are bukhan (North Korea) + ital (desertion, defection) + chumin (residents). (See for example the South Korean Protection and Settlement Support for North Korean Defectors Act (in Korean). We have reflected on this terminological issue before. The core issue is the reluctance to refer to fellow citizens as “refugees,” despite the fact they fit the definition by any measure we can see.