Earlier this week we looked at the impeachment resolution against Park, her response, and developments on the Constitutional Court, which ultimately decides if Park’s impeachment will stand. Today, we look at developments in the political arena in the last month, particularly the re-shuffling of the Saenuri Party.

At the end of December, twenty-nine Saenuri Party members left the party to create a new party now called the “Bareun Jeong” Party (바른정당) or “Righteous Party” (In Korean the party name is a play on words as “jeong” could mean righteous, clean, or warm). Indeed, the new Righteous Party, in a clear attempt to differentiate itself from Park Geun-hye, pronounced that they would pursue a “clean and warm conservatism.” The party’s stated aim is to “protect liberal democracy, uphold the principle of market economics, and realize integration and a caring community.” The platform calls for broadening the scope of information the government must disclose, and transferring key oversight authorities from the Board of Audit and Inspection, controlled by the executive branch, to the National Assembly. On the social front, they wish to restrict the construction of additional nuclear power plants and reduce workplace discrimination against temporary workers.

On inter-Korean relations, the Righteous Party pledges to respect previous agreements made with the North including the summit declarations in 2000 and 2007. But they also vow to deal sternly with the North’s nuclear and missile provocations and continue to raise human rights issues with Pyongyang. Notable defectors to the Righteous Party include Kim Moo-sung, former head of Saenuri, Gyeonggi Governor Nam Kyung-pil, Jeju Governor Won Hee-ryong, and former Seoul Mayor Oh Se-hoon.

Saenuri saw the largest number of defections from the Seoul Metro area which has historically been less conservative and less supportive of Park: 41% of its members defected to the Righteous Party. In the Gyeongsang region, historically more conservative and pro-Park, Saenuri lost half as many of its members (21%) to the Righteous Party. (The proportionally elected candidates are tied to the party ticket so cannot cross the aisle unless there is a multi-party merger, dissolution, or expulsion; however, some of those politicians probably would have bolted as well.) With its current numbers the Righteous Party would primarily be a National Assembly coalition partner but hardly a national political force. The table below provides a province-by-province line-up. 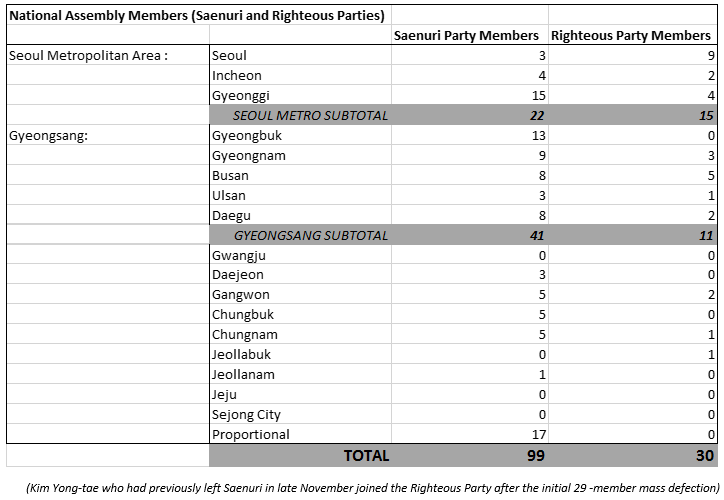 Whether the Righteous Party can take the presidency will depend on finding a compelling candidate. Kim Moo-sung, former Saenuri chairman, leader of the anti-Park faction and now Righteous Party member, has insisted that he will not seek the presidency. The most likely prospect, Yoo Seung-min—who represents a district in Daegu—said he would give a final answer on whether he will pursue the presidency in late January. Before Yoo entered elected office, he was a professor and researcher; he received his PhD in economics at the University of Wisconsin-Madison. However, in a recent Real Meter potential presidential candidates poll where the top contender from each party as well as Ban Ki-moon were included, Yoo garnered just 5% support.

As a result of this candidate problem, the Righteous Party has made overtures to bring Ban Ki-moon into the party, whose center-right philosophy ostensibly aligns with their own. Ban has not yet officially declared he will run but pretty clearly insinuated as such. When he arrives back in Korea this week he is scheduled to tour the countryside to connect with the general populace, underscore his folksy demeanor, and to even take public transportation. But Ban now faces a new embarrassment: his brother and nephew were indicted on charges of bribery in New York on Tuesday.

The reconfigured right—whether Saenuri or the new Righteous splinter, appears to face long odds given Park’s malfeasance and the decline in trust. When breaking down support by party (below), the Minjoo Party is by far the most dominant. In the most recent Real Meter poll from the first week of January, potential overall support for Minjoo is at 38%, the Righteous Party at 13%, and Saenuri at just 12%. 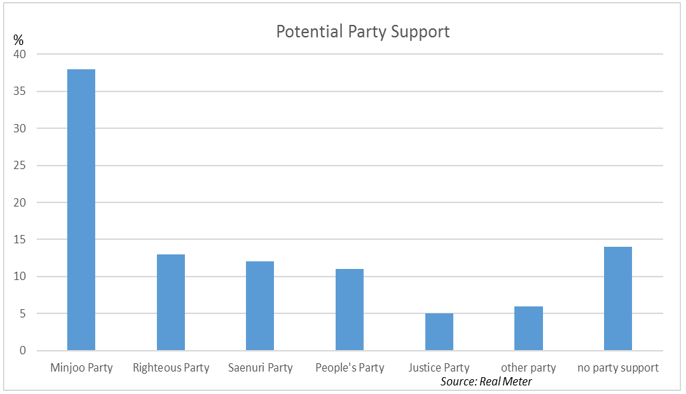 However, Korea is a presidential system and candidate-specific presidential polls (below) tell a very different story. Moon Jae-in is only ahead of Ban Ki-moon by a margin of 27% to 22%. Given that this will come down to a two-man race, this has to be treated as safely within the margin of error. The Righteous Party would certainly gain in prominence if Ban joined and distancing himself from the Saenuri might suit Ban’s political ambitions; to date, he remains unaffiliated.

Meanwhile, there is still a bitter pro-Park/anti-Park division within the downsized Saenuri. Saenuri’s anti-Park interim leader In Myung-jin last week called on pro-Park loyalists to leave the party, saying he is determined to exit the party himself if the pro-Park figures do not. The decision Saenuri members face is whether to stay in a divided party with very low approval ratings or jump ship to somewhere else. Since twenty-nine of its members broke off from Saenuri on December 27, there haven’t been any more defections but if anti-Park Saenuri members see no political future within Saenuri, the Righteous Party may pick up steam. On the other hand, a strong presidential candidate—like Ban—could quickly keep wavering Saenuri members on board.

The timeline for presidential elections is crucial and still unclear. At the fast pace the Constitutional Court impeachment review process is proceeding, a ruling could come by the end of January but as late as March; in theory, it could certainly extend beyond that. If Park’s impeachment is upheld the elections will be held sixty days thereafter. When this sixty-day clock starts ticking may prove an important factor for whether Ban Ki-moon has enough time to connect with voters and establish himself in domestic politics. Assuming he isn’t derailed by his brother’s shenanigans, more time is better than less. 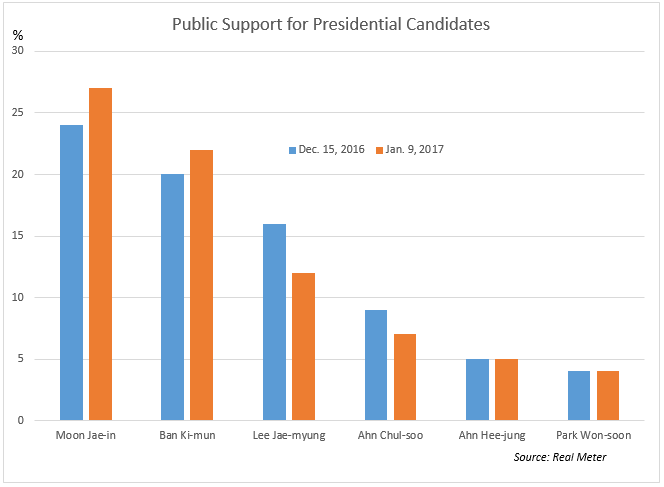 Previous posts on the Park-Choi scandal: