On March 10th, Korea’s Constitutional Court unanimously upheld the National Assembly’s impeachment of Park Geun-hye, which had passed with 234 “yes” votes, 56 “nays” and, 9 abstentions and null votes. The verdict was rendered more powerful by the fact that all 8 judges voted in favor of upholding impeachment. But it was made even more powerful still by the fact that so many of the judges—5 out of 8—had either been nominated by the Saenuri Party, appointed by Park’s Attorney General or by Park herself. It is hard to call this a hatchet job. (Past posts on the scandal are linked below, and provide a history of Park’s ouster).

The court was nonetheless cautious. It held that charges related to Park's abuse of power to appoint and dismiss officials, failure to protect people's right to life during the Sewol ferry tragedy, and infringement of the freedom of press by forcing a newspaper company CEO to step down all fell short of meeting requirements for impeachment. They did so not only because evidence was thin but also because incompetence—particularly in the handling of the Sewol ferry disaster—does not constitute grounds for impeachment. The court was also silent on the particular quid-pro-quos that might have happened between Park, her appointees and the chaebols. That issue is likely to resurface as we will see.

However, the court was unforgiving with respect to Park's relationship with Choi Soon-sil and the resulting abuse of executive powers: through the foundations controlled by Choi; through Choi’s interference in government affairs, especially with regards to cultural and sports projects; and in the sharing of classified materials. Moreover, the fact that Park did not cooperate with the investigation, hid her relationship with Choi, and denied allegations of Choi's role did not go down well. One supplementary opinion—and from arguably the most conservative judge—stated that the impeachment was not a matter of conservative or liberal values but about the integrity of the constitution and the necessity of rooting out the political abuses revolving around Park. Below, we provide more detail on the findings on each of the charges.

When the decision broke, CNN was providing breathy coverage of the demonstrations against the verdict. But this coverage was a perfect example of not understanding the setting. These rearguard actions were tiny compared to the massive demonstrations that contributed to Park’s ouster. Two pieces of evidence make the case. The first graph below charts the movements of the KOSPI over the course of the day. Around 11:15, the judges’ recitation of their findings stalled out over charges for which they found inadequate evidence. The markets dipped briefly before rebounding with the final conclusions.

But the larger story comes in a well-done report by the Asan Institute. Two graphs show the story. A common line is that there is a huge generational divide and older voters support Park. Relatively speaking that is true, but there is not a single age group in which opposition to the impeachment outweighed support for it. Another line is that Korean politics is regionalized. To be sure, but there is also not a single one of the major super-regions where opposition to impeachment outweighed sentiment that she should go, including Daegu. 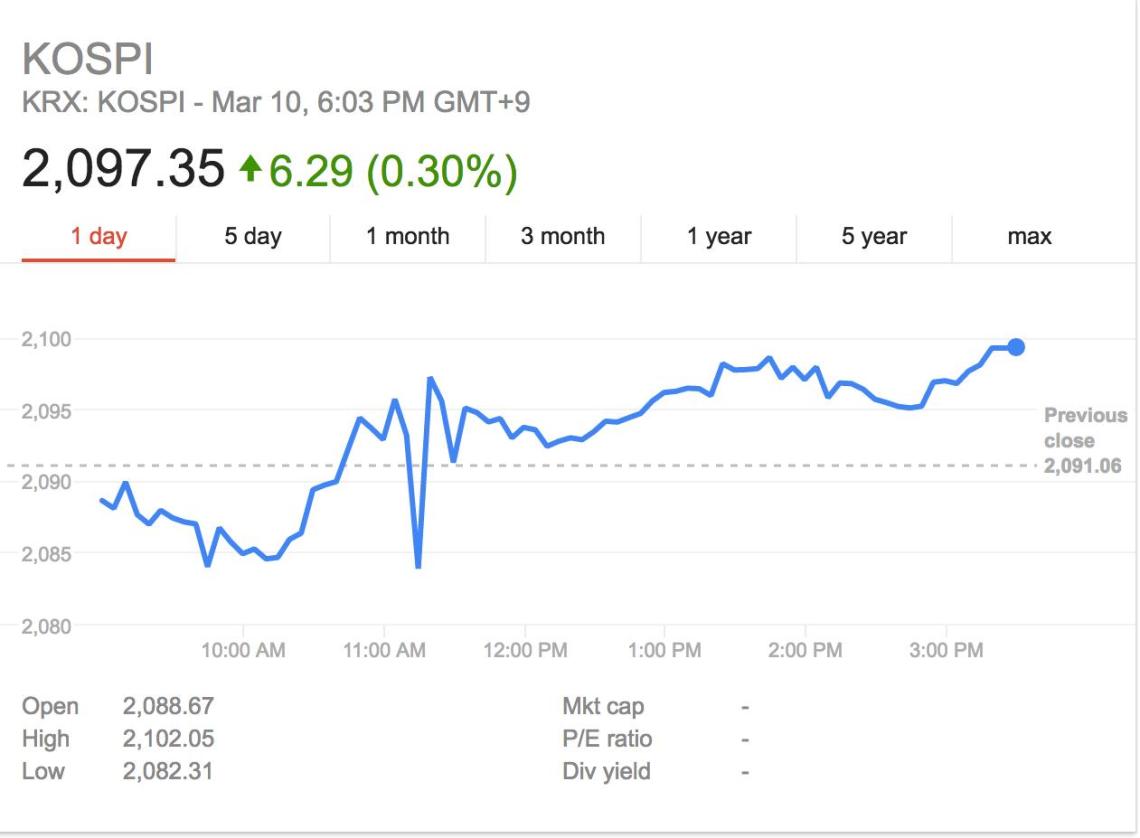 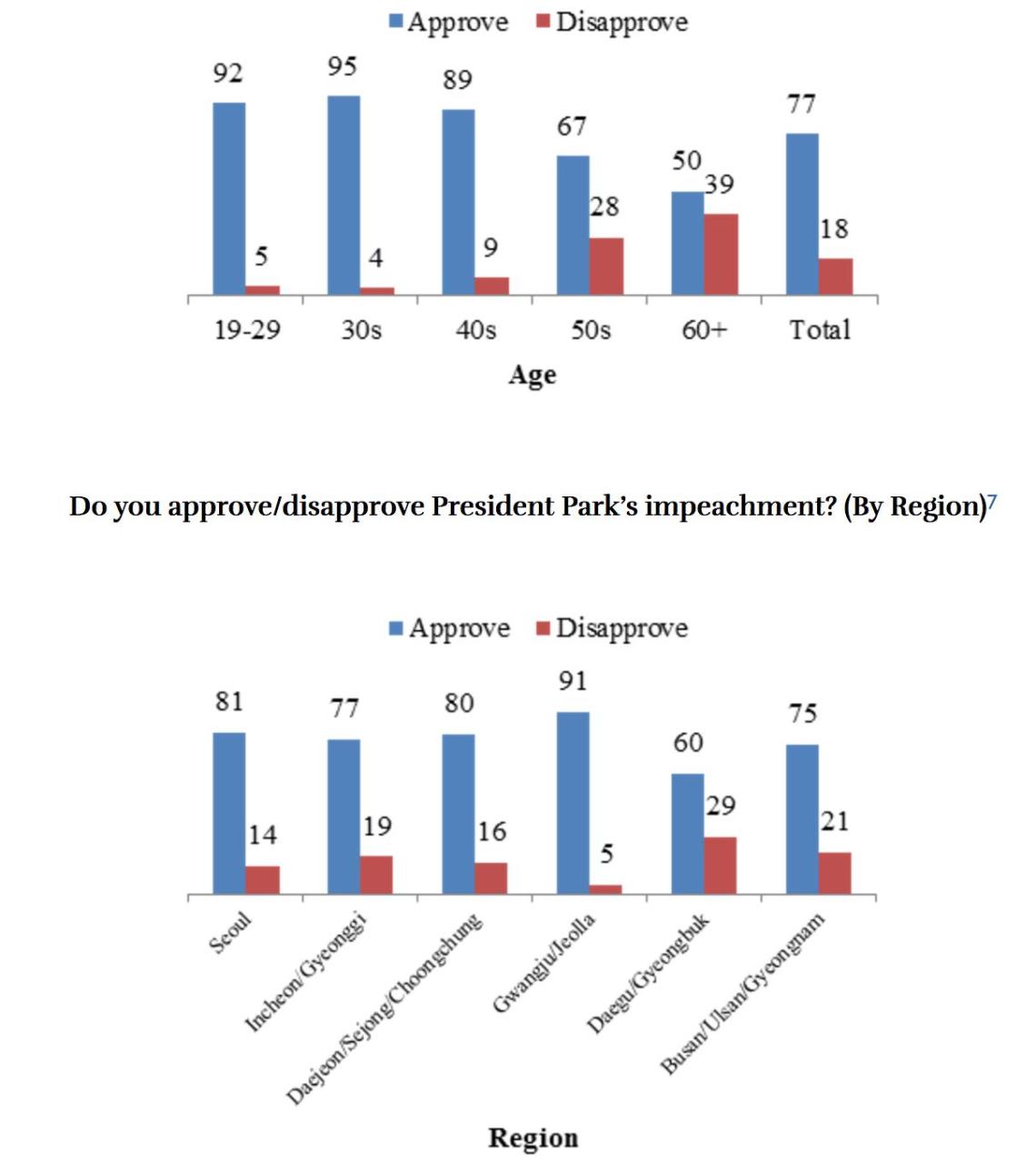 The final question is Park’s liability as a civilian. Section 1, Article 54 (Effect of Decision) of the Constitutional Court Act is pretty clear on the subject: "The decision of impeachment shall not exempt the respondent from civil or criminal liability." The court did not address the many possible bribery or extortion possibilities that arose out of the funding of the foundations. Unless she receives a pardon from the incoming administration, those cases are likely to continue into the future as well, potentially implicating not only Park but the contributing firms. The Samsung saga is only the first in the queue.

Next stop: the elections.

Link to the Full Text of the Order (in Korean, .pdf)

Judges on the Constitutional Court

The Court’s Findings on the Particular Charges

On the abuse of authority in the appointment of civil servants:
Lack of evidence

The court confirmed that a Director and a Manager at the Ministry of Culture, Sports and Tourism were demoted and one was eventually forced to retire at Park’s direction. Minister of Culture Yoo Jin-ryong was also sacked, and six director-general level public officials were also forced to hand in their resignations by the First Vice Minister of Culture under instructions from the Chief of Staff to the President Kim Ki-choon. Three out of these six eventually resigned. However, the court concluded that the evidence of Park’s role in these personnel decisions was inadequately clear to uphold the charge.

On the infringement of media freedom:
Lack of evidence

The court confirmed that the Segye Ilbo reported on the so-called Chung Yun-hoi document compiled by the Office of the Presidential Secretary for Civil Affairs. President Park condemned the leaking of an internal document from the Blue House as a disturbance of national order and demanded that the Prosecutors’ Office conduct a thorough investigation to reveal the truth behind the disclosure; these actions were seen as an abuse of power vis-à-vis the press since the Chairman of the paper was effectively forced to resign, hounded out of office. However, the court concluded that it was unclear who actually pressured Segye Ilbo and there is no evidence to establish that President Park was directly involved.

On the violation of the duty to protect the right to life and the duty of fidelity:
Lack of evidence

When the Sewol ferry sank in April 2014, with 304 deaths, President Park remained in the Presidential residence. The opposition charged that the President had the duty to exercise the authority and responsibilities of her office to ensure that the state protects the lives and safety of the public. However, the court concluded that the President did not have a specific duty to personally participate in the response to the disaster in any particular way.

The opposition also charged that the President had the duty to perform the responsibilities of her office with “fidelity,” as called for in the Constitution. However, the court found the concept of fidelity to be abstract and relative, making it difficult to consider her behavior as impeachable on those grounds. Although the Sewol Ferry incident was a tragedy, the court concluded that policy failures and incompetence were not grounds for impeachment.

On allowing Choi Soon-sil to interfere with national affairs and on abuse of authority:
Upheld

This cluster of charges constituted the main indictment against Park and the court upheld them, although with silence noted on possible bribery or extortion.

Most of the documents reported to President Park were handled by the Personal Secretary to the President, Jung Ho-seong. Between January 2013 and April 2016, Jung relayed documents containing official state secrets to Choi Soon-sil, which included information on various personnel appointments, cabinet meetings, the President’s overseas itineraries, and meeting notes with the US Secretary of State. Choi intervened in the president’s responsibilities by reviewing these documents, voicing her opinion on various matters, and modifying the content of some documents, including the President’s itineraries. Moreover, Choi Soon-sil made recommendations with respect to personnel appointments from which she subsequently benefited.

The Court upheld a number of specific charges related to corruption and abuse of office; although they were in the bill of impeachment that we reviewed earlier, they are worth recounting for what they show about how official corruption worked. They center on President Park’s participation in the establishment of MIR and K-Sports foundations and the support they subsequently provided to Choi Soon-sil’s firms Playground, The Blue-K, and KD Corporation.

The Constitutional Court took particular umbrage not only at the crimes but the effort by the president to deny and conceal them; thus the periodic Watergate reference. The language of the ruling made repeated reference to basic principles of democratic rule, for example citing the fact that her actions made it difficult for the National Assembly to provide checks and balances or the media to perform its monitoring role. Despite her stated willingness to cooperate with the prosecutors, in fact she did not respond to requests for information from the Prosecutors’ Office and the Special Prosecutor, and denied searches of the Blue House. The final portion of the ruling deserves a rough translation:

To me, this ruling represents democracy at work.

Previous posts on the Park-Choi scandal