In this third post, we consider the political state of play, again acknowledging that the situation is highly fluid and subject to change. There are essentially three possible scenarios, each with variants: she stays in office by promising to share power with a new Prime Minister; she resigns, leading to an election; or impeachment proceedings are initiated by the National Assembly, which could be played out to their end or could result in her resignation. It may seem obvious that the opposition and even anti-Park factions within her own party would seek her resignation. But such demands have come more slowly in part because of lack of clarity about who benefits from the different political options.

Before looking at these options, it is important to underscore that the debate plays out against a backdrop of extraordinary political disaffection. Overall polls come out roughly weekly and there was a small bounce in one of the two major polls (RealMeter) that suggested that the second apology had garnered sympathy. But in fact the Gallup poll showed that her fall to a mere 5% approval rating persisted. Moreover, even her staunch base of regional support in the TK (Taegu-Kyeongbuk) was damaged by the perception she had failed to come through on a promised airport and a complex NIMBY response to her decision to deploy the THAAD battery at Sungjoo in Kyeongbuk Province (and on a Lotte golf course to boot).

I spent five hours walking the demonstrations on Saturday and they were truly massive. The police and supporters were both playing the expectations and numbers game by under-estimating and overestimating respectively (200,000 or 1 million?). But at its peak virtually the entire length of Sejong-daero—the 1.2 km from the Plaza Hotel to the Palace gate at Gwanghwamun—was packed with mostly sitting demonstrators listening to speeches and entertainment from well-organized stages and big screens. But this was in addition to  significant numbers moving slowly along the sidewalks and occupying the cross streets, including Sejong-ro and coming in from as far away as Seoul Station.

The president has clearly seen that the path to staying in office is to shed those around her and to attempt to share power in some way. As we noted in an earlier post, her first response to the crisis was to fire her chief of staff and seven additional aides. But the centerpiece of the power-sharing strategy is the Prime Ministership. Korea nominally has a semi-presidential system, with a Prime Minister that is supposed to have the ability to recommend ministers but is generally a distinct second in command. Could she negotiate a replacement Prime Minister and credibly give that Prime Minister adequate power to save her position?

At the time the crisis broke, the sitting Prime Minister was Hwang Kyo-ahn. When notified that he would be fired—apparently by text message—he initially planned to do so immediately. But if an alternative were not approved there would be no Prime Minister and so he canceled the resignation ceremony. Park initially chose Kim Byung-jun to replace him, a professor of public administration who had worked under the Roh Moo-hyun administration as Minister of Education and Vice Prime Minister and ultimately became his chief secretary. Later, however, she went to the National Assembly without prior coordination and effectively withdrew this nomination saying that she would accept a nomination coming from the National Assembly (more precisely, “if the National Assembly recommends a suitable candidate based on consent between the ruling and opposition parties, I will appoint him as the prime minister and have him lead the cabinet”).

The Minjoo refused to discuss this option initially believing it would shift the political discussion away from Park’s transgressions onto the issue of the Prime Minister. They also no doubt had questions about whether Park could credibly commit to granting the Prime Minister power, given the fact that she remains the President and Commander in Chief and given the history of a strong-president system.

There are several clauses in the constitution that are worth quoting in full, because they are the subject of substantial legal debate in Korea. Article 68, 2 states. “In case a vacancy occurs in the office of the President or the President-elect dies, or is disqualified by a court ruling or for any other reason, a successor shall be elected within sixty days.” This is the rule that is assumed to govern her outright resignation, taken up below. But Article 71 states that “If the office of the presidency is vacant or the President is unable to perform his duties for any reason, the Prime Minister or the members of the State Council in the order of priority as determined by Act shall act for him.” Article 26 then defines this order. But according to contacts in Seoul, at least some legal scholars believe that this could provide the basis for the PM effectively becoming something like an Acting President.

If the president resigns, an election needs to be held within the next 60 days in accordance with Article 68 of the Constitution just noted. So far, there have been three presidents who resigned in the middle of their terms: Lee Syngman (1960), Yun Posun (1962), and Choi Kyu-Hah (1980). Lee resigned due to mass protest after election fraud, while the other two were forced to resign by the military.

But the main feature of this provision is that the newly elected president serves not for the reminder of the resigned president’s term, but starts a new five-year term. This of course throws the entire political class into speculation about who is best positioned to win now, with those anticipating an improved position by December 2017 implicitly favoring delay. (For a while, there was an additional constitutional issue of whether those who currently hold office could run at all, given that they were supposed to have resigned from office a full 90 days prior to the election; that was subsequently cleared up by a ruling that stipulated that they could in fact run if they had resigned 30 days prior to the election).

The potential field is extraordinarily crowded with one set of polls—included below—tracking no fewer than 15 candidates. But here we focus first on the top five. The clear beneficiaries seem to be those on the left, i.e. Moon Jae-in and Lee Jae-myung. The clear loser, at least so far, seems to be Ban Ki-moon, who has been considered as a candidate for the right and speculated to be Saenuri’s favorite among the more competitive candidates on the right.

As a party, the Saenuri was initially cautious but appears to be turning. On November 1, core members of the non-Park faction in the Saenuri, including its potential presidential candidates such as Kim Moo-sung, Nam Kyung-pil, Won Hee-ryung, Oh Se-hoon, and Kim Moon-soo, publicly asked for the resignation of the current Saenuri leadership, who are mostly pro-Park (here). Kim Moo-sung and Oh Se-hun even went further and asked President Park to abandon her party membership (here). Kim Moo-sung, former Saenuri chairman, changed his tune and argued on Sunday that the president should be impeached. In addition, 80 lawmakers and senior members of the ruling Saenuri Party issued a joint statement Sunday and vowed to disband the party in an apologetic move to the general public, adding they will establish a so-called “emergency situation committee” to push the move forward. 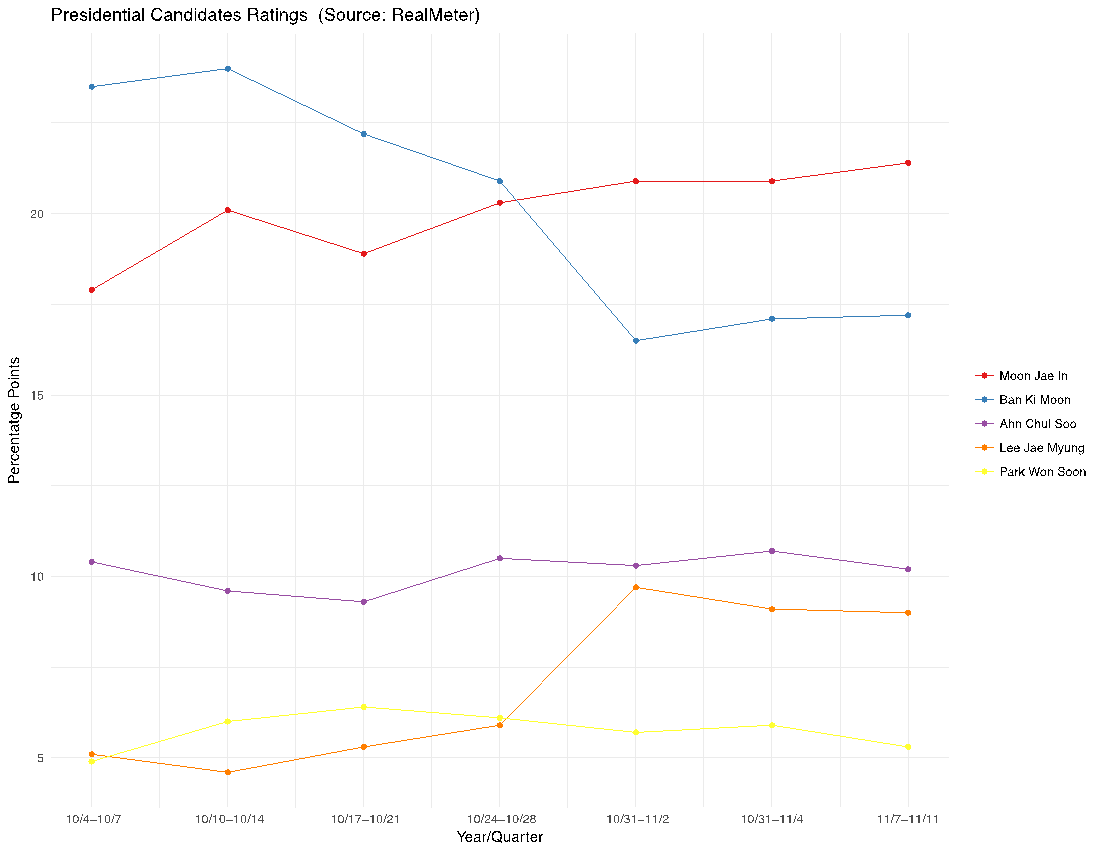 (For reporting see here and here).

Impeachment is the ultimate trump card that the National Assembly holds, but it has the effect of paralyzing the government and introducing uncertainties given the prolonged nature of the process. In addition, the votes have to be there. Article 65 of the Constitution—reproduced in full below—allows for a vote of impeachment against a range of public officials if they have violated the Constitution or other laws, and as we have suggested there is certainly prima facie evidence that Park has. But while a third of the National Assembly can propose impeachment, it takes half to pass the proposal and two-thirds to actually impeach.

The number of current National Assembly members is 300. A majority motion thus requires 151 members, and passage at least 200 yay votes. Pro-opposition votes are usually estimated around 170, and the Saenuri has 129 seats, initially making passage highly unlikely. But as suggested by looking at some of the contenders and anti-Park faction members coming forward, the tide could be turning.

But it is more likely that if the National Assembly turns—and demonstrations of this magnitude persist—she will be forced first to a face-saving power-sharing agreement and if that fails to resignation. Stay tuned.

The Contenders: The Also-Rans

The following figure provides more detail on the full range of candidates who are being tracked.

Article 65 of the Constitution on Impeachment

(4)A decision on impeachment shall not extend further than removal from public office: Provided, That it shall not exempt the person impeached from civil or criminal liability.