In a recent post, we summarized the current news on the food situation in North Korea, now we're intrigued by a recent piece in the MK Business News that notes that South Korea's rice output has declined to its lowest total in ten years (projected at 4.26 million tons). The figure strikes us because it was surprisingly similar to North Korea's total output of cereal grains.

So we did some simple calculations using available FAO and USDA FAS data to see if we could say anything about yields and productivity in the two countries.  First we took total output of rice and simply divided by arable land.  Then we tried some other measures including estimated yield per hectare as well as the estimated seed totals for rice planted each year.

The results are plotted below.  We would be among the first to caution that calculations such as these, based on data of questionable validity, should be taken with a grain of salt. But as will be seen, the differences in agricultural productivity between the two countries are not small. 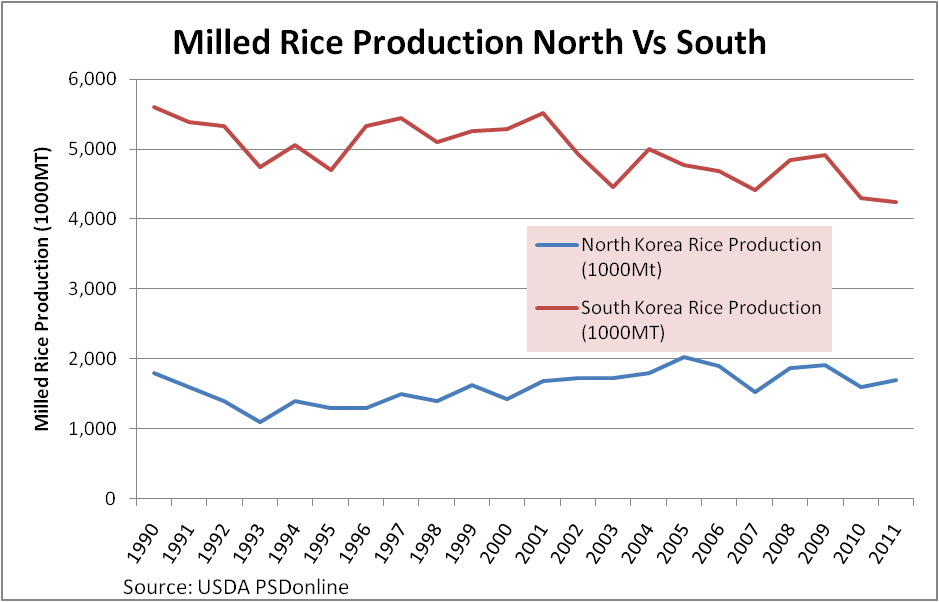 South Korea, even at its current low point in rice production, far outproduces North Korea.  But what about milled rice production per hectare of arable land?  Between 1990 and 2011, South Korea trounces the North with nearly five times the output/arable land.

The next figure plots arable land over time and give some insight into a potential culprit in declining output for the South Koreans.  While estimated arable land for North Korea has apparently expanded by roughly 400,000 hectares over the time period, the South has lost about 400,000.  South Korea has had to do more with an increasingly smaller arable land endowment. 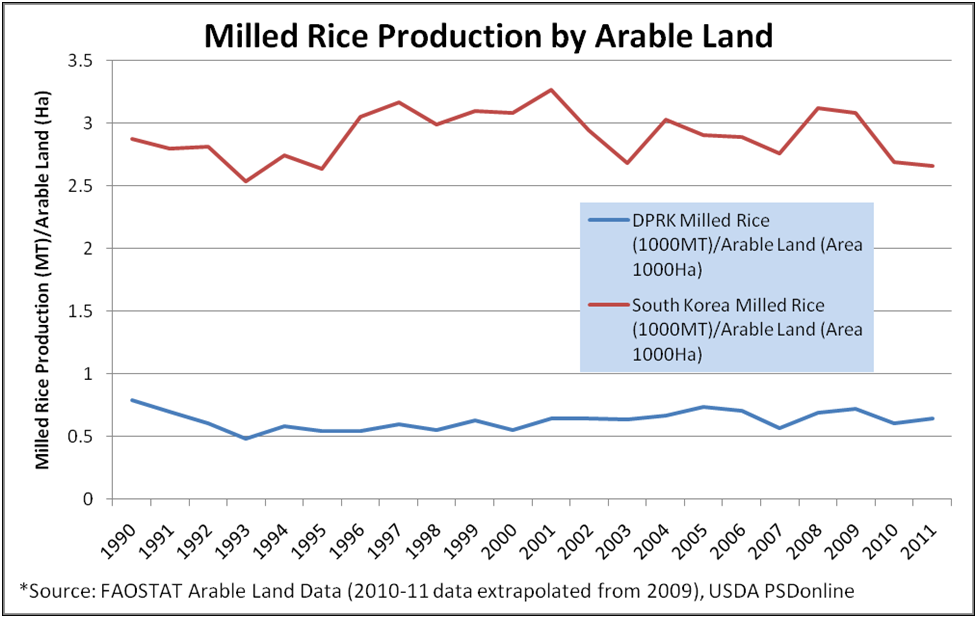 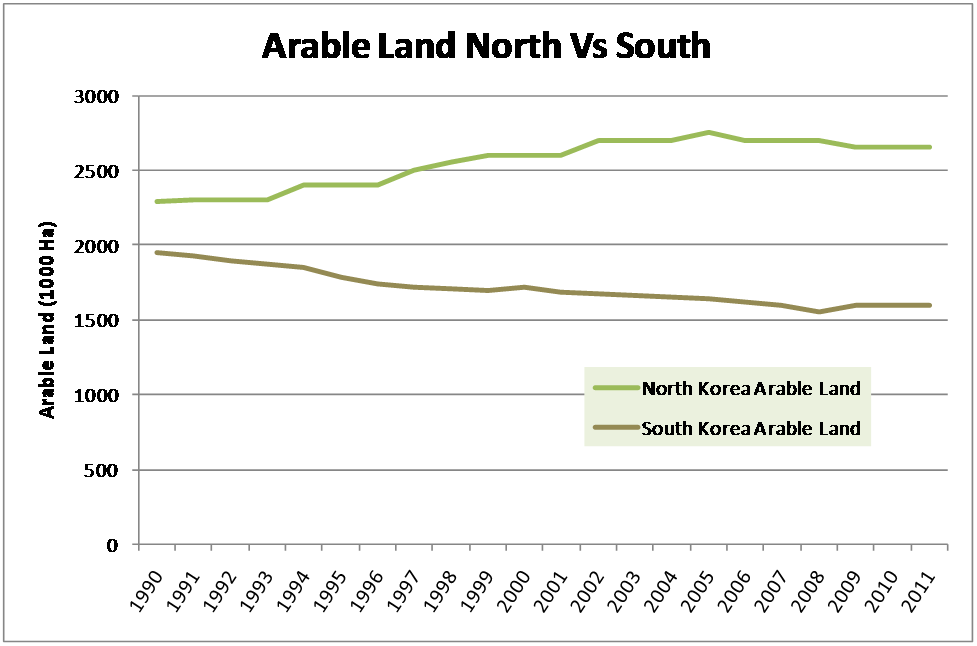 One argument in North Korea’s defense is that it appears to plant a more diverse basket of grains and may simply be using its arable land for other crops.  The third figure measures rice yields per hectare planted to rice over the same time period.  The gap in productivity narrows substantially to 3:2. 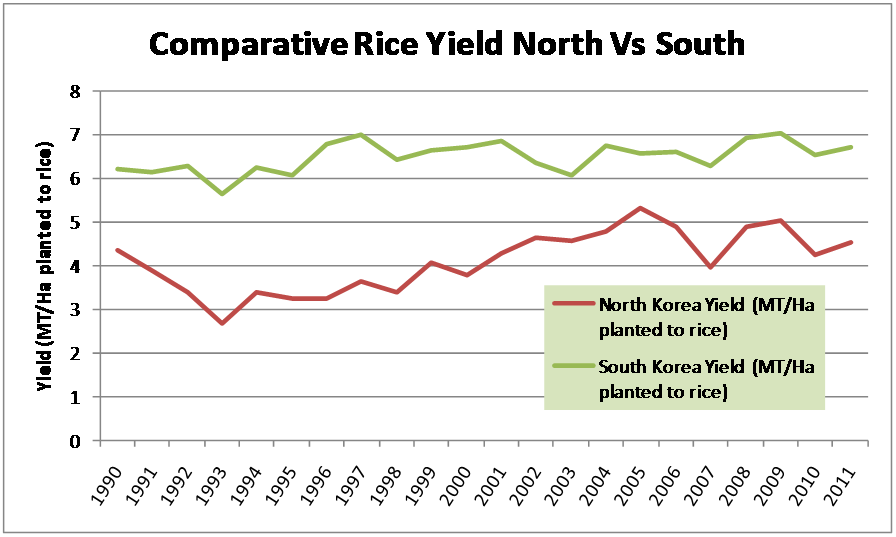 Next we looked at estimated seed totals for rice between the two countries and another picture emerges.  Even though total rice output for the North is far lower than in the South, the amount of seed planted to rice is very similar.  Based on the yield estimates above, it appears that the North Koreans are planting far more seed per hectare of land than the South Koreans and seemingly getting little to nothing in return.  The final figure looks at productivity relative to seed totals by taking total rice output and dividing by tons of seed planted each year.  In this case, we seem to find something closer to a 2:1 ratio of productivity between the two countries. 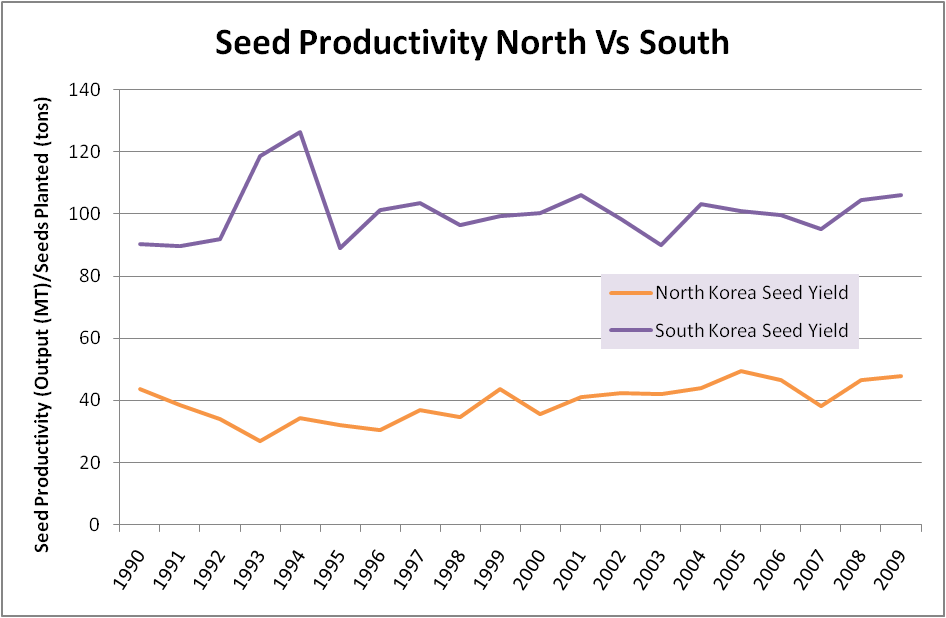 Obviously, the greater access to capital and technology is of great benefit to South Korea, but the North surely has far more laborers working in agriculture. Subsidies and protection may play a role in the South and it may be that the little difference in latitude is enough to expose North Korea to more weather-related shocks. . But we are inclined to suspect that incentives are no small part of the story. Agriculture is never going to lead the transformation of the North Korean economy, but both the country and rural households could see much higher yields by rolling back the collectives and providing more incentives to farmers.

STTB: I Need Another Line of Work Edition