The Iran Deal: The Implementation Plan

It is beyond the scope of this blog to review the entirety of the Iran deal, which runs to about 160 pages; my views on the substance do not depart from my assessment of the interim agreement reached in April. But two important components deserve attention as they are relevant to any North Korean deal, should one ever be on the table again: the sequencing of commitments; and dispute resolution, including the question of snapback of sanctions for noncompliance.

The timing of concessions has been a central sticking point in the negotiations all along, and this sequence is outlined in Annex V of the agreement (pp. 151 ff.). We summarize our understanding of it here in tabular form. As we have noted—for example in our monograph for the East-West Center on the negotiations with North Korea—such agreements hinge on deep-seated credibility problems: that neither side is convinced the other will come through and thus incremental steps need to be taken to provide mutual assurances of compliance. Your view of sequencing will depend on your view of the underlying commitments. But it is worth noting that the agreement does not really come into full force—on so-called Implementation Day—until the IAEA has verified that Iran is in compliance with virtually all of its commitments under the Agreement. The charge that Iran gets sanctions relief early in the agreement is true, but “early in the agreement” still requires that Iran implement the substantive features of the agreement upfront, verified by the IAEA.

With respect to the duration of the agreement, much is made of the fact that some commitments are for ten years and many of most significance—such as limits on reprocessing—are “only” for 15. Others run to 25 years. Critics say that the agreement should have been for 20 years…or eternity. But it is impossible to see where Iran will be in 15 years. As the Agreed Framework with North Korea showed, it is better to have some restraints than throw over an agreement entirely and be left with nothing. 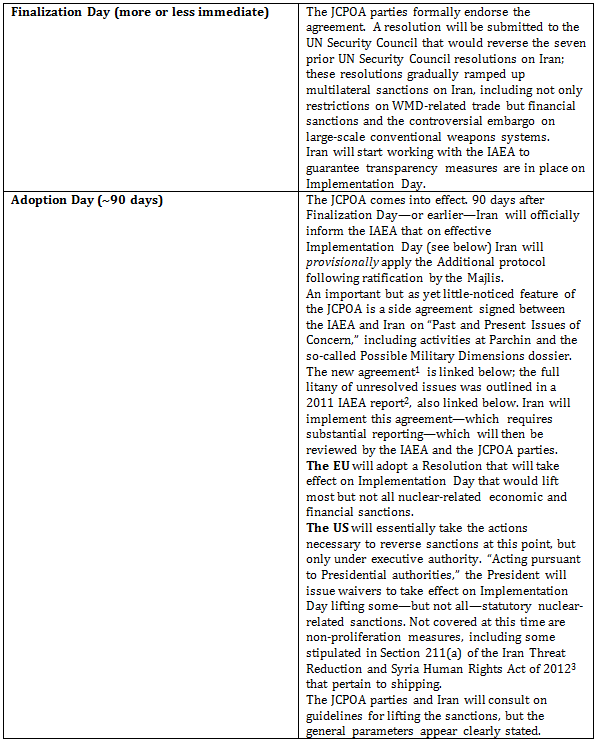 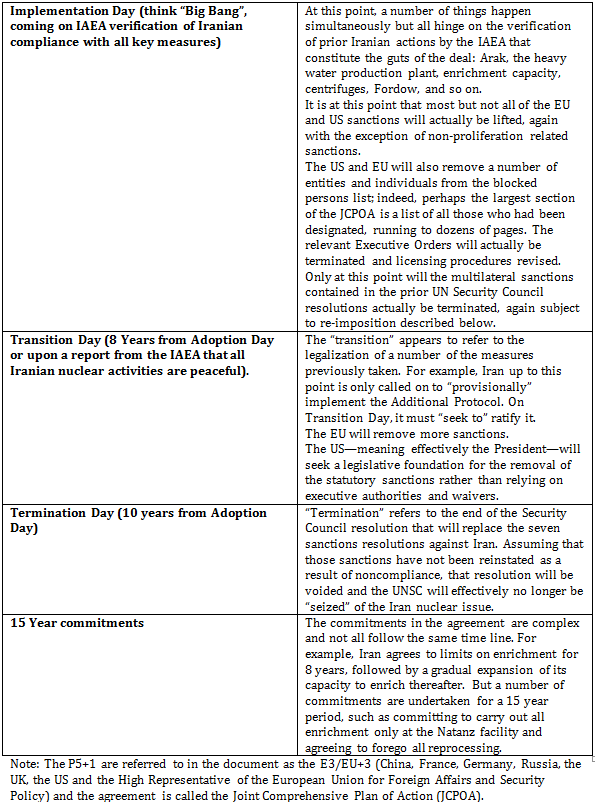 A second major issue is dispute settlement, which is outlined in a few very dense paragraphs (pp. 19 ff.). Dispute settlement was closely related to the debate among the P5+1 on “snapback” provisions: the conditions under which sanctions would be re-imposed. A crucial issue was whether a decision would have to pass through subsequent UN Security Council votes that could fragment the P5+1 coalition (Reuters has a good summary of the debate as of June 1).

Again, a summary table outlines the steps in the agreement, which are complex. The agreement clearly allows the United States to unilaterally re-impose sanctions if it deems Iran in substantial material breach, but only after going through a process in which the complaint would be vetted by the other parties and a board.  There is always risk of salami tactics: that Iran will calculate the level of non-compliance that would split the P5+1 coalition. But much will depend on both monitoring and deft American diplomacy. The US and the other parties cannot allow “small” derogations to accumulate. The agreement allows for what is effectively an appeals process all the way up to the Security Council, where in principle snapback could be automatic. However, it is hard to envision any circumstance under which such automaticity would actually kick in; the parties are almost certain to disagree. Again, monitoring and diplomacy will matter in keeping the parties focused on the terms of the deal.

But more important still is the ever-present question of “compared to what?” The US could have walked away from the negotiations as critics both in the United States and Israel argued. But such a step would have clearly fragmented the fragile P5+1 coalition even earlier, in addition to Iran walking away. What then? I have seen surprisingly few answers to this simple question: Peter Beinert gets it right at the Atlantic. Critics don’t like the fact that the US cannot unilaterally get Iran to do what it wants. Welcome to the real world. 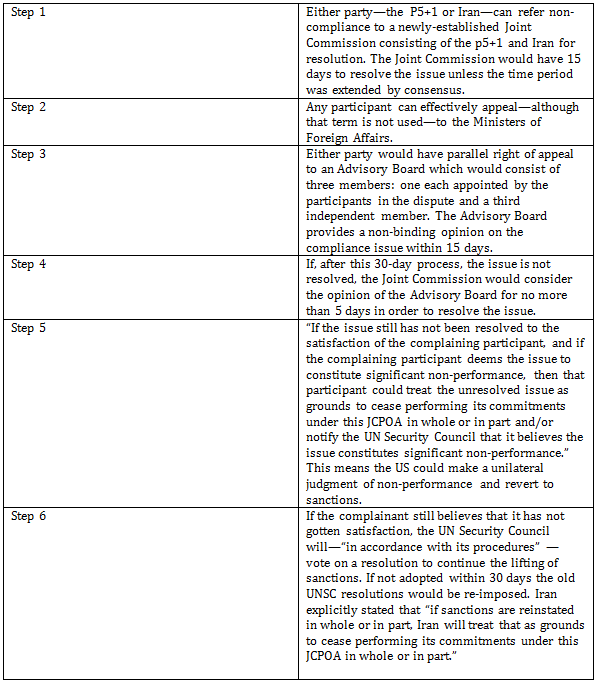