In December of last year, we posted on a scathing Amnesty International report on the South Korean National Security Law. We followed up with a second post on the fact that AI was not alone. During the Lee Myung Bak administration, a number of international institutions and NGOs had weighed in on declining freedom of expression in South Korea, from Freedom House and the Open Net Initiative to a UN Special Rapporteur on the promotion and protection of the right to freedom of opinion and expression. With my colleague Jong-sung You, we have now produced a longer paper on the topic (available in .pdf as paper 144 on the website of the World Congress for Korean Politics and Society). Last Wednesday we had the pleasure of addressing a group of 30 members of the National Assembly on the issue; the response was lively.

In addition to the NSL and the role of national security restraints on free speech, we identify four other areas where South Korea is lagging democratic norms: defamation; restrictive campaign laws; internet freedom; and state control over the media through ownership of public broadcasting. Here, we focus on the first two of these as they are closely related.

In recent years, the use of criminal defamation to control speech has become an issue of increasing international concern (ARTICLE 19 has a good concise brief on the issue). Criminal defamation laws are often written to protect the relatively ill-defined “feelings” or honor of the plaintiff—including government officials--or even to protect plaintiffs from statements that are factually correct but “insulting.” International legal scrutiny has focused particular attention on process: the way in which criminal defamation, libel and slander laws can be used to harass oppositions and activists. The convicted are not only saddled with lengthy and costly investigations and trials but a criminal record, fines and even imprisonment. For these reasons, the United Nations Commission on Human Rights ruled in 2012 that the criminalization of libel violates freedom of expression and is inconsistent with Article 19 of the International Covenant on Civil and Political Rights.

The figure below shows that in the first decade following the democratic transition in 1987, the number of indictments for defamation held roughly constant, but then began to turn up during the Kim Dae Jung and Roh Moo Hyun presidencies. Indictments then more than doubled between 2007, the last year of the Roh Moo-hyun administration, and 2011, the fourth year of the Lee Myung-bak administration. 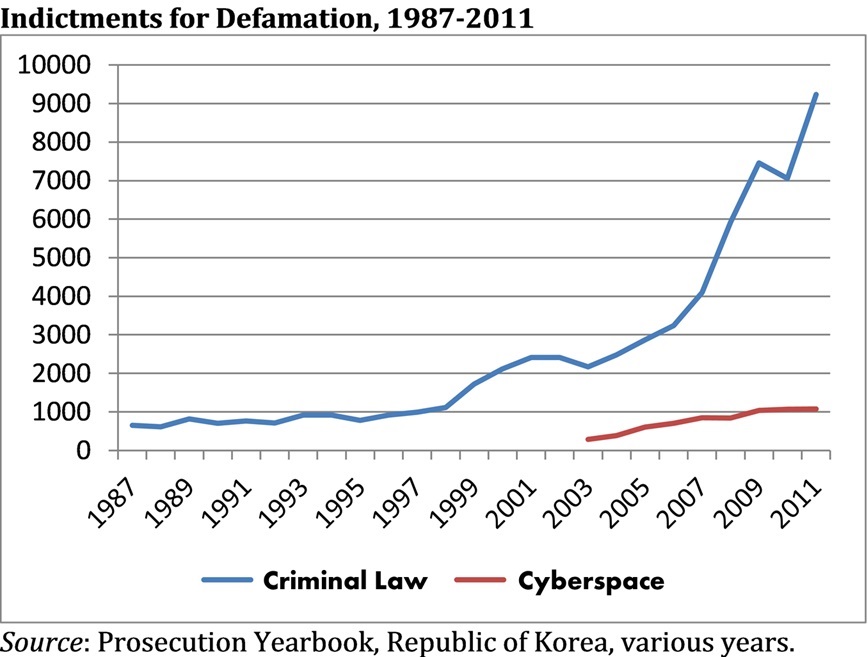 Perhaps the most widely-reported case came in June 2009 when four producers and a scriptwriter for the investigative television program “PD Notebook” were indicted on defamation charges for a 2008 report on U.S. beef imports; the report helped spark weeks of protests. They were subsequently arrested and charged with defaming the Minister of Agriculture. The courts did claim to find some exaggerations and inaccuracies in the reporting but nonetheless found it generally true to the facts. From the Seoul Central District Court to the Supreme Court, the courts consistently acquitted all staff but the detention and trial of the journalists subjected them to lengthy and costly legal procedure and had a marked chilling effect on public discourse. As can be seen from the figure, the case was hardly unique and defamation cases have continued to be filed by the new Park government.

The strongest response from the legislators came—not surprisingly—in the discussion about the election laws. Korea’s election law provides a pervasive system of restrictions on the time and manner of election campaigning. Article 93 of the POEA prohibits individuals from distributing or posting advertisements, posters, “or the like,” supporting or opposing a political party or candidate for a period of 180 days before the election to the election day. The statute then generally prohibits any campaign activities before a short 14-day legal campaign period prior to National Assembly and local elections and a 23-day period prior to presidential elections. Punishment for derogations is harsh: individuals and civil society organizations violating these provisions are subject to imprisonment of up to two years or fines of up to 4 million won.

These restrictions on campaigns—apparently copied from the Japanese election law which contributed to LDP hegemony--produce enormous incumbent advantage because challengers are unable to effectively promote themselves before the legal campaign period. Moreover, there is a troubling trend of incumbents using the advantages of office to aggressively prosecute opposition candidates, both for the prohibition on campaigning in the pre-campaign period and on claims of false election speeches and slander.

The latter set of violations are of particular concern because of the discretion granted to the Supreme Prosecutors’ Office in defining what constitutes false election speech and slander; even negative campaigns based on correct information of a candidates’ positions have been deemed slanderous. The consequences for illegal campaign speech are grave. Anyone who publishes false facts about a candidate and his or her family for the purpose of defeating the candidate in the election is punishable by imprisonment of up to seven years or a fine between five million won and thirty million won. However, even publication of correct information about a candidate that is deemed slanderous could be punishable by imprisonment of up to three years or a fine of up to five million won, although a violator could be immune from punishment if the publication of the true facts is subsequently deemed in the public interest.

The table below shows trends in investigations, indictments and detentions for all election-related crimes from the 15th National Assembly elections in 1996 through the 19th NA elections in 2012. It also breaks out all investigations by the type of crime, including illegal use of money or gifts; “black” propaganda in violation of the Election Campaign Law’s provisions on false statements and slander; illegal propaganda, or those who violated provisions on the timing or methods of campaigning; and other violations. The use of these laws has occurred across all administrations discussed here, with particular spikes in all investigations during the 2000 and 2004 elections. However, the number of people investigated for “black propaganda” which increased from 287 during the 15th National Assembly elections to 655 in the 19th NA elections. 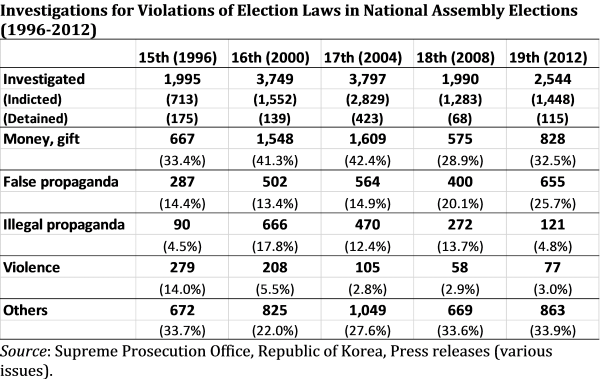 Solving these issues is not easy, and about a dozen of the legislators—all from the opposition DP--spoke about their struggles with the law. On the one hand, several had been targeted by the government on illegal and black propaganda charges; my colleague had been indicted for statements in support of his wife’s National Assembly campaign even though the statements made were true. On the other hand, legislators were also worried that the failure to provide some protections against “black propaganda” would unleash torrents of false allegations that could smother a campaign. The opposition legislators were also concerned that the concentration of the conservative media put them at inherent disadvantage and that more—not less—regulation of the press was required.

Finding the balance is harder than it looks, and the sludge of American campaigns hardly seems a refreshing model to advance. But the organizer of the symposium, National Assemblywoman You Seung-hee, closed the meeting with a strong statement in favor of reform on a number of fronts, from the NSL to criminal defamation. Sadly, not a single member of the Saenuri attended the meeting.

Should the blue line in the chart be labeled "criminal"? Says "crimial."

that Saenuyri boycotted the meeting is no surprise.