The food situation in North Korea

On 25 November, the FAO/WFP released a special report on the food situation in North Korea that concluded that despite an improvement in the fall harvest relative to the previous year, the North continues to face an “uncovered deficit” and that the population faces another year of “prolonged food deprivation.”  In other words, the new report is more or less indistinguishable from every other report these organizations have put out since the famine ended in 1998 and North Korea entered its chronic food emergency. (In fairness, there are some innovations in this report, such as an explicit consideration of the basis of post-harvest loss estimates, long a source of controversy, and a much more systematic analysis of household vulnerability and coping mechanisms.)

Most of the public commentary on the report has focused on the assessment of an improved harvest, attributed in the report to the greater availability of inputs, including fertilizer. Increased output is to be welcomed, but does not necessarily translate into a widespread improvement in conditions.  As the report intimates, the state-run public distribution system is not the key mechanism for accessing food for much of the population.  Our adjustments to the FAO/WFP data suggest that North Korea indeed remains below the minimum human needs level. 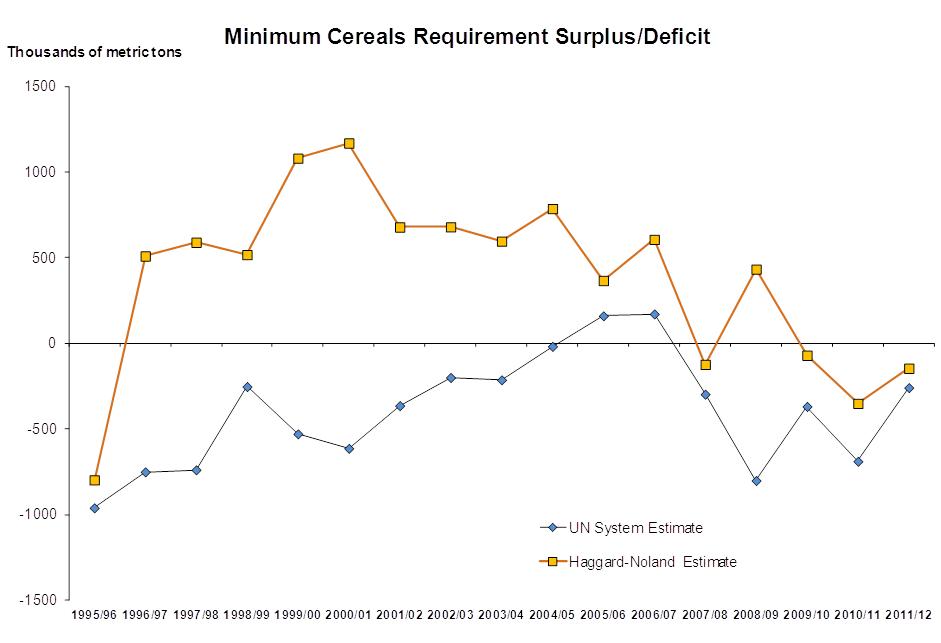 But the focus on physical balances risks distracting us from the real driver of food insecurity in North Korea.  The market is the critical institution. What matters crucially are both the level of prices and the distribution of income. The report indicates that for the first time the FAO/WFP teams were allowed to visit markets. As demonstrated yesterday, food prices are rising rapidly in domestic currency terms; indeed, the Chosun Ilbo just ran a report indicating that the price of rice had reached 5000 won. Abundant evidence suggests that the distribution of income in North Korea is becoming less equal. The upshot, as the WFP report makes clear, is that some swath of the non-elite population is being squeezed, with a reported 50-100% increase in hospital admissions of malnourished children and rising numbers of low birth-weight babies.

The report indicates that the WFP has received only 31 percent of resources needed to support its current program. (Note to WFP: if the US is the major donor, then releasing a report on Thanksgiving weekend may not be the best tactic for maximizing impact.)  This outcome reflects both donor fatigue as well as competing demands elsewhere, particularly in the Horn of Africa. The New York Times has reported that US aid is being delayed over “misappropriation concerns,” i.e.  diversion. South Korea has announced that some aid destined for North Korea is being re-directed to Africa, though the explanation was that the North Koreans had turned down the aid, not that the South Koreans were worried that it was being diverted from the intended beneficiaries.

In short, for all intents the food emergency in North Korea resembles the classic case first analyzed by Nobel laureate Amartya Sen in which famine emerges not due to an aggregate physical shortage of food but rather the inability of poor households to generate the income to purchase it in the market.

Are these reports ever translated into Korean? They must surely be in order for the North Koreans to read the recommendations, but it would also be of help in disseminating hopefully neutral third-party information in the South.