A common trope among North Korea watchers is that North Korea has the asymmetric capacity to inflict damage on South Korea.  By raising tensions, North Korea can disrupt South Korea’s financial and foreign exchange markets and even deter foreign investment. North Korea, by contrast, is immune from the consequences of such actions because of its authoritarian system and closed economy,

While this argument has some intuitive plausibility, past nuclear and missile tests do not appear to have generated long-lasting effects. In the recent case of the Yeonpyeong shelling, however, the North Korean provocation appears to have boomeranged, tanking the North, not the South, Korean market. 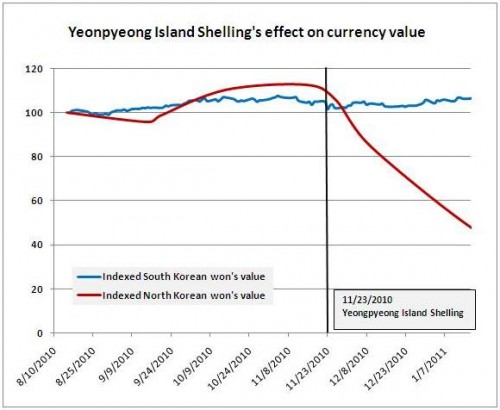 As shown above, the impact on the South Korean exchange market was limited and brief. On the North Korean side, to be clear, our data refer to the black market exchange rate of the North Korean won, not the official rate (which is rarely used in actual trade or investment transactions and moves only by fiat). But market participants are all operating on the black market rate, and the economy has seen increasing dollarization. Depreciation of this magnitude is significant.

The episode points to a basic problem confronting the North Korean economy: the high level of financial repression (and economic repression more broadly) contributes to thin, underdeveloped markets that are more prone to panics and wild swings in prices.  The disastrous currency reform has already primed market participants to be wary of the domestic currency, and macroeconomic instability in its wake has not helped either. The North Korean leadership may not be swayed by such considerations but we are doubtful that the leadership can be entirely sanguine either: exchange rate movements of this magnitude have implications across a range of markets, including the cost of imported food, and thus affect core supporters as well as the general population. North Korea’s provocations appear to be doing more damage to its own economy than to South Korea’s, no doubt one reason for the current push from Pyongyang to re-engage.