Solar Power for the Chinese Market

The Chinese solar power industry first entered the market for mass production of solar panels in 2004. The industry  has since grown to dominate world production, making up  70 percent of  worldwide photovoltaic shipments in 2013.   By 2015, this boom,  driven by large private companies in China, had  created three Chinese solar industry billionaires.[1] But  there has also been some pushback against Chinese-made solar panels in the international market, particularly in the United States, which imposed anti-dumping duties on Chinese solar panel imports in 2012.  To overcome the effect of these new import barriers, Chinese solar power firms  need to shift their focus by  providing solar power for the Chinese market as well as internationally.  Expanding  solar-generated power within China  could also help  China move away from high-polluting industries while implementing the  deal with the United States last year to curb CO2 emissions.

While China is a leader in production, it falls behind Germany and some other strong solar markets  in solar power generation. Figure 1 shows the total GwH of electricy generated in 2012 from solar photo-voltaic power in China, in total and as a share of  total electricity generation. Compared to other large emerging markets, China is the leader in solar electricity generation, producing similar volumes as Japan, but it falls  far behind solar-power leaders Spain and Germany.  In terms of its  share of electricity generated through solar power,  China has diversified into solar at low or mid-levels, similar to India and the United States.

The key to China’s falling behind in solar power consumption, as opposed to production , lies in its inadequate infrastructure. Solar electricity is simply not sufficiently available to the people and businesses that might use it. Figure 2 shows how much infrastructure is in place to process energy from solar and wind power, alongside the installed capacity for total power that is produced. Figure 2 also plots the growth in wind generation and capacity over the same period.  The capacity for wind power increases, starting in 2006. By  2013, 6 percent of all installed capacity in the Chinese market was captured by wind power.  Between 2012 and 2013, a still small, but similar uptick occurs in capacity for solar-generated electricity (now representing 1 percent of total capacity), indicating that solar power may follow the same path as wind power generation has since 2006. 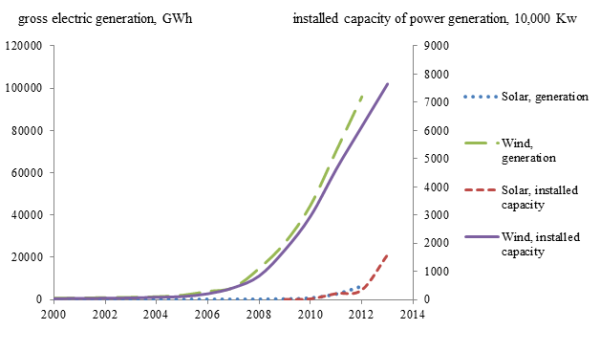 The Chinese government has indicated it plans to further increase solar power electricity generation internally.  In 2013, Beijing released a statement promoting further development of the photovoltaic industry, noting that excess capacity was a problem and that manufacturing should move to serve the domestic market rather than relying on external sales (link in Chinese).   At this point, with a combination of strong private industry and political will, China has the capacity to be the leader in consumption as well as production of solar power.