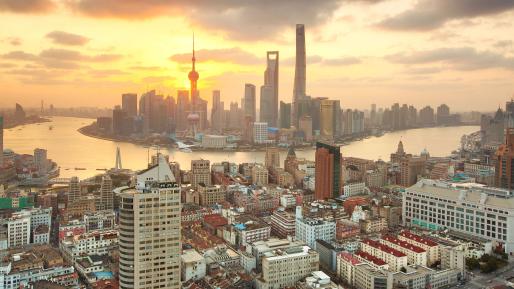 Chinese authorities are carrying out a sweeping regulatory crackdown on private technology firms this past year, wiping off hundreds of billions of dollars from the market capitalization of some of the largest private companies in China. Some Chinese private entrepreneurs are reportedly avoiding long-term investments amid rising uncertainty in the regulatory environment, jeopardizing prospects for innovation and productivity essential to China's future growth. Many analysts see Beijing's regulatory campaign as aimed less at curbing monopoly power and more at exerting greater control of the private sector, making it subservient to the party.[1] China's private sector is thus widely described as facing an existential threat. Whatever the motivation by China, the perception that China's private sector is imperiled is overblown. In fact, the Chinese internet companies subjected to this campaign are a small component of a large private sector that is still investing, growing, and outperforming the state sector.

China has a robust, large, and fast-growing private sector. According to the Chinese statistical authority, there were nearly 20 million private-controlled firms in China as of end 2019, and only 266 thousand firms controlled by the state (see figure 1). The number of private-controlled firms has increased nearly four times over the past decade, but the number of state-controlled firms has grown only marginally. In addition to private-controlled firms, there are almost 83 million individual businesses (getihu) owned solely by one natural person and not registered as companies as of end 2019. Private-registered companies2. and individual businesses combined account for over half of total employment and a much larger share of employment in urban areas in China as of end 2019. The private companies hit by Beijing's regulatory tightening over the past year, though among the largest in terms of size, are simply a small portion of the entire private sector in China; there are probably many more innovative private firms that have yet grown big enough to be on anyone's radar. 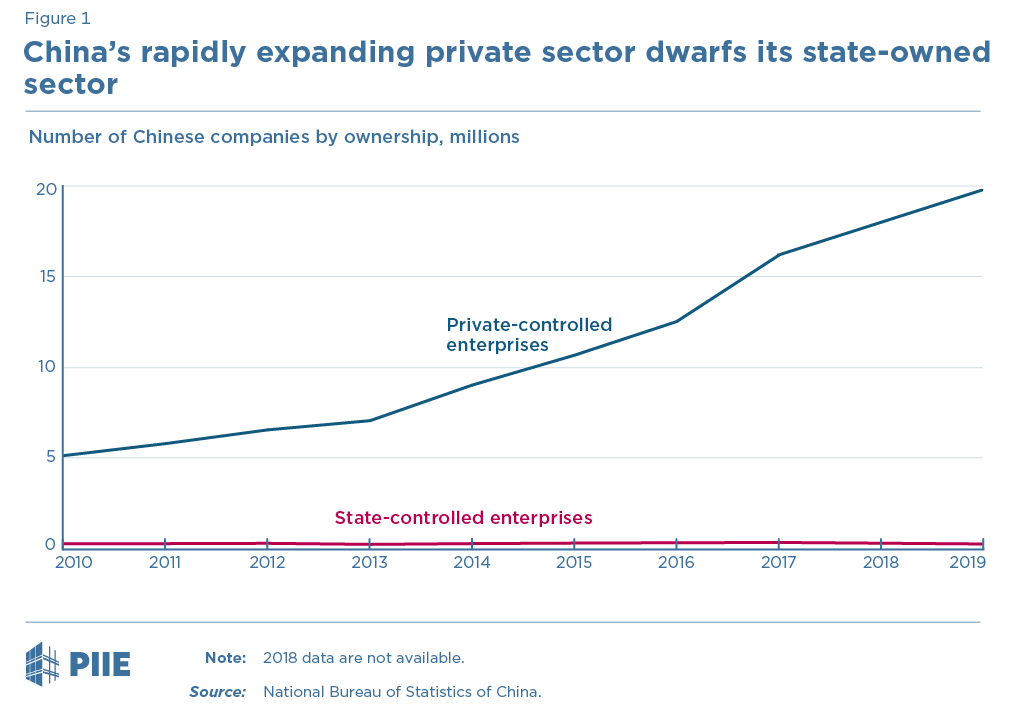 Moreover, the postulated decline in investment by private entrepreneurs in response to the regulatory crackdown has yet to show up in the investment statistics. Monthly investment statistics released by the Chinese statistical authority show that nongovernmental (minjian) fixed asset investment, which is predominantly made by private firms,4. continues to account for nearly 57-58 percent of total new investment through August 2021, despite the regulatory tightening of the past year (see figure 2). Statistics on industrial value-added also suggests that as shown in figure 3, in industry, the private sector is continuing to outperform state companies. As figure 3 shows, year-over-year growth in value-added of private industrial firms has continuously exceeded that of state firms through August 2021, though reported year-over-year industrial value-added growth has been on the decline across board, mostly due to base effects, i.e., industrial output shrank in the first quarter of 2020 making the recovery in early 2021 very elevated. 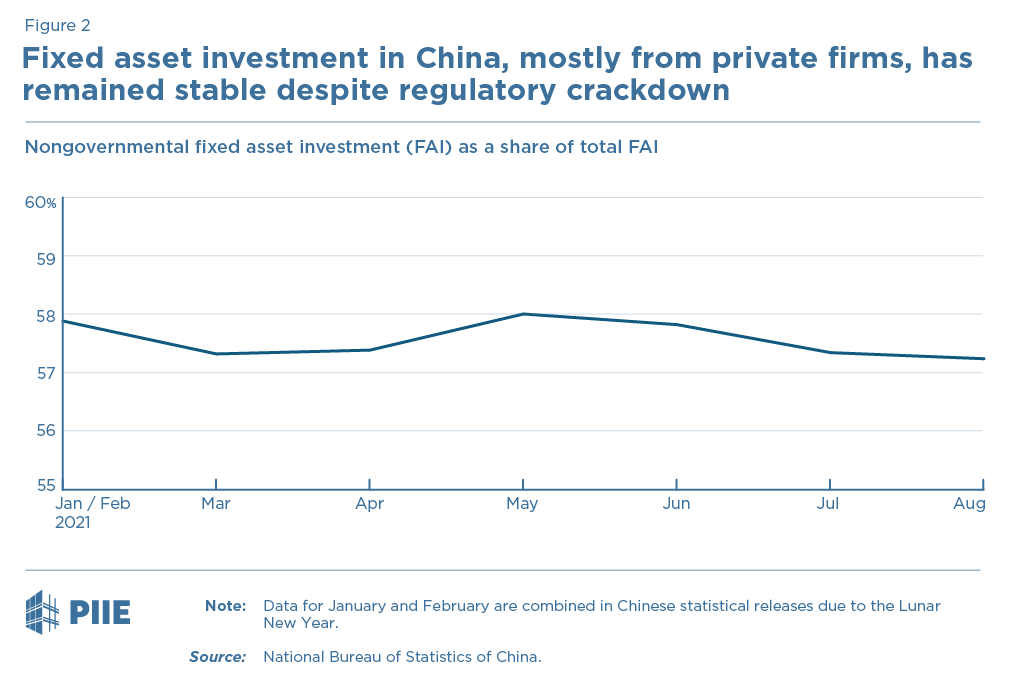 Much of what Beijing is doing is long overdue. As our colleague Martin Chorzempa argues, Beijing has logical public policy reasons to rein in the country's tech giants, just as Washington and Brussels are pursuing similar efforts to curb the power of big tech companies out of their own concerns. Increasing antitrust scrutiny and protecting personal data collection will help improve consumer welfare that has been undermined by the increasingly aggressive monopolistic behavior of some Chinese tech giants. The crackdown on after-school tutoring, as another example, is intended to lower child-rearing costs in urban China where high costs in education and housing are deterring many would-be parents. 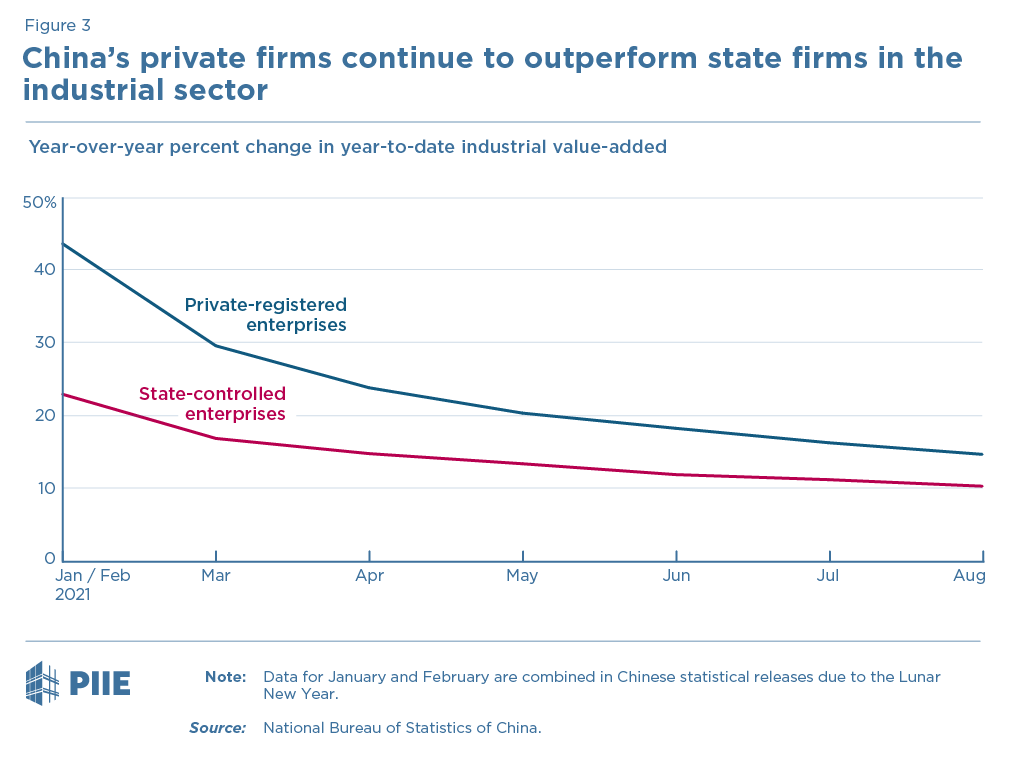 While proper regulatory policies are needed, many of the regulatory moves of the past year were abrupt, leading to a sharp decline in the value of some of the best-known Chinese private companies and roiling financial markets. The fast-changing regulatory environment is also making long-term planning more difficult for businesses and investors. Even though Beijing seems willing to trade short-term pain for long-term gains while setting guide rails for future growth, some economic self-harm could have been avoided if there were greater regulatory predictability. With the recent unveiling of a five-year blueprint on rule of law of the Chinese government that sets out goals in strengthening legislation in a range of areas including antitrust, it is widely held that the current regulatory crackdown is just the beginning of a wider campaign. Before moving on to the next items on its to-do list, if there is one, Beijing needs to learn an urgent lesson from the past year and weigh potential adverse effects of its intended actions on the broader economy more carefully.

3. The exchange rate used to convert renminbi to US dollars in this post is as of October 8, 2021.