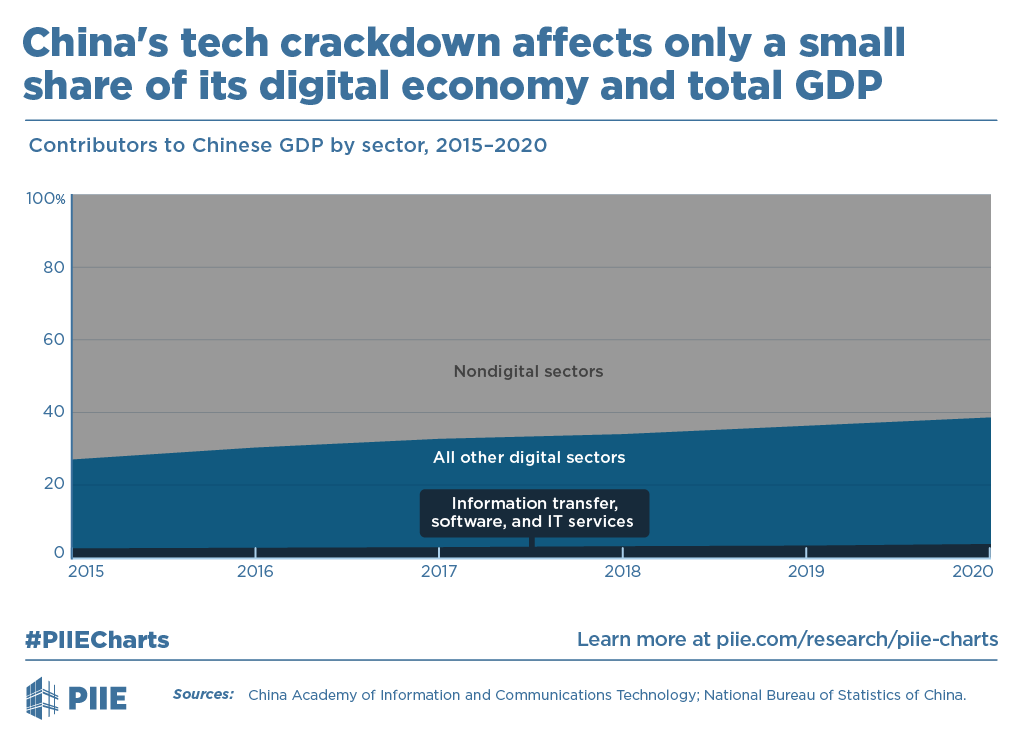 Some seem to have mistaken the digital share of China's economy for the contribution of the internet companies to its GDP. The digital economy accounts for nearly 40 percent of China's GDP, according to the China Academy of Information and Communications Technology (CAICT), a government-affiliated think tank.[2] But CAICT's definition includes platform services, manufacturing and services surrounding digital devices, as well as application of digital technology in nondigital sectors like agriculture and finance. According to China's statistical authority, the direct value-added of information transfer, software, and information technology services—which is the category in which the value-added of internet companies is counted—accounted for merely 3.7 percent of China's GDP in 2020. The figure shows the contrast between the two series.

Internet companies indirectly contribute to China's economy by raising the productivity of, for example, firms and individuals selling things on e-commerce sites. But despite the tech crackdown, that ability of firms to provide internet-based services does not seem to be impaired, as China's online retail sales have kept growing and ride-hailing services have continued to expand in recent months.

This PIIE Chart is adapted from research for Tianlei Huang and Nicholas R. Lardy's blog, Is the sky really falling for private firms in China?

1. These include JD.com (#2 in 2020 Top 500 by revenue), Alibaba (#5), Tencent (#6), Zhaogang.com (#59), Meituan (#61), Baidu (#66), NetEase (#122), KE (#128), Huitongda (#194), TAL Education Group (#339), and Weitian Yuntong (#432). Among the internet companies in the top 500, Zhaogang.com, Huitongda, and Weitian Yuntong are not yet publicly traded, and thus are probably less known than the others. Zhaogang.com is a specialized e-commerce platform for the steel industry. Huitongda is an e-commerce platform serving rural China and is now planning an IPO in Hong Kong. Weitian Yuntong is a logistics information service provider.