This year has seen yet another series of flare ups in China-Vietnam tensions over oil exploration projects in the South China Sea.  Most dramatically, in May, a Chinese oil rig exploring area around the disputed Paracel Islands, sparked anti-China protests in Vietnam.  More recently, Vietnam and India’s October defense and oil exploration agreement has been met with Chinese opposition as the oil blocks set aside for Vietnam-India joint development overlap with blocks that the Chinese National Offshore Oil Corporation (CNOOC) attempted to auction off for exploration and development in 2012.

This post assess the development of CNOOC offshore activity in the context of trends in overall Chinese oil and gas production to better understand both ongoing and future Chinese energy interests in the  South China Sea.  While offshore crude oil and natural gas production represents only a small share of total Chinese energy production, for CNOOC, the South China Sea has been an important source of offshore natural gas. Going forward, it is not clear that there will be the same tension over oil reserves in other disputed territories, primarily because estimates of total oil and gas reserves in the South China Sea are low (representing less than 5 percent of the world’s estimated reserves), they are particularly low around the contested Spratly and Paracel Islands. 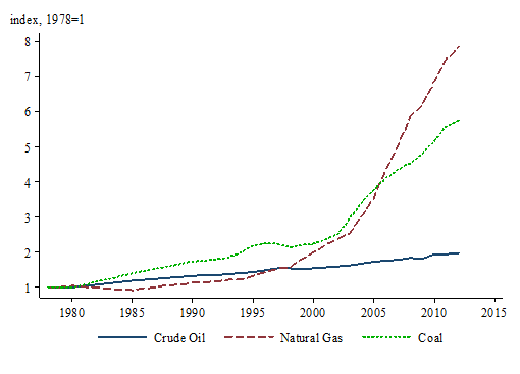 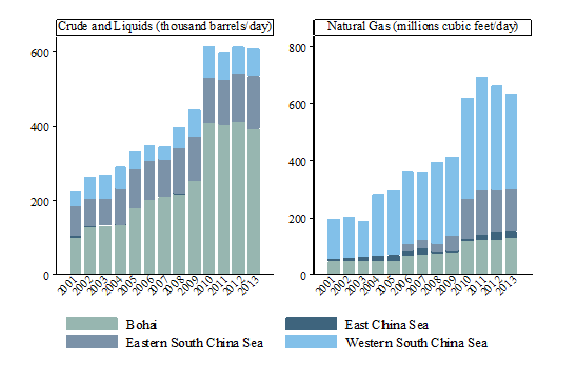 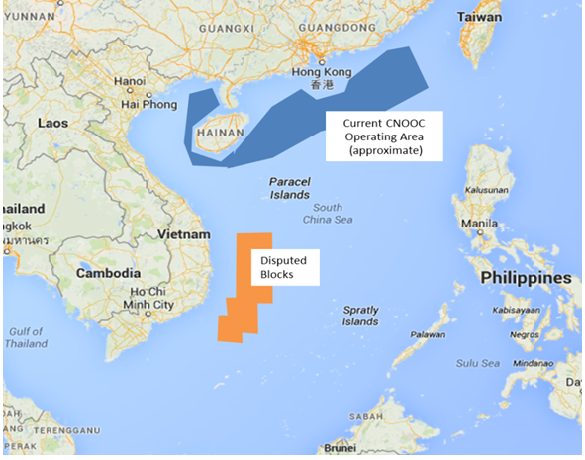 These nine blocks fall within Vietnam’s Exclusive Economic Zone, which under the UN Convention on Law of the Sea gives Vietnam exclusive rights to the oil and natural gas reserves therein, but are also part of China’s “nine dash line” territorial claims.  Both CNOOC and PetroVietnam (Vietnam’s state owned oil company) have actively sought to explore and auction off this same territory to outside oil companies and as of this July, Vietnamese production has continued to move forward in these areas, while the contested CNOOC blocks remain inactive.  This reflects the relative importance of offshore oil and natural gas production for Vietnam, which in 2011 relied on offshore South China Sea production for 95 percent of crude oil and 80 percent of total natural gas production.[iii] Moreover, assuming that the current disputed blocks remain under Vietnamese control, the US Energy Information Administration estimates that Vietnam’s offshore crude oil reserves are double Chinese reserves, and also more substantial than Chinese natural gas reserves.[iv]

Outside of these nine currently disputed blocks, it is unclear oil and natural gas production will hamper the resolution of the rest of the territorial conflicts in the South China Sea.  This is because most of the estimated oil and gas reserves in the South China Sea are in coastal and non-disputed areas (see map). [v]  The IAE estimates that there are little or no probable oil and natural gas reserves surrounding either the Spratly or Paracel Island chains.

There are also precedents set for joint cooperation in oil exploration despite overlapping territorial claims in the region, with joint development projects between Malaysia and Brunei, Thailand and Vietnam, and Malaysia and Thailand.  For China and Vietnam, similar cooperation seems unlikely in the short term, since there has been no coordination on current crude oil and natural gas exploration or any moves towards settling Vietnam-China territorial disputes.  Instead, despite the relative unimportance of the South China Sea for total Chinese energy production and the current downturn in oil prices, the periodic conflicts over drilling rights between the two countries over the past few years are likely to continue indefinitely.

[i] Author’s estimates based on data from the International Energy Agency, US Energy Information Administration and CNOOC annual reports

[ii] China and Vietnam reached an agreement to divide the Gulf of Tonkin and its resources in 2000.

[iii] Author’s estimates based on data from the International Energy Agency, and US Energy Information Administration