Speculators in Wall Street learned a new term recently, the “Chinese Dama” (中国大妈), which refers to middle-aged female shoppers who can move markets. After the gold price fell significantly—by more than $200/ounce in April—the Damas moved in, purchasing gold as if they were cleaning out the jewelry stock at Costco. The gold prices then rebounded to $1485/ounce from $1336/ounce in 10 days.

As a result, sales of gold and jewelry in China amounted to 30.3 billion renminbi in April, rising by 72 percent year over year (YoY), according to the National Statistics Bureau. The China Gold Association also showed that gold consumption totaled 706.3 tons for the first half of 2013, up by 53.7 percent YoY, while total gold production was only 192.8 tons, up by 8.9 percent YoY, reflecting the increasing gap between domestic gold supply and demand.

Similar to China, based on statistics from the World Gold Council, global gold consumption grew by 30.6 percent YoY to 2012 tons in 1H13, a five-year record high. Gold consumption continued in 3Q13 but decelerated from the fever in 2Q13, while gold prices became more volatile and recently fell to below $1300/ounce in anticipation of quantitative easing (QE) tapering, and as the US government officially shutdown on October 1st . The trend of high gold prices and the possibility of increased consumption in the future have attracted increasing attention.

Serving as the stabilizer of the global economy, gold has had the primary function of hedging against risks from uncertainties and fluctuating dollar value. Gold has been traditionally favored by investors as a safe haven during periods of volatility such as falling growth, high inflation, crises, etc. Historical co-movement between gold price and inflation provides evidence for gold’s long standing risk-hedging characteristic. Furthermore, gold prices have often moved against the US dollar valuation to protect investors from depreciation risks of the dominant world reserve currency. As a whole, the price of gold has appeared anti-cyclical, staying within the range of $250 to $700 per ounce for the past three decades before the financial crisis broke out in 2008.

The movement of gold prices changed significantly after the financial crisis in 2008. Under aggressive QE by global central banks to bail out markets from the crisis, gold prices surged from $800/ounce in 2008 to over $1800/ounce in 2012 due to the combined effects of excess liquidity and hedging uncertainties. With gradual stabilizing global economies and increasing possibility of QE tapering, gold prices have declined significantly to $1295/ounce from $1796/ounce during the past 12 months. Some investors have forecast gold prices to fall below $1000/ounce soon and then to move within their previous range after QE tapering. However, gold prices have already started a new track after the financial crisis, and will be on an upward trend for the coming decades, mainly due to continuously sufficient liquidity, rising structural demand, and limited supply.

Central banks of emerging economies accumulated sizable foreign exchange reserves after the Asian financial crisis in 1997. Total foreign exchange reserves of emerging economies reached $5.8 trillion by the end of June in 2013, up from $523 billion by 2000, and their percentage of world total FX reserves rose to 50.2 percent from 27.5 percent in the same period, according to data from the International Monetary Fund (IMF). 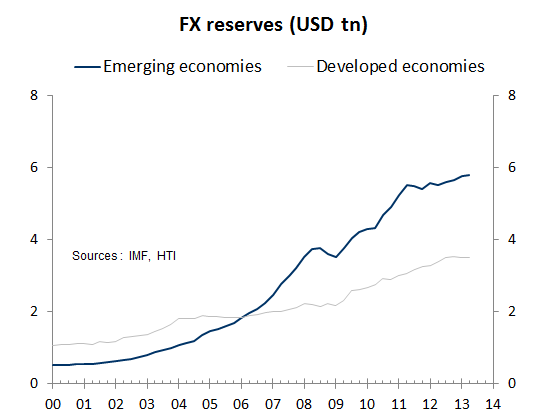 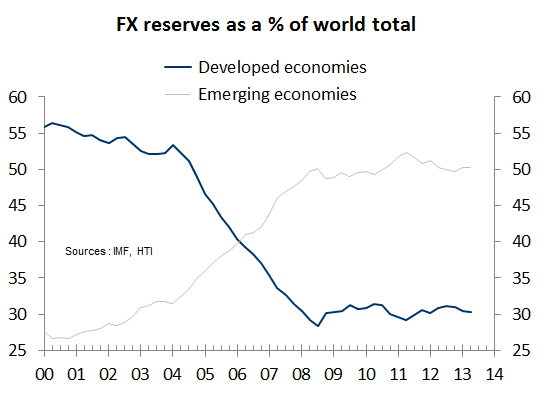 The dollar and euro are two dominant currencies in FX reserves, accounting for 53 percent and 21 percent, respectively, of world total reserves by 2H13. Both currencies, as well as other reserve currencies, have significantly depreciated against currencies of emerging countries during the past decade, leading to a loss of value in nominal terms for the foreign exchange reserves of emerging countries. As a result, there is increasing demand for emerging economies to diversify their FX reserve allocation via various channels. Increasing shares of gold is therefore a natural choice. Currently, gold reserves held by the central banks are up to 32,000 tons, accounting for about 8 percent of world reserves, 85 percent of which are owned by central banks of developed economies. 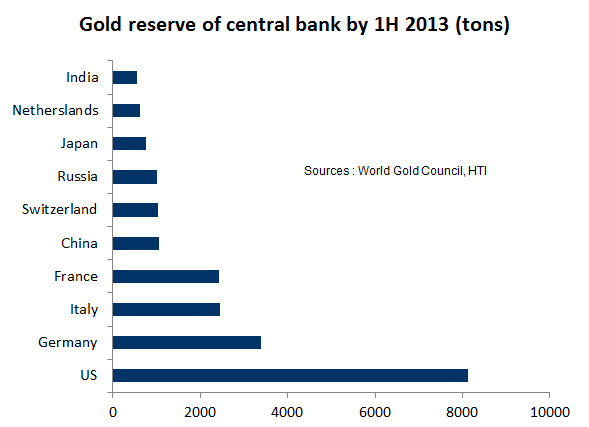 Central banks of emerging economies have shown increasingly strong incentives to increase the gold position in their FX reserves. Net gold purchases of central banks have accelerated for the past four years, from -34 tons in 2009 to 544 tons in 2012, and most were acquired by emerging countries. As a result, gold reserves of emerging countries surged over 50 percent  to 3700 tons by 2012, mainly contributed by rising holdings from Russia, China, Turkey, and India, up by 464, 451, 325, and 200 tons respectively. The trend of increasing gold position in FX reserves will continue for the coming decades, which provides a strong support for gold prices.

Post financial crisis, gold prices are likely to stay on an upward trend for the coming decades, due to persisting structural demand, including rising incentive of emerging market to  add gold to their already sizable FX reserves, surging household consumption, and investment demand for gold products in major emerging countries. Limited inventories with rising production costs will strengthen the supply-demand gap and push up gold prices further. The recent fall in gold prices is a normalization process after price overshooting amid the global crisis and excess liquidity. Therefore gold prices are likely to follow an upward trend again after stabilizing at a level above $1000/ounce.

How to Avoid a New Cold War Over Critical Minerals