Earlier this month, China released the third quarter balance of its foreign exchange reserves, which showed a quarterly increase of $166 billion in the 3rd quarter. Speculation on the reasons for this increase range from a loss of reform momentum in liberalizing its exchange rate, to China’s becoming a safe haven in times of macro uncertainty. We thought it would be useful to take a look at what could account for the increase/decrease in reserve accumulation in any given quarter. We will also expand on this and other aspects of China’s reserve policy in future posts.

In an economy with a semi-open (see Jeanne 2012) capital account and managed currency, foreign exchange reserves may accumulate. Reserves accumulate as the residual of capital and goods flowing into and out of the economy. If the sum of the current account balance and net private capital flows is positive, the central bank accumulates reserves to counter any appreciation pressure on the domestic currency. With this basic framework in mind, we’ll conduct a ‘bean count’ of the increase in Chinese reserves this most recent quarter, but that can be applied in any time period. We will work from this basic equation, and explain each element in turn. 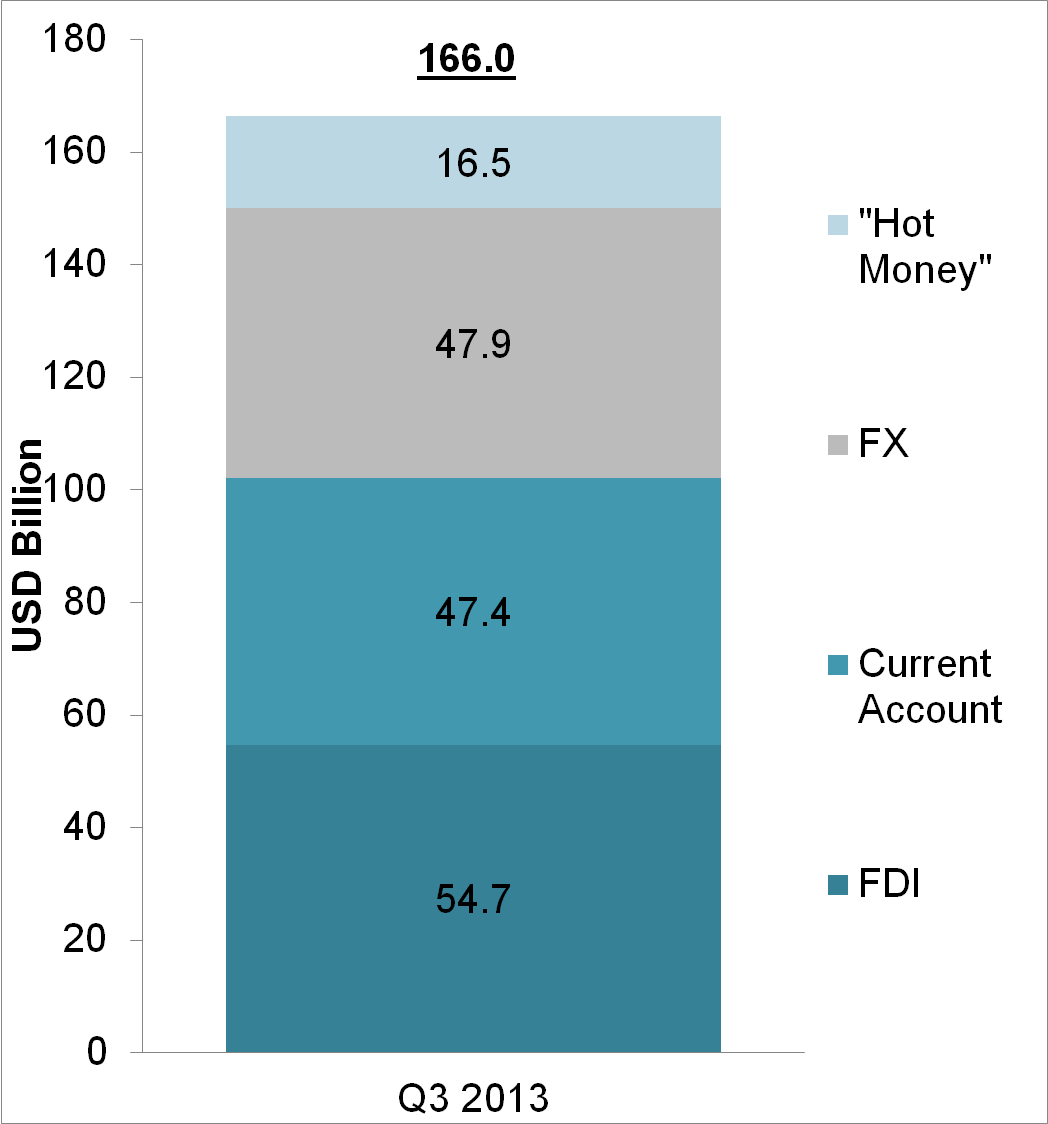 Let’s start with the two largest consistent contributors, the current account and net foreign direct investment. As the third quarter data has not been released, we estimate these two measures using the monthly trade balance and the utilized foreign direct investment series, respectively. For both of these measures, we take the sum of the three months in the 3rd quarter (July, August, and September), and compare them to the previous year’s sum. Finally we use that rate of change and apply it to the measure we are estimating, the current account and net FDI in this case. We believe that these are imperfect, but workable and straight-forward estimates in the absence of the final data. We arrive at an estimate of $47.4 billion for the current account, and $54.7 for FDI. These are broadly in line with expectations. This only accounts for approximately $100 billion of the $166 billion increase.

This turns out to be an important factor, in this most recent quarter, accounting for nearly a third of the change, by our estimates. The PBoC reports the value of its reserves in US dollars.   Changes in the value of non-USD portions of reserves in terms of dollars are indeed significant (see a previous post for more details). While China does not report the allocation of their reserves to the IMF’s COFER survey, we think it is a reasonable estimate to use. We will fine-tune this estimate in future posts. While the absolute majority of China’s reserves likely are in USD-dominated assets, 30% to 40% are invested in assets denominated in other currencies, namely the euro, yen, pound, and the other usual suspects. Given this significant non-USD allocation and the sheer size of the reserves, relative movements in those currencies could cause large valuation gains/losses. Many secondary reserve currencies experienced a bout of strength in the 3rd quarter; notably the euro and the pound, which increased versus the dollar by 4% and 6.4%, respectively. We conclude that changes in FX valuation in the 3rd quarter alone accounted for $48 billion in reserve accumulation.

Some observers argue that China’s reported reserves understate its true volume of reserves; we term the missing components “shadow” reserves. Shadow reserves include foreign currency balances that are not officially counted as reserves on the PBoC’s balance sheet, but have entered and remain in the economy the same way officially reported reserves have. These include things such as other foreign assets (OFA) on the PBoC’s balance sheet, capital transferred to sovereign wealth funds, required FX balances with state-controlled banks, and others (see Setser et al 2009). We do not include this measure here, but we will explore this particular area of “shadow” reserves in future posts. This most recent quarter, it would have accounted for a negligible $0.5 billion, but has been very sizeable in the recent past (i.e., in Q1’13, OFA increased by more than $50 billion).

Adding up our components, we don’t equal the change in official reserves. The residual we call “hot money”, or speculative investment flows. We estimate this to be between $15 and $20 billion. Now, this measurement is certainly debatable – given how stringent Chinese capital controls are – and one that we will refine in future posts. However, we believe this measurement follows the broad contours of other indicators of investor sentiment, such as the premium/discount of the 12-month CNY non-deliverable forward over the spot rate or the interest rate differentials (see figures 1 & 2). 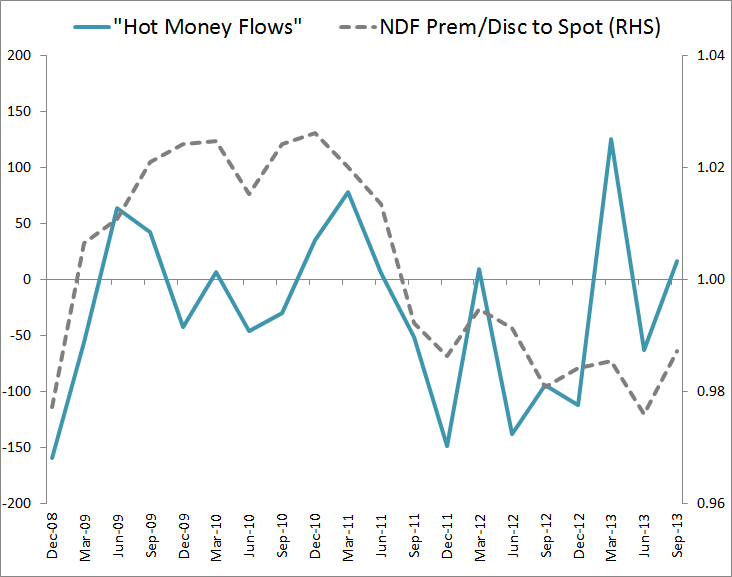 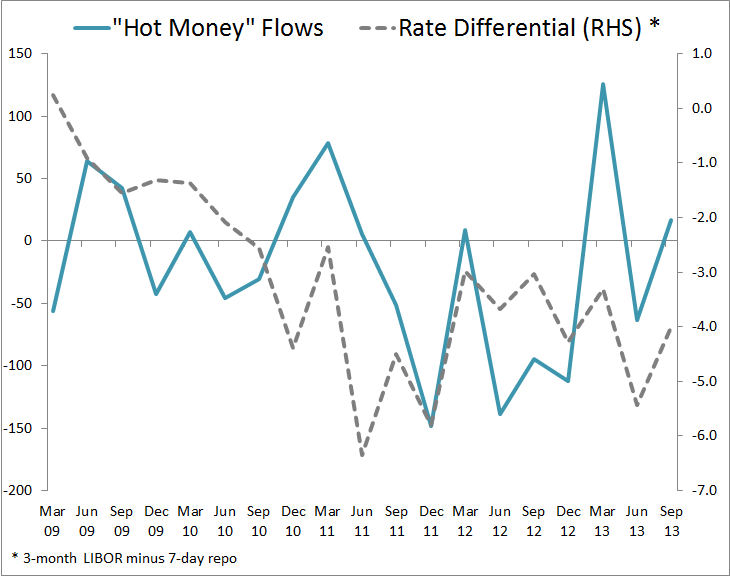 Tying everything together, we believe that the rise in reserves does not signal a sharp increase in hot money flows into China. Rather, it is almost entirely explained by the current account surplus, net FDI, and valuation effects of exchange rate movements.