Best House in a Bad Neighborhood: China’s Holdings of US Assets

According to recent data released by the US Treasury, China increased its holdings of US assets for a fourth consecutive month. With already over $1.8 trillion in US assets and renewed prospects of rising rates in the US, many analysts have questioned why China continues to acquire low-yielding dollar assets. Unfortunately, as explored in a previous post, the options for China are rather limited as to where else they can invest their enormous stock of nearly $4 trillion of foreign reserves. And as a fiduciary over public funds, there are principally three considerations for how a government allocates its foreign currency reserves: 1) safety, 2) liquidity, 3) return. Unfortunately for China (and some would say also the US), the primacy of the first two considerations leaves the US as the sole market that can substantially absorb the enormous demand from China’s reserves. And given that their headline reserves are continuing to increase rapidly, a like manner increase in US assets would also be expected.

Through the first ten months of 2013, China’s total holdings of US assets increased by $175 billion. Predictably, the largest contributor to the level increase was net purchases of long-term US Treasuries. Interestingly, China’s holdings of agency bonds have also been making a comeback, reversing a nearly 5-year trend of decline since the crisis. Demand for corporate bonds remains weak, and after accounting for valuation changes, net purchases of US equities also appears limited.

Exhibit 1: Annual holdings of US securities by China (all data $US billion) *Based on October 2013 monthly position survey

Given the vagaries of the monthly TIC data, many analysts have been wary of drawing conclusions from those data, preferring instead to wait for the annual survey released in April of each year which shows the stocks through the previous year. While it is true that the annual survey is the most comprehensive, the Treasury recently started collecting monthly holdings data, which should provide a much-improved estimate of intra-year movements than the monthly transaction data. The monthly transaction data (the S-survey) attributes the transactions involving US securities to the country of initial purchase. It does not account for the ultimate buyer/owner of those securities, and does not use security-level data, only aggregate asset categories. Therefore there exists a substantial ‘custodial bias’ – or an over-attribution of transactions to financial centers such as the UK, Belgium, the Caribbean Islands, etc. The newer position data (SLT survey) takes into account, on a monthly basis and by security, the positions by ultimate holders of US securities, negating to some extent the custodial bias. Additionally, the SLT survey has an expanded survey participant sample.

It should be noted that, while this data has been greatly improved, there are still several significant shortcomings. Firstly, the majority of the data is reported by US-based custodial banks. It does not account for US assets held in custody in a foreign country, or US assets bought by one foreign resident from another foreign resident. For example, if Chinese resident buys a US Treasury bond from a Japanese resident and holds it in custody at a bank in Switzerland, this will not show up on any of these surveys. (for more information on this data, refer to this paper from the Federal Reserve)

While the annual survey due to be released this April will be the first full year available to compare the SLT survey data to, the estimates from the partial sample from 2012 show a promising picture. As shown in exhibit 2, the difference between the monthly holdings data and the annual survey was much smaller than the adjustment from the monthly transaction estimate. The fact that both surveys are generally tracking fairly closely most likely reflects the expanded sample as well as an increased effort by officials to improve reporting coverage.

Exhibit 2: Monthly holdings of US securities by China 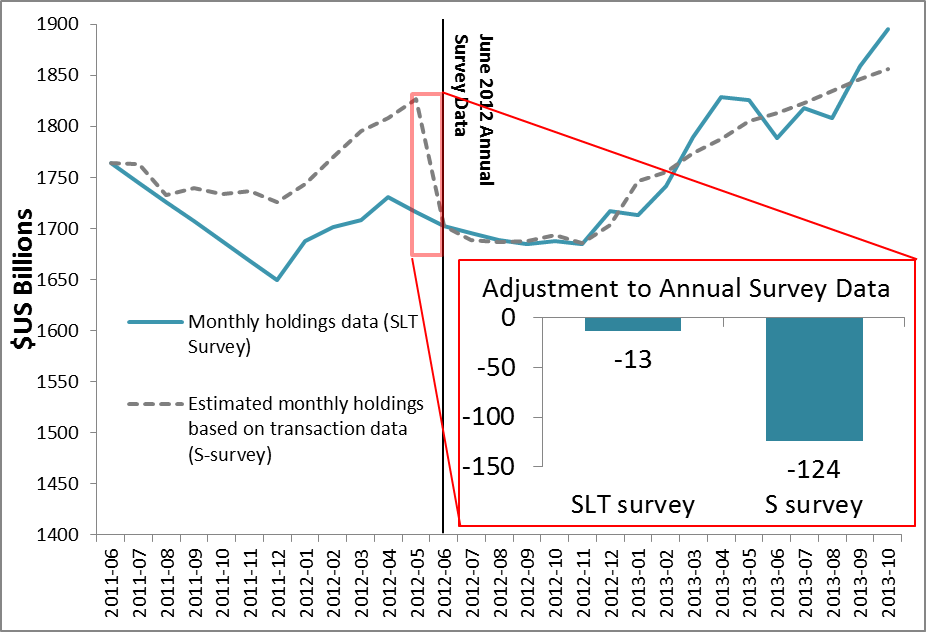 After the love [for Treasuries] is gone

As discussed in a previous post, China’s reserve accumulation has increased rapidly in 2013, and its net purchases of US assets along with it. Indeed, it, along with the Federal Reserve, have accounted for a sizeable portion of net purchases in the Treasury and agency bond markets. When China finally begins to allow the renminbi to float more freely and thus does not have to accumulate further foreign reserves, a large, price-insensitive source of demand (and thus force for lower rates) will exit the market. Who steps in (and at what price) to provide the demand, as well as the speed and manner in which China unwinds its own unconventional monetary policy, will determine the ultimate repercussions on the global financial markets.