The Chinese economy is on track to achieve 2 to 3 percent growth in 2020, which makes China the only major country expected to expand  in the wake of the COVID-19 pandemic. But the recovery comes with a price. The problem of zombie companies that China has been nibbling at for years has become bigger, posing a threat to the sustainability of the recovery. To avoid further damages to productivity and to improve resource allocation, Chinese policymakers need to shift focus from mere protection to restructuring and reallocation of resources as the economy enters recovery mode.

In reviving the economy, the Chinese government is rightly emphasizing protection of  businesses and workers. A wide range of policy measures targeted at small and micro firms, including cutting and exempting certain taxes and social security contributions, subsidized loans, and suspending the collection of interest and principal payments on loans, has effectively prevented unemployment from continuing to surge. China’s urban survey unemployment rate dropped from its peak of 6.2 percent in February to 5.6 percent in August, though unemployment among migrant workers has likely been undercounted, since those who lost their urban jobs and returned to their native villages in the countryside are not included in the survey.

China has cautiously tried to avoid relying primarily on massive credit expansion to stimulate its economy. But its nonfinancial corporate debt as a share of GDP still increased from 149 percent at the end of 2019 to nearly 160 percent by the end of March 2020, the largest increase in a single quarter since the global financial crisis, according to the Bank for International Settlements.[1] Recent news of a possibly immediate debt distress of China Evergrande Group—the second largest property developer in the country—has put the problem of China’s excessive corporate debt under the spotlight. Evergrande is not the only heavily indebted property developer in China. To prevent a systemic meltdown in the broader financial system, Chinese regulators recently introduced new tightening measures, placing a cap on how much a property developer can borrow. 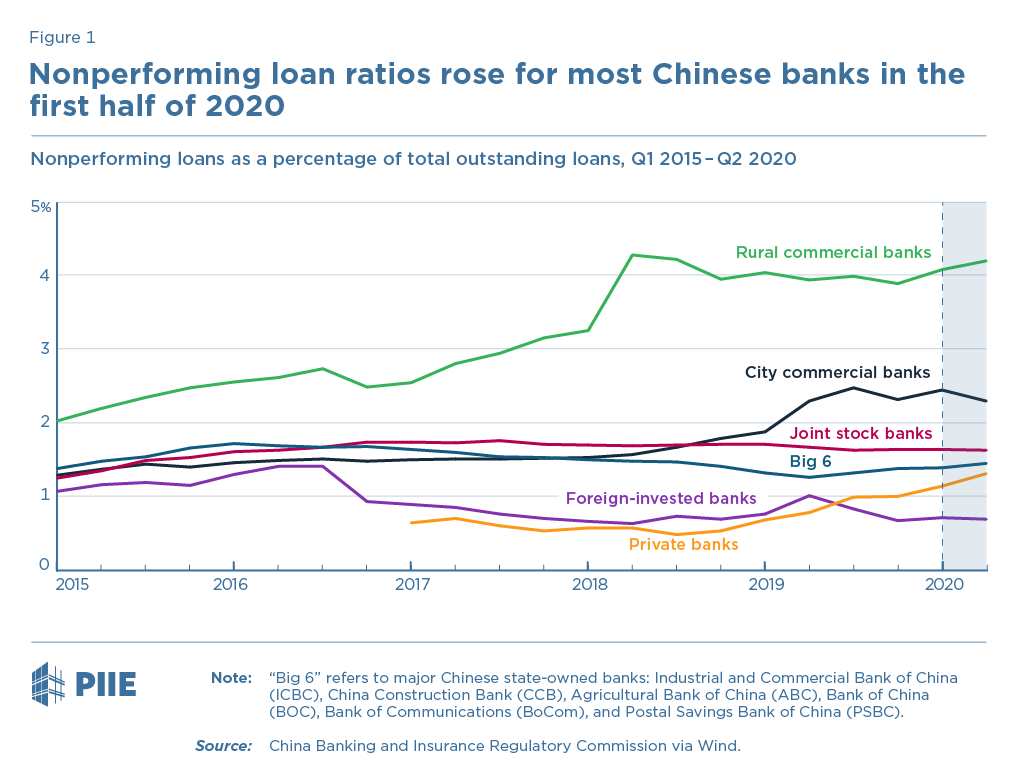 At the same time that nonfinancial corporate debt has risen, the quality of banking sector assets has deteriorated. Data from the China Banking and Insurance Regulatory Commission (see figure 1) shows an uptick in outstanding nonperforming loans (NPLs) in the first half of 2020 among most banks except in city commercial banks and joint stock banks. The official data, however, are likely underreported. On the one hand, the central bank has directed all banks to allow small businesses to delay repaying the principal and interest on their loans through at least the end of March 2021, as long as the firms agree to avoid large-scale layoffs. On the other hand, the banking regulator has asked banks not to classify those loans that are 90 days past due as nonperforming. The problem is that prior to the pandemic, some small banks—mainly city and rural commercial banks—did not classify those loans that are 90 days past due as nonperforming, which has resulted in insufficient loan loss provisions and inflated profits on their books.[2] The pandemic has likely exacerbated the issue of underreporting nonperforming loans in smaller Chinese banks.

Watch out for further zombification

During the first half of 2020, 2.3 million companies or 6 percent of all companies in China have gone belly up ; most of them were probably small private firms.[3] At the same time, supportive government policies may have formed many zombie companies or prolonged their life. This is probably inevitable at the height of a crisis, as the government’s highest priority is to maintain stable employment and to ensure people’s livelihoods. However, as the economy now enters recovery mode, it is time to gradually shift to restructuring the economy and cleaning up those nonviable zombie firms to avoid a further decline in productivity and efficiency in resource allocation that would hurt China’s growth prospects going forward.

China had a zombie problem before the pandemic struck in early 2020, especially among its state-owned enterprises. The number of money-losing state firms and the amount of losses rose for nine consecutive years from 2010 through 2018 (see figure 2). The government was hardly unaware of the risks this could bring to the economy and therefore had been nibbling at its zombie problem through bankruptcies since launching its deleveraging campaign in 2016. 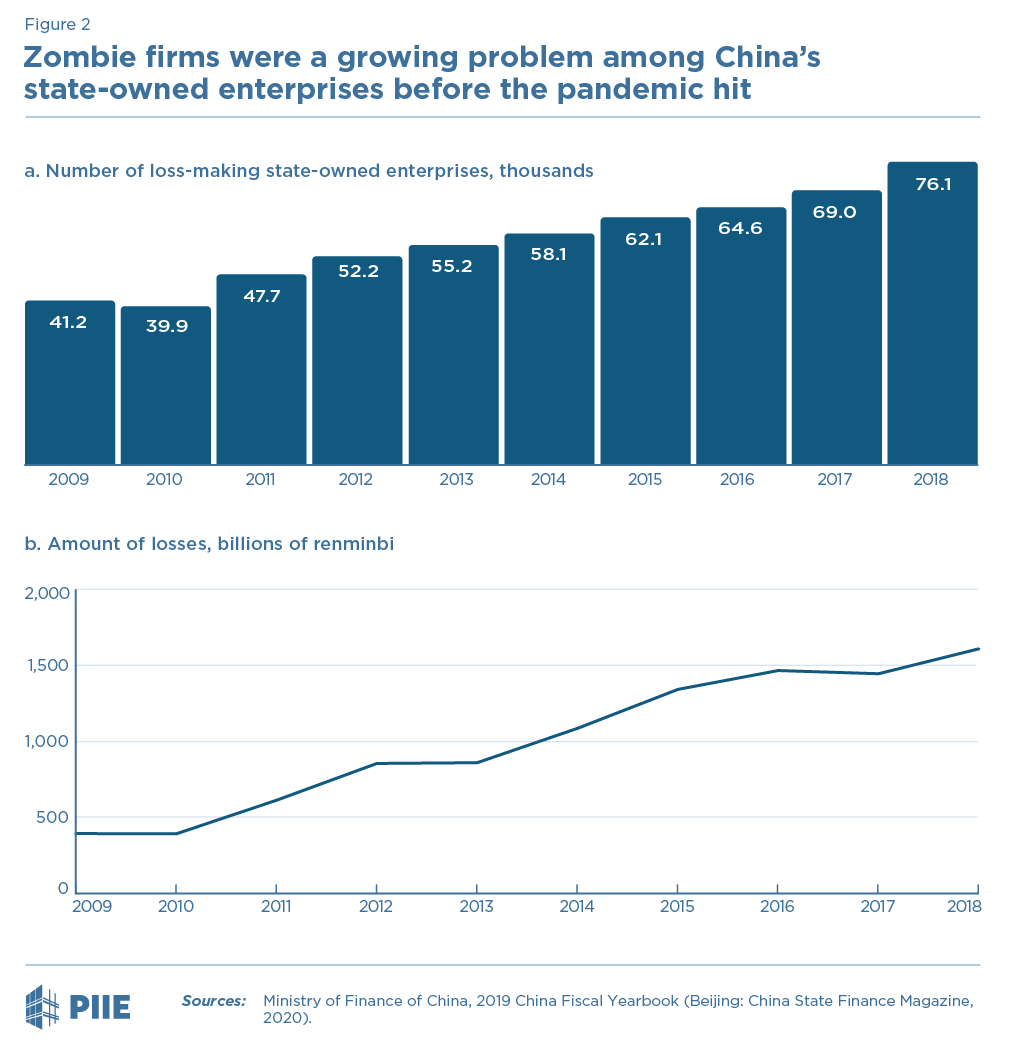 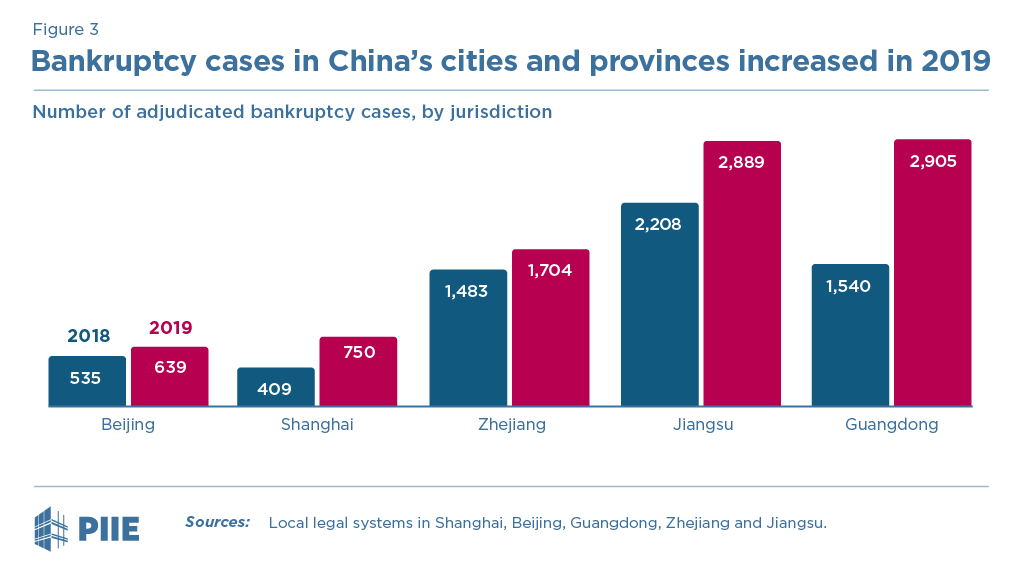 As for creditors, they can consider making greater use of debt-to-equity swaps. The government launched a debt-to-equity swap program as part of its deleveraging campaign in 2016, but the program has done little to reduce the stock of nonfinancial corporate debt in the economy. That said, the program can still play an important role in turning the many indebted but viable firms around with the economy now in recovery. The central bank can even consider a targeted cut in the required reserve ratio to support the swap program, as it did in July 2018. State-owned commercial banks can in turn use the liquidity freed up from the targeted RRR cut to implement more swap programs through their financial asset investment companies.

1. To be fair, the rapid increase in the nonfinancial corporate debt as a share of GDP was partly due to shrinking output in the first quarter of 2020.

3. According to Professor Li Shuguang of China University of Political Science and Law, around 2.3 million companies exited the market during the first half of 2020. By the end of 2019, China had nearly 38.6 million companies, according to the State Administration for Market Regulation.