China’s economic growth in recent years has been hobbled by the many long-term money-losing firms, often state-owned, dubbed as “zombie companies” because they are effectively insolvent but kept alive only by continuous bank loans and government subsidies. From 2008 to 2018, China’s nonfinancial corporate debt grew more than fourfold, from $4.56 trillion to nearly $20 trillion, according to the Bank for International Settlements. The International Monetary Fund (IMF) estimates that zombie firms constituted almost one tenth of all nonfinancial corporate debt in China in 2016.[1]

The Chinese government has repeatedly bailed out these unsound companies rather than let them fail, avoiding the pain of layoffs, tax revenue losses, and write-offs of loans that would require banks to rebuild their capital. Keeping these zombie companies alive has produced overcapacity in many sectors and chronic resource misallocation.

China is hardly unaware of the problem. Since launching a deleveraging campaign to systemically reorganize its economy in 2016, Beijing has been nibbling away at its zombie problem through bankruptcies. Between 2015 and 2018, the number of enterprise insolvency cases, involving firms with all forms of ownership, that were accepted and adjudicated annually by the Chinese legal system grew roughly fivefold (see figure 1). The burgeoning cases can be partly attributed to the establishment of 98 specialized bankruptcy courts by the end of 2018.[2] 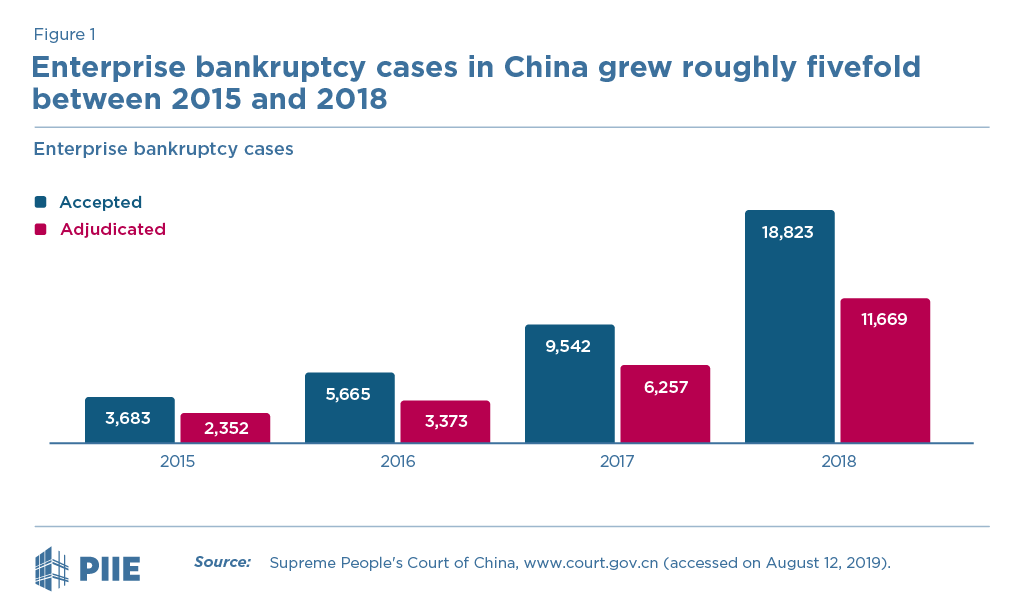 While it is good news that China is finally using the bankruptcy law to facilitate its deleveraging campaign, it is unclear how much state firms contributed to the rise in bankruptcies, as the number of money-losing state firms was also on the rise, albeit at a slower pace (see figure 2). According to the Ministry of Finance, nearly two-fifths of all state firms in China were incurring losses totaling RMB1.4 trillion ($199 billion) by the end of 2017.[3] Clearly, more state firms that are chronic money losers need to exit through bankruptcy.

Beijing has recently pledged to mitigate government interventions in state firm bankruptcies—a most encouraging sign that Premier Li Keqiang’s promise this year to address the problem of zombie enterprises is being taken seriously. A detailed plan to achieve this goal, presented in July 2019, states that “for state-owned enterprises that already meet the criteria for bankruptcy, all related parties must not hinder their exit [from the market] through any means, in order to avoid creating any new ‘zombie companies,’” which points out the fact that local government intervention has contributed to blocking local state firm bankruptcies. The Supreme People’s Court in 2018 also made clear that zombie firms not worth restructuring ought to be removed from the market resolutely through liquidation. But what matters is whether these words translate into practice.

Disconnect Between Law and Practice

Under the Enterprise Bankruptcy Law of China, which took effect in 2007, a debtor firm or creditors can file a bankruptcy petition if the debtor firm’s balance sheet is insufficient to repay debt when due.[4] In practice, however, bankruptcy of loss-making enterprises, especially state-owned enterprises, was rare prior to the deleveraging campaign. At the end of 2015, over 62,000 state-owned firms, many of which were zombies, were incurring RMB1.3 trillion ($183 billion) in losses (see figure 2). However, only 3,683 bankruptcy cases, filed by companies of different ownership forms, were accepted by China’s legal system in 2015, in which 2,352 were adjudicated, including 366 reorganizations (see figure 1).[5]

Several factors have been preventing bankruptcies from being carried out—notably the power of banks, local governments, and the political connections of the zombie enterprises themselves, enabling them to avoid the pain of shutting down. The insolvent state firms would rather live on the continuous support of the government and creditors than liquidating assets to repay debt. The local banks have kept extending credit to nonviable firms to avoid writing down loans, which would erode their capital. At the same time, local governments, concerned about layoffs and losing fiscal revenues, have often subsidized insolvent local state firms to keep them afloat while pressuring local banks to continue to lend to the zombie firms.

The Chinese government’s cautious approach towards using bankruptcy as a way of resolving the zombie problem was made obvious during the 2015 Central Economic Work Conference where the leaders decided on promoting mergers and acquisitions while minimizing bankruptcy liquidation. Since then, the number of completed domestic merger-and-acquisition deals, including all state-orchestrated mergers among state firms, soared from a mere 2,938 in 2016 to 7,234 in 2018 (see figure 3). As a result, state firms grew bigger in assets, but their profitability on average remained extremely low. 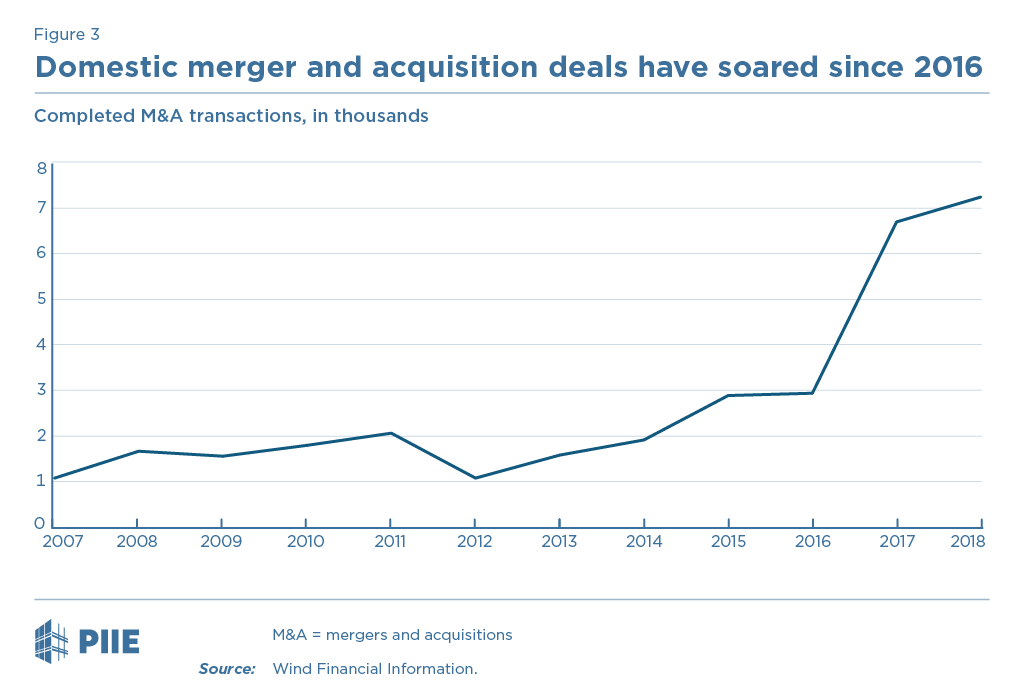 Watch Out for Bumpy Patches Ahead

Allowing more zombie state firms to go bankrupt would yield benefits in the long run, even if the short-term pain is real. Such a reform would level the playing field for firms of all ownership forms and eventually put China back on a higher growth track, as the economy would benefit from more efficiently allocated resources.

China should also allow more nonviable state firms to default on their bonds, as such defaults would help break the implicit state guarantee for state firm liabilities, which would force the state-owned sector to adhere to budget constraints and exercise greater credit discipline.

Meanwhile, in order to accelerate the bankruptcy process, China should make banks recognize losses and allow greater bad-loan write-offs. Some banks might need to supplement their capital to maintain capital levels above the regulatory minimums.

Finally, to address the problem of layoffs when more Chinese firms go belly up, the state should allocate budget resources to retrain the laid-off employees and provide them with essential social welfare. Admittedly, helping unemployed workers could be a serious challenge given China’s fiscal restraints. But an investment in retraining and helping workers makes sense in China, just as it does everywhere else.

1.The State Council of China identifies zombies as firms that have incurred losses for three consecutive years, while the IMF study considers them as firms incurring persistent losses and with estimated interest payment costs below market lending rates. Nicholas R. Lardy argued in his book The State Strikes Back: The End of Economic Reform in China? (Peterson Institute for International Economics, 2019) that the IMF study likely understated the share of zombie firms and their debt (see pp. 113-14).

2. See Li, Bo and Ponticelli, Jacopo, Going Bankrupt in China (March 4, 2019), available at SSRN. This study has a few interesting findings, including (1) court specialization has led to an increase in both bankruptcy filings and share of filings by state-owned firms, (2) bankruptcy cases filed in specialized courts have shorter resolution time compared with the cases filed in civil courts, and (3) the cities that introduced specialized courts have experienced a decrease in the share of zombie firms relative to cities where bankruptcy cases are still handled by civil courts.

3. The exchange rate used to convert renminbi to US dollars in this post is as of August 22, 2019.

5. The actual number of firms involved in bankruptcies might be somewhat larger than the number of bankruptcy cases reported by the Supreme People’s Court of China, because multiple firms that belong to the same group are sometimes involved in a single case.