The Chinese financial system is burdened by excessive debts, a condition that the Chinese government has labeled as one of its "three critical battles" to sustain economic growth and stability.[1] To lower the ratio of nonfinancial sector debt to GDP, estimated at 254 percent at the end of 2018 by the Bank for International Settlements, the government must undertake systemic deleveraging. Its strategy is to slow the growth of new lending and reduce the stock of existing loans through multiple approaches that include the debt-to-equity swap program.[2] The latest data show that China's implementation of the debt-to-equity swap program has improved, but the program has done little to rein in the debt dragon. China is handicapped by its policy of not letting market forces play a truly decisive role in pricing the swaps. Lacking such a capability, the swap program may be unable to win its chosen battle.

China's debt-to-equity swap program started in 2016. The effort might seem like a déjà vu to many long-time China observers. The last time China experimented with debt-to-equity swaps to clean up the massive bad loans on the balance sheets of its state-owned banks was in the late 1990s. In 1999, four asset management companies (AMCs), in tandem with the four largest state-owned banks (often referred to as the "Big Four" banks), were created to experiment with such swaps.[3] The four AMCs—which were financed completely by the state through capital injection by the Ministry of Finance, the central bank's relending facility, and special government bond issuance—ended up acquiring roughly RMB1.4 trillion (US$169 billion)[4] of nonperforming loans primarily from the Big Four banks. That  amount was equivalent to nearly 20 percent of China's GDP in the same year. Because the AMCs acquired the nonperforming loans at face value, the swap program prevented the largest four commercial banks from defaulting on their financial obligations to millions of households in China.

The current debt-to-equity swap program is different from 20 years ago in at least four aspects. First, the program has a mandate to contribute to the nation's deleveraging campaign. Second, all categories of loans—not only nonperforming but also performing and special mention loans—are eligible to be swapped for equity in target companies.[5] Third, zombie firms are not allowed to participate in the swap program this time, but indebted companies that still have some growth potential in strategic emerging industries and national defense-related sectors are encouraged to participate.[6] Finally, a diverse group of nonbank financial institutions—albeit centered around few key state players—are charged with implementing the swap program this time.

In the first two years since the swap program was launched, little progress has been made in expanding the scale of the program and improving the execution of the signed swaps. By the end of 2017, only 14 percent of signed swaps by value had been executed (see figure), which was almost a "rounding error" compared with China's corporate loan balance of RMB132 trillion (US$19.11 trillion).[7] In addition,  the majority of swap projects were with state-owned enterprises. Private enterprises were largely bystanders in this period.

The latest data released by the State Council show some improvements in the swap program. The program has expanded in scale since 2017, and by the end of April 2019, 40 percent of the signed swaps by value had been executed, a leap forward from 14 percent at the end of 2017 (see figure). Meanwhile, more private firms are getting involved in the program—either as target companies or as equity investors in some heavily indebted state-owned enterprises. The share of executed swaps involving private enterprises —though still too small—was 6.5 percent of all signed swap contracts (24 of the 367 signed contracts) in April 2019, compared with 1.2 percent (1 of 81 signed contracts) at the end of September 2017. 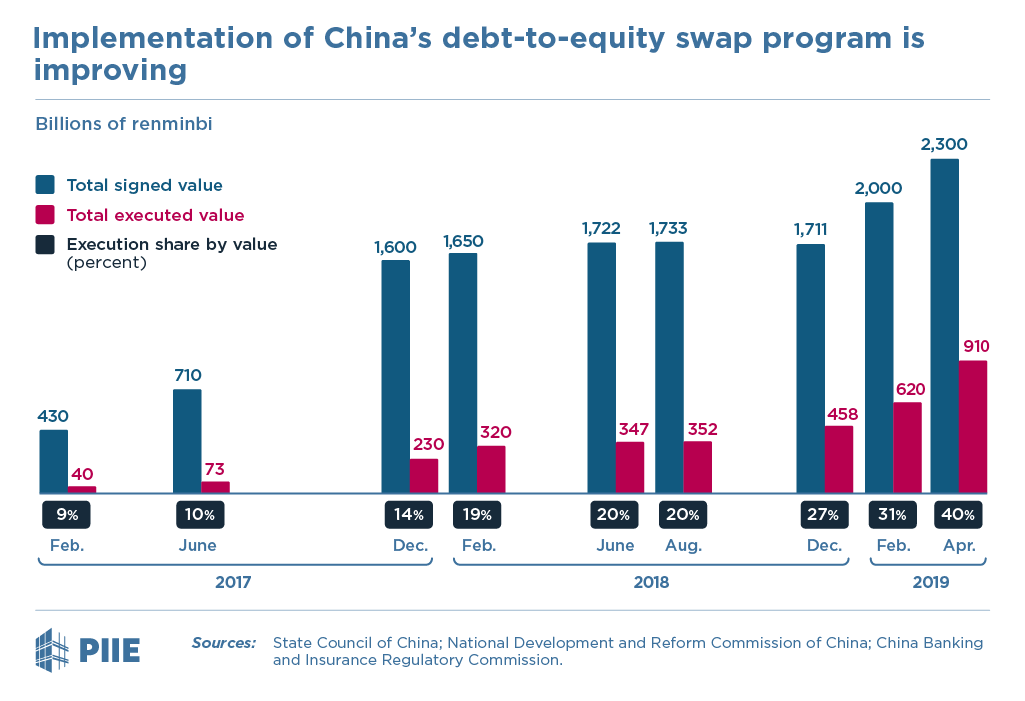 But in spite of improved execution, the debt-to-equity swap program has done little to cut China's high leverage. Though the executed value has gone up rapidly over the past three years, its overall size is still extremely limited. The RMB910 billion (US$131.75 billion) in the executed value of debt-to-equity swaps, compared with RMB143.1 trillion (US$20.72 trillion) in nonfinancial corporate loans outstanding by the end of April 2019, is still minuscule, even less than the RMB1.02 trillion (US$147.68 billion) increase in loan balance in April alone.[8]

The highly uncertain prospects of repayment have prevented many private investors from getting involved in the swaps, and without key state players, the program is almost doomed to fail. Notwithstanding the government's stated market orientation as the core in carrying out the debt-to-equity swap program, the recent improvement in program execution would not have been possible without the participation of the five largest financial asset investment companies (FAICs) recently set up by the nation's five largest state-owned banks (the Big Four and Bank of Communications, or the "Big Five"). Multiple joint stock commercial banks and city commercial banks have also set up their own FAICs to join the swap program and more FAICs are to come. These FAICs are charged with implementing the swap program along with the four large state-owned AMCs created in 1999, over 50 local state-owned AMCs throughout the country, and a few state-owned insurance companies.

According to the State Council, the five largest FAICs had executed nearly 70 percent of the signed swap projects (254 of the 367 signed swaps) and 44 percent of the signed swap value (RMB400 billion of the total signed value of RMB910 billion) by the end of April 2019, of which around RMB250 billion (US$36.19 billion) was raised from private equity and government-guided funds and local governments and the rest from the Big Five banks' own balance sheets. In July 2018, the People's Bank of China lowered the required reserve ratio for the Big Five banks and 12 joint stock banks by 50 basis points, releasing RMB500 billion (US$72.36 billion) in liquidity, to provide exclusive support to the debt-to-equity swap program. The Big Five subsequently used a part of the capital freed up from the targeted required reserve ratio cut to finance the swap projects implemented by their FAICs. Thanks to the central bank's targeted reserve rate cut, the Big Five were able to fund their FAICs without sacrificing their own capital sufficiency.

As Nicholas R. Lardy discusses in his 2019 book, The State Strikes Back: The End of Economic Reform in China?, the pricing of swaps is a key challenge preventing the debt-to-equity swap program from expanding more quickly. Market forces—if well-functioning—should enable swaps to be priced in a fair manner, acceptable to both debtors and creditors. But in the case of China's debt-to-equity swap market, information asymmetry, lack of key pricing infrastructure, and too much state intervention have significantly restricted the role of market forces in determining fair prices of the swaps, thus turning away many prospective investors.

In July 2018, the Beijing Financial Assets Exchange was charged with launching a reporting platform for debt-to-equity swap projects.[9] Earlier in June 2019, the vice chairman of the National Development and Reform Commission (NDRC), Lian Weiliang, stressed at a press briefing that such platforms would be expanded to tackle information asymmetry. It is not clear how the NDRC will approach the expansion and how effective it will be on swap pricing. But one thing is clear: Without a market-oriented pricing mechanism, it will be difficult to attract more nonstate capital to join the program.

Internet conglomerate Alibaba's experience in auctioning off billions of dollars in nonperforming financial assets through its popular retail platform, Taobao, might inspire new thinking on how to tackle information asymmetry in pricing debt-to-equity swaps. Online platforms such as Taobao could have many advantages compared with state-directed financial asset exchanges: greater transparency, a bigger pool of potential buyers, and presumably fairer prices. Using such online platforms might attract more private investors to participate in the swap program.

1. The "three critical battles" refers to the battles against major risks in the Chinese economy, poverty, and environmental pollution.

4. The exchange rate used to convert renminbi to US dollars here is as of end 1999 from the National Bureau of Statistics of China.

5. See the National Development and Reform Commission's (NDRC) Notice on the Specific Policy Issues Concerning the Implementation of the Market-Oriented Debt-to-Equity Swaps of Banks promulgated in January 2018.

7. Nicholas R. Lardy, The State Strikes Back: The End of Economic Reform in China?(Peterson Institute for International Economics, 2019), p. 93. The exchange rate used to convert renminbi to US dollars hereafter in this post is as of June 18, 2019.

8. See the April 2019 Financial Statistics Report by the People's Bank of China.