Migrant workers, indispensable to China’s economic achievements, have become the most vulnerable group suffering under the COVID-19 economic downturn. They need help from expanded social programs to sustain their livelihoods. Without that assistance, their weak condition will drag China’s recovery.

More than 290 million workers migrated from the countryside to work in cities throughout China as of the end of 2019, more than one-fifth of the country’s population.[1] This workforce just suffered its worst quarter in more than a decade. The official average unemployment rate of 5.8 percent in the first quarter has undercounted migrant unemployment because the monthly unemployment survey conducted by the National Bureau of Statistics only includes migrant workers living in urban areas. Those who lost their urban jobs and returned to the countryside are not included.

The service sector, which generates more than half of China’s GDP, has replaced manufacturing and construction as the largest employer of migrant workers in recent years. But services output in the first quarter contracted by an unprecedented 5.2 percent, as a result of widespread lockdown and quarantine. Retail and wholesale establishments, hotels, and restaurants—the most labor intensive service industries that employed a total of 55 million migrant workers in 2019—saw the deepest output decline in the first quarter: 18 percent for retail and wholesale and 35 percent for hotel and restaurant outlets.

More and more migrants in services are women and older workers. In 2009–19, nearly 22 million women joined China’s migrant workforce, while the average age of migrant workers has increased from 34 in 2008 to 41 in 2019, and a quarter of the workforce is now over 50.[2] Women and older workers are generally more vulnerable to exploitation and layoffs, and their needs should be addressed with more focused policy support.

Social insurance covers too few Chinese workers generally, but the latest data available indicates that in 2017, migrant workers were enrolled in these programs at a lower rate than other workers—for example, 17 percent as opposed to 44 percent of the urban labor force in the unemployment insurance program (figure 1). The same imbalance exists in pension, health care, and workers’ compensation. China’s household registration (hukou) system restricts migrant workers without an urban hukou from joining urban social programs unless they are formally employed. But in 2016, only 35.1 percent of migrant workers signed formal employment contracts with their employers, a decline from 42.8 percent in 2009.[3] 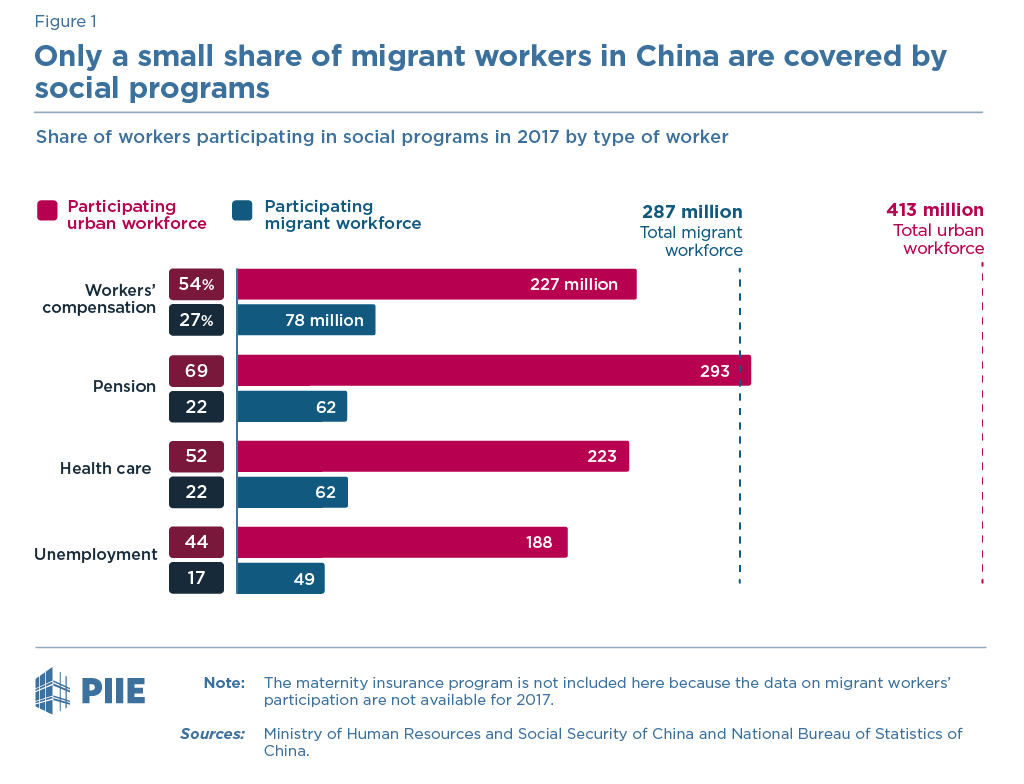 Wages and wage growth rates for migrant workers are also lower than for those employed by urban private companies (figure 2). That wage difference in 2018 was RMB4,923 (US$694)[4] per year. As a result, their savings are probably also smaller, leaving them even more vulnerable in the current crisis.

China can do more to help those suffering from unemployment through temporary cash subsidies. In the first quarter, the government gave out a one-time only subsidy of RMB410 million (US$57.8 million) to 67,000 migrant workers, which translates into RMB2,040 (US$288) per person per month. But the program was too limited in both scale and coverage to provide meaningful assistance to the many migrant workers in dire need. 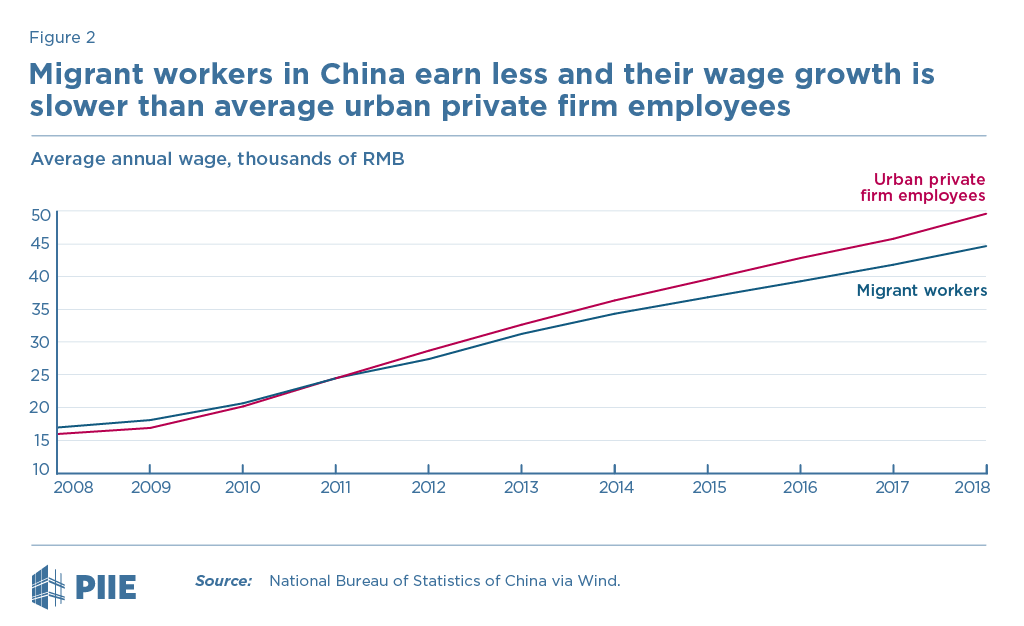 1. Migrant workers are officially defined as those with a rural household registration, or hukou, who work in nonagricultural sectors in the countryside or have migrated and are employed outside their native county for more than six months. See Nicholas R. Lardy, Markets Over Mao: The Rise of Private Business in China (Peterson Institute for International Economics, 2014), pp. 17-19.

2. Data in this paragraph are from the National Bureau of Statistics of China, Report on the 2019 National Migrant Worker Investigating Survey, April 30, 2020.