Which countries are in the CPTPP and RCEP trade agreements and which want in? 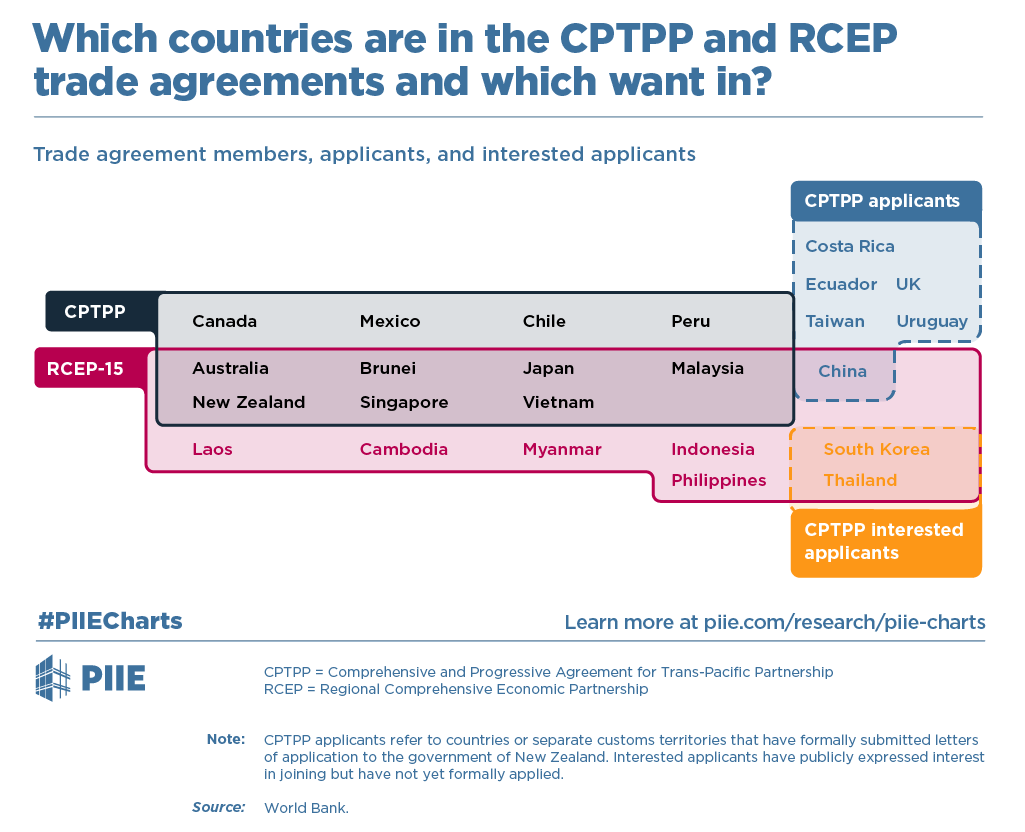 The Comprehensive and Progressive Agreement for Trans-Pacific Partnership (CPTPP) is a free trade agreement, signed by 11 Asia-Pacific countries representing 13 percent of global GDP, that lowers barriers to trade in goods and services between member countries. Members pledged to eliminate almost all tariffs and import charges on each other's products and accepted common obligations on food regulations, environmental protections, the digital economy, investment, labor, and financial services, among others.

Since coming into effect in December 2018, several countries have applied or shown interest in joining the CPTPP. However, CPTPP accession is a long and complicated application process. Entry to the agreement requires a consensus among existing signatories, and applicants must work with every member to satisfy concerns.

Seven CPTPP signatories are also members of the Regional Comprehensive Economic Partnership (RCEP) that came into force in January 2022. Currently, RCEP is the world's largest free trade agreement (FTA), encompassing 15 countries that account for 31 percent of global GDP. RCEP members are also required to phase out tariffs on signatories' goods, but the requirements are not as comprehensive as under the CPTPP. Trade liberalization is incremental and tariffs on sensitive imports are left intact. Unlike the CPTPP, the RCEP does not include disciplines on support for state-owned enterprises (SOEs) or provisions on labor issues and environmental protections, but its flexible origin rules encourage deeper supply chain integration across the 15 members.

The agreements confront US policymakers with some awkward choices: stay out of the Asia-Pacific megadeals and face increasing trade discrimination in important and growing markets while China deepens its trade and investment ties in the region, or reengage with CPTPP countries and/or develop new and more narrowly focused trade accords with key allies in the region in areas such as digital trade and trade-related climate issues. By beginning negotiations on an Indo-Pacific Economic Framework for Prosperity (IPEF), the Biden administration has chosen the second option. Meanwhile, US trading partners, including IPEF participants, are seeking CPTPP membership despite the US absence.

China submitted its CPTPP application on September 16, 2021, after two years of signaling its interest in joining the pact. But the gap between Chinese policies and CPTPP standards is large and may be unbridgeable in areas such as labor, SOEs, and digital trade. Without substantial changes in Chinese policies, long transition periods for implementing CPTPP reforms, or exemptions from specific provisions, it is hard to see how China's application would be approved.

The Costa Rican government announced its intention to join the CPTPP on August 10, 2022. The United States is Costa Rica’s main trading partner but officials hope that CPTPP membership will complement its existing FTAs, deepen trade links with fast-growing Asian economies, and attract new investment in Costa Rican industry and agriculture.

As part of a strategy to reduce its reliance on oil and diversify its economy, Ecuador is seeking to expand its trade with larger economies and formally applied to join the CPTPP at the end of 2021. The agreement represents an opportunity for Ecuador to grow its banana and shrimp exports, but it will face challenges meeting the agreement’s stringent trade obligations.

Less than a week after China submitted its bid for CPTPP membership, Taiwan filed its application under the name "the Separate Customs Territory of Taiwan, Penghu, Kinmen, and Matsu." Taiwan's accession will be a challenge with China insisting on joining first (as it did in WTO accession two decades ago) and without the United States—its most influential international supporter—among the agreement's signatories.

South Korea signaled on December 13, 2021, it will step up its efforts to join the CPTPP. Korean officials had wavered about applying for membership because longstanding bilateral trade and political frictions raised concerns that Japan would demand sensitive trade reforms as the price of entry. Those concerns seem to have faded in light of China’s decision to join the CPTPP, and Korea’s application is expected once domestic political consultations have been completed.

In December 2021, South Korea also ratified the RCEP, which entered into force for Korea in February 2022.

Motivated by fears of losing trade and investment opportunities to Southeast Asian competitors included in the agreement, Thailand has long expressed interest in joining the CPTPP but hesitated because of public resistance to the trade reforms required by the high-standard agreement. However, Thailand has signed the RCEP and now seems amenable to broader trade liberalization.

* member of both CPTPP and RCEP

This PIIE Chart is based on research from Jeffrey J. Schott, China's CPTPP bid puts Biden on the spot and RCEP is not enough: South Korea also needs to join the CPTPP.