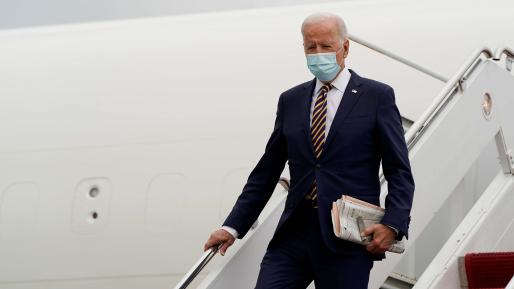 China's application to join the Comprehensive and Progressive Agreement for Trans-Pacific Partnership (CPTPP) was not a surprise to those following the signals out of Beijing. For two years, President Xi Jinping has delivered speeches indicating his intentions to join the trade pact that President Donald Trump walked away from in the beginning of his administration in 2017. But don't expect trade negotiations to progress anytime soon. Chinese accession talks will be time-consuming and contentious, and that is if none of the 11 CPTPP members, including Australia and Japan, vetoes the exercise from the start.

China's move confronts President Joseph R. Biden Jr. with some urgent decisions. In response to China's accession application, Biden should reverse Trump's decision and rejoin the trade accord, seeking upgrades in the pact to justify such a move. It would be unthinkable for Washington to sit on the sidelines and watch China take the lead in the Asia-Pacific region.

Judging from the CPTPP text, China has some work to do to join the pact. While China has upgraded its foreign investment law and regulations, and improved enforcement of intellectual property laws, the gap between Chinese policies and CPTPP standards is still large and perhaps unbridgeable in areas such as labor, state-owned enterprises (SOEs), and digital trade. Unless CPTPP members accord China long transition periods to conform its domestic practices with the pact's obligations, or grant exemptions from specific CPTPP provisions, it is hard to see how China's membership application could be approved.

Chinese officials likely know the weaknesses in their application, so why would they go forward and ask to accede at this time? China could be counting on the other CPTPP partners to waive or water down some of the admission requirements. But China's application is also a defensive strategy against CPTPP expansion to include Taiwan. That issue was potentially brought to a head on September 22, when Taiwan also formally applied to join the CPTPP.

In the past month, Japanese officials have discussed CPTPP with Taiwan, breaking a taboo in the region—most countries have not talked about Taiwan's prospective participation, even though their accession procedures accommodate applications from both countries and separate customs territories (e.g., Hong Kong and Taiwan), for fear of Chinese retribution. Members of the US Congress as well as the Biden administration are facing increasing political demands to strengthen support of Taiwan in the face of increasing Chinese military activity in the South China Sea. US officials reopened talks under the Trade and Investment Framework Agreement (TIFA) with Taiwan; Chinese officials clearly do not want those consultations to graduate into formal bilateral trade negotiations. This complex issue will be explored in a subsequent blog posting.

The Biden administration is under conflicting pressures over what to do about an expanding trade pact that would leave the United States out. On the one hand, US business groups as well as several members of Congress are pressing the White House to revisit US policy toward the CPTPP. On the other hand, faced with likely resistance among Democrats, the administration has continued to repeat campaign talking points that Asia-Pacific trade negotiations should wait until domestic economic reforms are implemented to improve US competitiveness. Chinese officials probably concluded that the United States would stay on the sidelines while they applied for CPTPP membership. Without US officials at the table, China will have more leverage in negotiating the terms of accession and market access schedules with the existing CPTPP members.

The Chinese application, which includes supporting documentation on how Chinese policies comply with CPTPP obligations or how they plan to reform them to close the gap, will now be reviewed by the CPTPP members (see figure 1). The application requires approval by consensus before an accession working group (AWG) is established to conduct the accession negotiations. It is unclear whether the three countries that have not yet ratified the accord (Brunei, Chile, and Malaysia) can participate and/or block the application or participate in the accession talks. Malaysia already has welcomed China's application, likely hoping that flexibility on labor and SOEs accorded to China would be extended to it, easing current problems in its domestic CPTPP ratification debate. 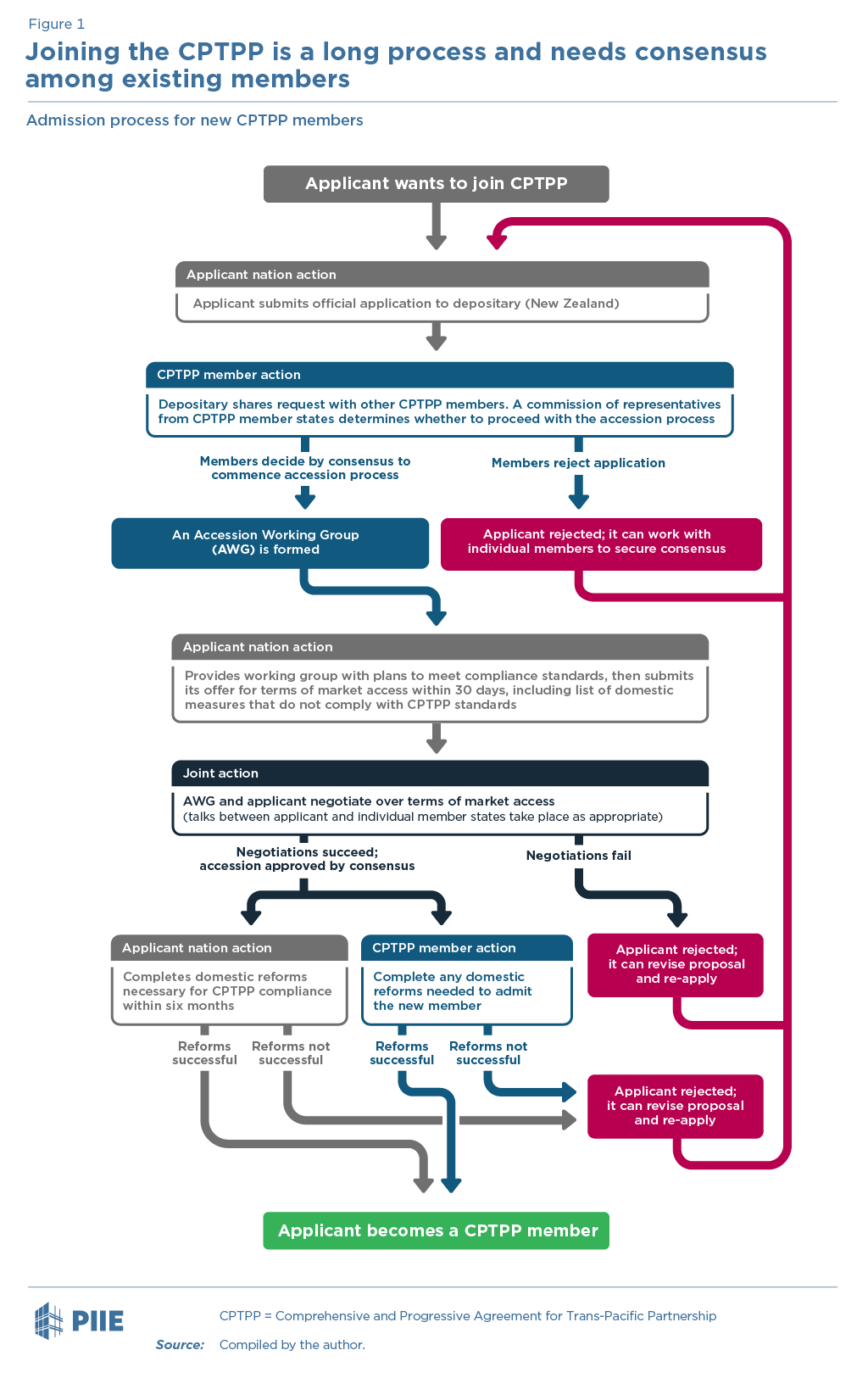 At the first AWG meeting, China would have to submit the equivalent of a Statement of Administrative Action, detailing what it has done or needs to do to comply with CPTPP obligations. Thirty days later, China would have to present its market access offer, including a list of measures for which they seek full or partial exemption from the core CPTPP obligations. Negotiations would start only if the parties think the offer is good enough.

According to established CPTPP standards, China's market access offer "must deliver commercially-meaningful market access for each Party in a well-balanced outcome." The language suggests that the commitments should be as comprehensive as those undertaken by the original CPTPP signatories. But CPTPP national schedules did allow some special treatment to enhance political support for ratification of the pact in national legislatures. There are thus precedents in addressing problem areas for Chinese compliance, though the previous exceptions were relatively small scale compared to the economic impact of deferring or exempting China from specific obligations.[1] That is the small hole that Chinese negotiators hope to exploit to gain CPTPP approval.

Would any CPTPP member say "no" to China?

Would any of the 11 CPTPP members reject China's membership application, for cause or otherwise? Most have substantial trade ties with China, including bilateral and/or regional free trade agreements (FTAs) providing their exporters preferential treatment in the Chinese market (all except Mexico and Canada). For 6 of the 11 CPTPP countries, China accounts for more than 20 percent of bilateral merchandise trade (see figure 2). Only Brunei, Canada, and Mexico are less dependent on trade with China (under 10 percent of their total trade). It is hard to reject membership for a major trading partner; more likely, concerns about Chinese compliance would prolong the negotiating process. 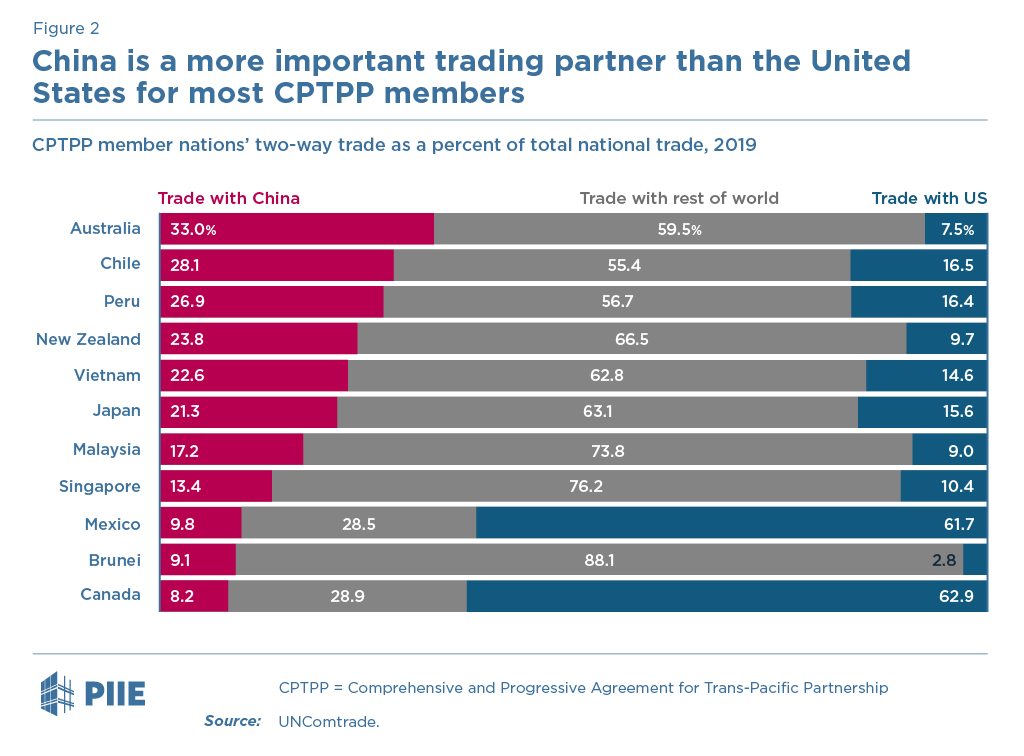 On the other hand, China's bilateral relationships with CPTPP members carry some heavy baggage. Australia has been targeted by Chinese import restrictions seemingly in response to an array of Canberra's policies and statements. Japan continues to chafe over Chinese consumer boycotts and trade and investment restrictions on Japanese goods, particularly autos. And Canada, despite its bilateral investment pact with China, failed to launch bilateral free trade talks with China largely for foreign policy reasons. The two countries are in a bitter disagreement over the extradition case involving Huawei executive Meng Wanzhou, and China's subsequent arrest and incarceration of two Canadian business executives.

Some have suggested that the United States should try to coerce Canada and Mexico to block China's application by invoking Article 32:10 of the United States–Mexico–Canada Agreement (USMCA). But the USMCA provision, commonly and inaccurately labeled a poison pill by politicians and trade pundits alike, simply requires any USMCA country to consult in advance with the other members before engaging in FTA talks with a nonmarket economy (e.g., China). If any country considers that its trade benefits from the USMCA would be impaired by the FTA with China, Article 32:10 allows it to withdraw from the pact with six months' notice. Of course, each member can leave for any reason at all after six months under the pact's general withdrawal clause, so the 32:10 excuse is redundant. In the end, US officials are unlikely to exit the USMCA and throw away the new labor obligations and enforcement procedures that are the hallmark of the Biden administration trade policy.

On the other hand, Mexico may have its own reasons to challenge Chinese membership. It faces domestic competition from Chinese manufacturing imports and has few exports that could be subject to Chinese retaliation. Blocking or prolonging accession negotiations would also earn plaudits from its North American neighbor.

China clearly does not expect its application to be rejected out of hand, even if negotiations drag on for a while. China appears to be betting that it can meet most CPTPP conditions while avoiding or delaying compliance in key areas, especially on the pact's standards on SOEs, data, and labor.

All these developments add pressure on the Biden administration to get back into the game to preserve the high-standard rules that US negotiators helped negotiate five years ago. US leverage is obviously limited if it stands to the side. Yet the United States could return to the CPTPP if members were open to augmenting the terms of the current pact, potentially giving Biden an excuse to rejoin. Adding a new chapter on trade and climate is both feasible and desirable. Updates to the digital economy chapter a la USMCA will be harder but doable. Getting stronger labor enforcement provisions in the CPTPP probably is beyond the pale (though US efforts still could yield specific bilateral commitments on labor practices from Vietnam and Malaysia).

The United States needs to rejoin its Asia-Pacific partners and not sit on the sidelines as a new economic order is established with China at its center. The upcoming Asia-Pacific Economic Cooperation forum in November in New Zealand would be a fitting venue for President Biden to announce America's return to the CPTPP and reassert US leadership in the region.

1. For example, CPTPP members were flexible in requirements on certain labor and SOE obligations undertaken by Vietnam and Malaysia. Some observers suggest they will do the same for China, which seems implausible given China's size alone.

Which countries are in the CPTPP and RCEP trade agreements and which want in?