The United States is negotiating two major free trade agreements (FTAs): the Trans-Pacific Partnership (TPP), which involves 10 other countries, and the Transatlantic Trade and Investment Partnership (TTIP) between the United States and the European Union. Both negotiations have been held up by stumbling blocks, but there is cautious but growing optimism about the prospects for a TPP deal in 2015.

Even so, ratification can be a tortuous process. The chart below shows the time consumed, first, in negotiating a trade deal, starting from the first round of negotiations to the signing, and second, between the signing and ratification. Some trade pacts have taken a year or less from FTA signature to entry into force, but recent FTAs have experienced delays. Since 2006, the average time lag between signing and implementing US FTAs was almost 50 months. The Korea-US FTA took more than four and a half years to ratify and implement after the initial signature.

The lengthier time lags reflect many factors, including the need to approve implementing legislation and allow for internal debate among US trading partners, as was evident with the Colombia, Panama, and Oman trade pacts. 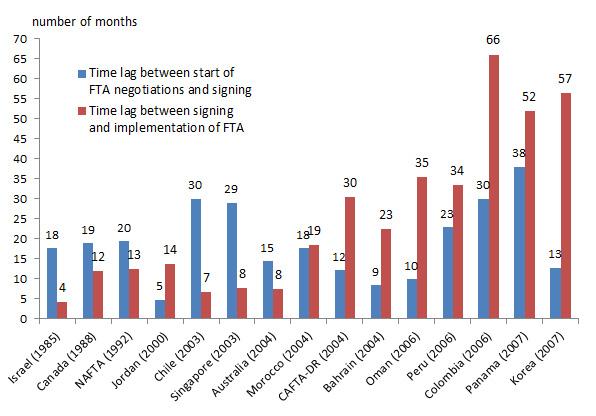 CAFTA-DR = Dominican Republic–Central America–United States Free Trade Agreement;
NAFTA = North American Free Trade Agreement
Note: Year in parenthesis indicates when the agreement was signed. Time lag figures are rounded to the nearest month. The time lags for CAFTA-DR are the average for all six countries involved in the talks.
Sources: Office of the US Trade Representative and authors' calculations.

That said, negotiators are aware of this record and are trying to resolve contentious issues that could impede ratification in the final stages of the talks. All TPP countries have an interest in avoiding KORUS-like delays in Congress when TPP implementation goes forward. With the exception of the US-Jordan FTA, these timelines all reflect negotiations concluded with Trade Promotion Authority (TPA). TPA is the legislation that defines US negotiating objectives and provides US trade negotiators with authority to conclude trade pacts and allow for an up-or-down vote in Congress without amendments. TPA serves as a crucial signal to US trading partners of US commitment and will undoubtedly smooth the path for TPP ratification.

President Obama's remarks at the Business Roundtable were a positive public signal that the administration will make it a priority to work with congressional leaders in early 2015 to finally get TPA legislation after a rocky road since the draft bill was proposed back in January 2014.1 Signing a US trade pact with 11 countries without TPA would not only be unprecedented, but a TPP ratification process without TPA would only make the red bars climb even higher.