Industries’ Contribution to Emissions in China

Most cell phones and computers (70 and 90 percent of the world total in 2011, respectively) are produced in China. But does China’s emphasis on manufacturing mean that factories, “the production side of the economy,” contribute more to pollution than other sources of emissions? Industrial production and construction account for 31% of China’s 8.2 gigatonnes (or 8.2 trillion kilograms) of CO2 emissions. This is unusually high, only 9 countries surveyed by the International Energy Agency have manufacturing sectors that emit more than 30% of a countries’ total CO2 emissions.  This chart shows other major economies pollute relatively less through factories and more through the remaining sectors (transportation, electricity, individual energy use, and other.) According to PIIE research, the transportation sector is projected to grow faster than the global economy, so its role as a major source of emissions will increase in the absence of any major technological breakthroughs. 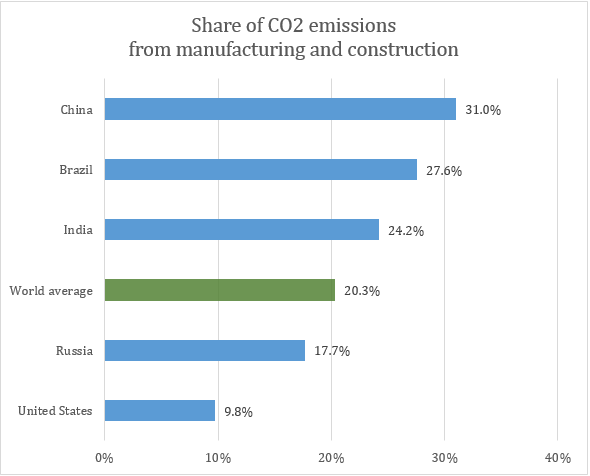 About 42% of China's GDP comes from industry with the comparable figure in the US about 20.5% - although the US economy is bigger, China still does more manufacturing than the US and more as a proportion of economic activity. So I am not really sure what conclusions you can draw from these numbers... and economic "rebalancing" in China will presumably take this number down.

World on the Move: The Changing Global Income Distribution and Its Implications for Consumption Patterns and Public Policies