This PIIE chart is the third in our series on international tax reform. Read also Some of the ways multinational companies reduce their tax bills and How a global minimum tax would deter profit shifting and one way it would not. 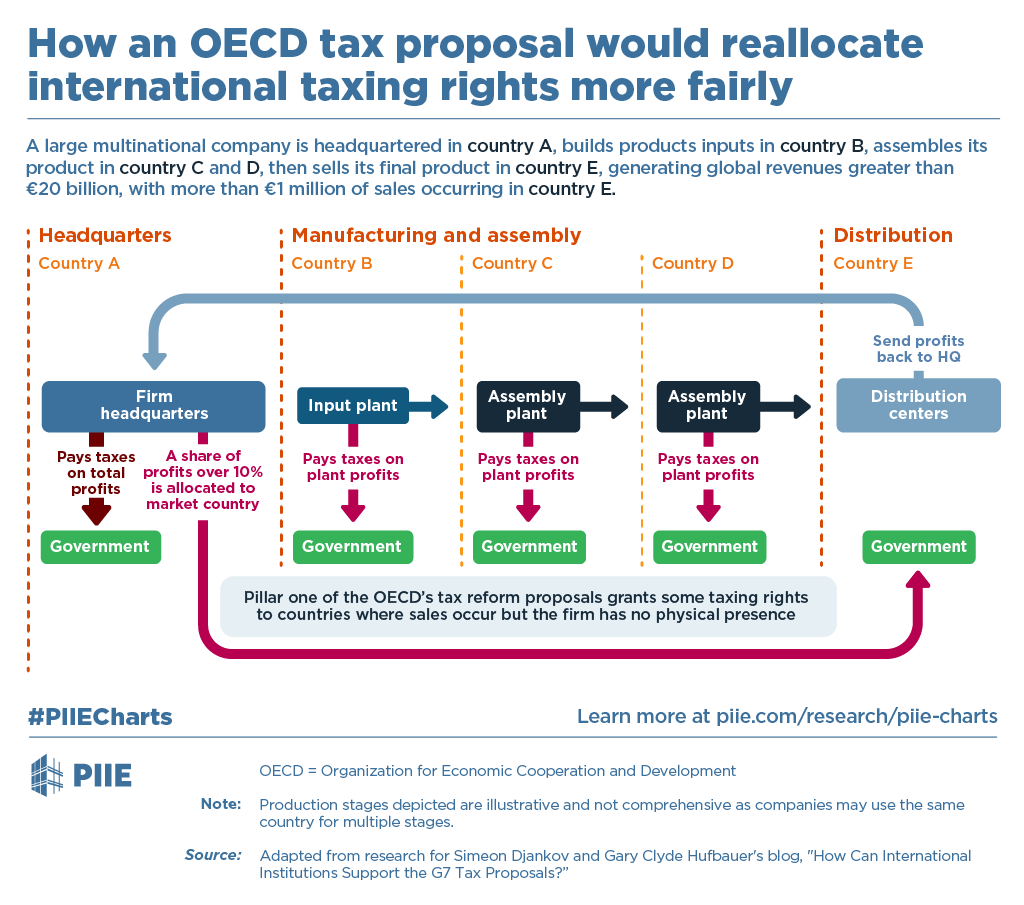 As of July 9, 132 countries have agreed to support the Organization for Economic Cooperation and Development’s (OECD) two tax reform proposals. The global minimum corporation tax (explained here) dominated international headlines, but a second part of the proposal that reallocates some taxation rights to countries where revenues are made has received less attention.

Under the current system (explained here), multinational firms are only taxed in locations where they have operations, not in the jurisdictions where they sell their products. For example, if an American company makes its products at a plant in Mexico, the company pays taxes to the Mexican government, and its total profits are taxed in the United States. If it then sells those products in France, it pays no taxes to the French government, because although it makes money from sales there, it does not maintain a physical presence in that country.

The OECD proposal, known as pillar one of the tax reforms, reallocates taxing rights to grant market countries—the jurisdictions where sales occur or users are based—some tax revenue. Companies with a global revenue of more than €20 billion (reduced to €10 billion after a review starting in the seventh year) and pre-tax profits that exceed 10 percent of costs would have a portion of their profit become eligible for market countries to tax. When applied to the previous example, the proposal would give the French government (the market country) a share of the tax collected on profits above the 10 percent threshold.

The revenue and profit thresholds mean only the largest and most profitable multinational firms will be affected and avoids placing a large compliance burden on smaller firms. The OECD estimates that 780 multinational firms record profits greater than 10 percent and could see a share of profits allocated to market jurisdictions.

Not every market country will receive taxing rights. At the July negotiations, countries decided that rights would only be allocated to market countries that generate at least €1 million in revenue for a firm. Smaller countries (with GDP lower than €40 billion) would receive an allocation if sales in their jurisdiction exceed €250,000.

To simplify the process and reduce the administrative burden imposed on firms, market countries would not set the tax rate applied to the firm’s residual profits. The tax allocation to market jurisdictions would be a predetermined share of residual profits—the exact percentage is still to be negotiated. The portion would be divided among the various jurisdictions based on the share of the residual revenue derived from each market, after deductions for money spent on marketing and distribution activities already subject to taxation.

It is still unclear who will be responsible for collecting and analyzing these annual data. Without an independent broker to verify and oversee reallocations, disputes between firms and national governments would be likely. The International Monetary Fund (IMF) has the necessary experience, expertise, and reach. It could act as an honest broker both in assessing which multinational firms meet the reallocation criteria and in distributing tax revenues to the market countries.

Even if members can agree on the details of the design and assign a broker to facilitate reallocation, the reforms may take years to be written into national tax laws and come into effect.

This PIIE Chart was adapted as a supplement to Simeon Djankov and Gary Clyde Hufbauer’s blog How Can International Institutions Support the G7 Tax Proposals?

The Beef over US Competitiveness