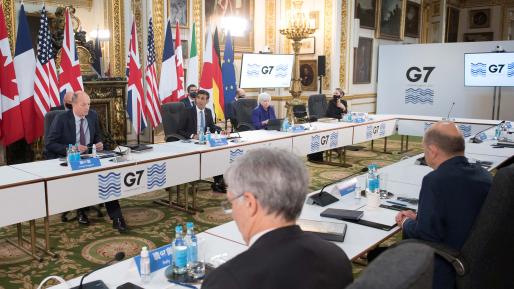 The quest backed by the Biden administration for a global minimum corporate tax rate and reallocation of taxable profits of large multinational corporations (MNCs) faces the next big test when finance ministers and central bank governors of the Group of Twenty (G20) economies meet in Venice on July 9-10.[1] Some 130 countries, including all G20 governments, have embraced the two proposals, which the Organization for Economic Cooperation and Development (OECD) developed over the last several years. A tough road lies ahead as national legislatures will need to rewrite tax laws and treaties. But international institutions can provide support for that effort.

In June, leaders of the Group of Seven (G7) countries, including President Joseph R. Biden Jr., adopted the goals of a global minimum corporate tax rate of 15 percent and reallocation of a fifth of profits above a 10 percent threshold (called Amount A in the OECD’s blueprint) earned by large MNCs to the country where goods and services are sold, rather than the country where they are produced.

History teaches that governments are jealous of their taxing powers. Within the United States, for example, state governments reject any suggestions that they should harmonize local tax bases or rates. Within the EU, national legislatures write the tax laws, and a common approach is limited to value added taxes (VATs), easing the movement of goods across borders. Given this experience, international institutions must tread lightly.

The OECD has been working since 2013 to develop the two proposals on global tax alignment. But OECD membership numbers only 38 countries, predominantly well-off nations, of which at least three (Estonia, Hungary, and Ireland) do not yet support the proposals. Going forward, international institutions with broader membership—like the IMF and the World Bank—seem better placed to advance international tax proposals.

The IMF has good expertise to illuminate important aspects of both proposals. The place to start is with the proposed 15 percent global minimum. Light can be shed on G7 tax practices that erode headline corporate tax rates below the 15 percent target. For example, the US Congress is now debating a 25 percent refundable tax credit for semiconductor investments. If enacted, this measure will likely reduce the effective tax rate below 15 percent for key firms. More troubling is the existence of multiple “passthrough” entities in the US tax code, such as Subchapter S corporations and limited liability companies (LLCs). These firms pay no corporate tax, yet account for about half of US business revenue. Whether their lighter tax burdens would run afoul of an international tax agreement is an open question at this stage.

Similar practices flourish in the tax codes of France, Italy, Germany, Japan, and the UK. Moreover, the UK is seeking to exclude financial firms from the G7 tax-sharing proposal, thereby protecting a key industry in the City of London. If the IMF shines light on such practices, that may prompt some G7 countries to clarify and reach agreement on their declared minimum.

Of course, when the G7 countries—including Canada, France, Germany, Italy, Japan, the UK, and the US—declared a 15 percent global minimum, they were mainly not thinking about their own tax credits, exemptions, or subsidies. Their aim was to change the policies of the 35 low-tax jurisdictions, predominantly tiny economies, listed here. Together, these jurisdictions have about 100 million citizens, a third of them in Uzbekistan. Several of these countries enacted low headline corporate rates to attract foreign direct investment from MNCs and a slice of global value chains, thereby creating high-wage local jobs. For these countries, implementing the 15 percent minimum rate may reverse the process and cost local jobs, as well as local personal tax and VAT revenues. The IMF could assess those outcomes, particularly for medium-sized countries like Bulgaria, Hungary, and Ireland.

Moreover, the US Treasury has proposed a “top-up” tax that would deprive US MNCs of tax benefits of locating activity in low-tax jurisdictions. If enacted, top-up taxes could have significant adverse effects on low-tax economies. Besides assessing such possibilities, the IMF could suggest alternative development and fiscal approaches for affected countries.

Turning to the reallocation proposal, if headquarter countries of the largest MNCs—essentially the G7 countries—will submit the tax and accounting returns of these firms to the IMF, then the Fund could act as the “honest broker” both in determining which MNCs are covered and in allocating some of these tax revenues to the place of sale. Without an honest broker to perform these services, multiple disputes and litigation between MNCs and countries are certain to become even more contentious than they would otherwise become.

Some of the low-tax jurisdictions that lose out from implementing the 15 percent global minimum may gain revenue from the reallocation. This is another area where analysis is needed beyond what the OECD has done to motivate these proposals. The OECD has estimated some aggregate numbers as to how much more tax might be collected from MNCs, but this analysis can be followed by further calculations on which countries would gain and which countries would lose, and how much in each case. However, even if G7 economies accept Amount Ain principle, it may take years for the reallocation to be written into national tax laws.

In the meantime, some low-tax countries may suffer not only from the net loss of tax revenue but also from the loss of MNC jobs. With that possibility in mind, the World Bank, together with the regional development banks, can explore the need for extending budget support to their severely affected members.

The Beef over US Competitiveness