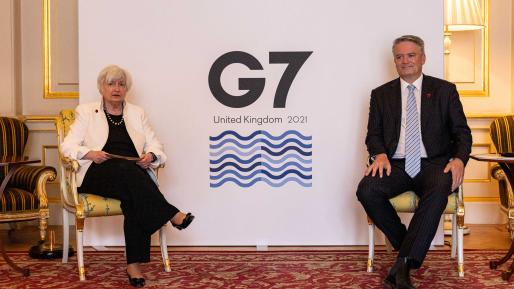 The long-running debate over how to prevent big multinational corporations from parking money in low-tax countries like Ireland and Bermuda has so far taken place among the world’s wealthiest democracies. Rich countries, after all, are those most eager to prevent the erosion of their own tax bases. That debate is about to enlarge and become even more challenging. Dozens of small countries that rely on tax policy for their growth strategies are lining up to have their say about the new rules emerging among rich countries.

The latest development in the effort to change global corporate tax rules came in June in London. It occurred in separate sessions where Treasury Secretary Janet Yellen and later President Joseph R. Biden Jr. joined with other Group of 7 (G7) leaders to establish an “historic” deal to redesign the world tax system. Their next task is to present the deal to the full complement of G20 countries in Venice in July. After that session the deal goes before the 135 countries that have participated from a distance in the tax talks sponsored by the Organization for Economic Cooperation and Development (OECD). There the deal may encounter rough patches with several dozen small countries heavily invested in the status quo.

The OECD’s “Inclusive Framework” project rests on two goals. The first (called “Pillar One”) calls for big corporations, especially the digital giants, to pay some form of tax to the countries where they market or sell their goods and services. “Pillar Two” would entail an agreement on a global minimum 15 percent corporate tax rate for corporations established in each country.  Pillar Two will not require any increase in G7 tax rates because they are already at 15 percent or higher. Nor will it require any of the G20 members to raise their basic corporate rates. But besides Ireland, well known for its 12.5 percent rate, there are another 34 low-tax and zero-tax jurisdictions outside the G7 and G20 – mostly small countries - at rates below 15 percent (see table). Nine additional jurisdictions, including Albania, Georgia, Lithuania and Serbia in Eastern Europe, Iraq, Kuwait and Oman in the Middle East, and Mauritius and the Maldives among small island states, have a 15 percent corporate tax rate.

But will an arrangement to reach a 15 percent minimum stick? When pressed to raise their corporate rates, some members of this low-tax group argue that they could lose the ability to attract firms, since they lack an equivalent array of resources, markets, or subsidies that large nations can offer.  If the low-tax countries are eventually forced into adopting the 15 percent minimum headline rate, they may adopt workarounds. They could, for example, legislate new deductions or tax credits as offsets.  If  all the G7 countries were to adopt “make-up” taxes on their multinational corporations (MNCs) that eliminate the advantage of moving intangible income (mainly royalties) to low-tax countries, it may not  make that much difference if some jurisdictions use other methods to lure corporations to do business within their borders or provide low-tax export platforms.

Pillar One would require some portion of the earnings of the largest multinationals—perhaps 100 firms, especially those known as GAFA (Google, Apple, Facebook, and Amazon)—to be taxed in the country where goods and services are sold. These taxes would be in lieu of taxes paid in the country where the goods and services are produced (the practice under current international tax rules).  Hammering out the main parameters, G7 finance ministers agreed that 20 percent of profits above a basic 10 percent rate of return should be allocated to the country of sales.  This is called Amount A. Thorny details remain to be agreed, not only among the G7 but also among the G20 and countries at large, as to the details of Amount A.  Which large corporations will be covered by the new rules?  What accounting standards will be used for the 10 percent threshold?  How will above-threshold digital profits be divided between countries?

The potential consequences for the low-tax countries listed in table 1 of a 15 percent global minimum tax rate coupled with reallocation of Amount A between countries are a matter of speculation. For a handful of low-tax countries that have acquired tax haven reputations, the 15 percent global minimum would probably entail the loss of vast book assets.  These legally parked assets yield small incidental tax revenues (stamp duties and the like) and create employment for skilled professionals such as financiers, lawyers, and accountants.  Jurisdictions affected by such losses would include the Bahamas, Barbados, Bermuda, British Virgin Islands, Cayman Islands, Cyprus, Guernsey, Isle of Man, and Jersey. These jurisdictions should, however, experience some revenue gains if they chose to tax the locally allocated share of Amount A from the largest MNCs. But such gains would probably be small, because resident populations are a minor share of world population.

A second group of low-tax countries have succeeded in attracting significant multinational corporation employment for production and service workers, partly through low corporate rates.  Countries in this category include Bahrain, Bulgaria, Hungary, Ireland, Liechtenstein, Macao Special Administrative Region of China, Montenegro, Northern Macedonia, Serbia, and the United Arab Emirates.  If they accept the minimum 15 percent rate, these countries will probably explore alternative fiscal incentives to retain local employment.  Again, the reallocation of Amount A may lead to some local revenue gains, but those gains might arrive later than the threat to local employment, simply because it will take time to work out Amount A details.

In sum, without G7 legislation that imposes “make-up” taxes on multinational corporations that book profits in low-tax countries, it will be difficult to persuade many of the countries listed in the table below to adopt the new global minimum rate. For this reason, the G7 proposal must surmount some serious obstacles before it is adopted and changes the landscape of international tax rules.