The Evolution of Chinese Auto Exports

In 2010, China surpassed the EU-27 as the world’s largest producer of motor vehicles. Although Chinese auto exports also expanded during this period, China captured less than 1 percent of total global auto exports in 2014 (compared to an 8 percent share for the United States and a 13 percent share for Japan). Though the share of exports is still small relative to some of the more established auto producing countries, in growing their exports, Chinese automakers have focused on expanding into other emerging markets rather than competing in advanced country markets. This chart shows Chinese motor vehicle exports (SITC code 7321) broken down by destination region, starting in 2000. Europe and Central Asia was initially the largest market for Chinese exports. Since 2009, the level of exports to Europe has remained fairly constant, while other emerging market regions, particularly Latin America, Sub-Saharan Africa, and the Middle East and North Africa have seen exports expand. This expansion into emerging markets puts Chinese automakers in a good position going forward, as demand for vehicles is expected to shift away from the US and EU markets over the next 15 years. 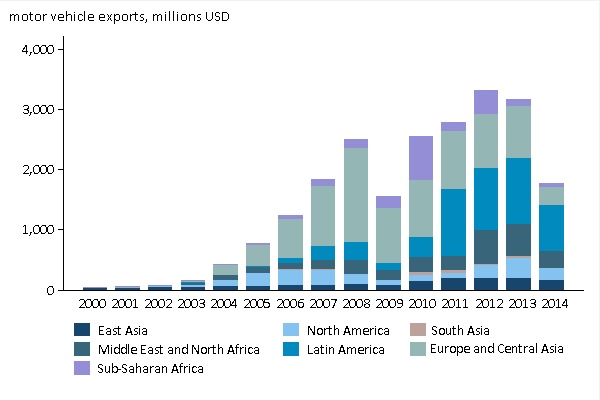 European versus American Perspectives on the Belt and Road Initiative