How Global Is the Chinese Auto Sector?

In 2014, the top selling vehicle globally was unsurprisingly, Japan's well known Toyota Corolla.  More surprising was the seventh top selling car, China’s Wuling Hongguang, manufactured by the joint venture of Chinese state-owned automaker SAIC and General Motors.  Although Chinese automakers captured less than 1 percent of global automobile trade in 2014, conditions are ripe for the Chinese auto sector to grow in both domestic and global markets.  In 2014, total sales of new vehicles in China were more than double US sales.[1]  The International Council on Clean Transportation estimates that between 2010 and 2030, China’s vehicle stock will grow by 221 percent.  In addition, the vehicle stock in other emerging markets, including India, the rest of East Asia, Latin America, and the Middle East, is expected to grow faster than in either the United States or EU-27 country members over the next 15 years. 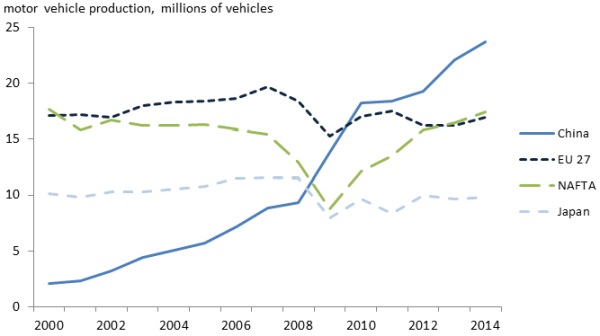 This surge in production suggests that Chinese automakers are benefitting from the growth in domestic demand for automobiles. However, it is less evident that these production numbers translate into increased market share for Chinese auto firms globally.  In 2014, less than 1 percent of global auto exports came from China, compared to 13 percent from Japan, 20 percent from NAFTA countries, and 55 percent from EU-27 countries.[2]  Additionally, the jump in Chinese production from 2008 to 2010 (figure 1) is not reflected in Chinese auto exports (figure 2).  This suggests that while Chinese automakers are producing more cars over time, they are not necessarily capturing an increasing share of the global market.

Two factors help explain this disconnect between production and exports.  First, the Chinese market is sufficiently large that many firms can rely on the domestic market for sales.  For example, since 2009 between 85 and 90 percent of the revenue for the private Chinese firm Great Wall Motors has come from sales in mainland China.[3]  Second, the Chinese domestic market does not follow the auto safety and environmental regulations of the UN Economic Commission for Europe (UNECE) or the United States, and domestic regulations are less stringent than either the US or EU rules.  While in the short term, this makes production less expensive for Chinese automakers, if they want to export to the European Union, Japan, or Korea, they will need to create vehicles that adhere to UNECE regulations, and for the US market, they will need to follow to a completely different set of regulations and approval mechanisms.   To take advantage of economies of scale in production for both the domestic and international market, Chinese automakers will need to adopt either the US or EU mandated standards.  Not adopting either standard within China means Chinese producers hoping to sell abroad could be forced to create three versions of the same car.

The future relative demand for cars worldwide is predicted to shift away from the United States and the European Union towards emerging markets. In fact, the distribution of Chinese motor vehicle exports shows that Chinese producers are already targeting emerging-market consumers. Figure 2 shows the trade value of Chinese motor vehicle exports (SITC code 7321) from 2000 to 2014 broken down by destination region. Initially, the largest market for Chinese exports is Europe and Central Asia, while later years see a surge in exports to Latin America, Sub-Saharan Africa, and the Middle East and North Africa. 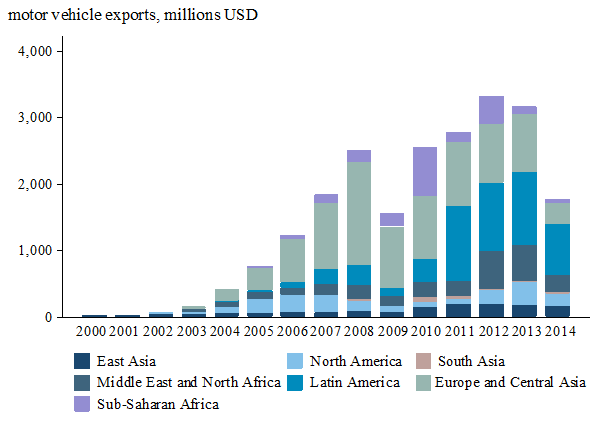 Overall, the Chinese auto sector seems ready to facilitate further growth of the auto sector within its own economy, as well as take advantage of predicted growth in other emerging-market countries.  However, there are still challenges ahead for the Chinese auto sector.  On the domestic side, the most recent sales data for 2015 show lower than expected demand for cars in the Chinese market.  Additionally, in recent years, increasingly more emerging-market countries (Kazakhstan and Egypt most recently) have signed on to the UNECE set of safety regulations.  As such, going forward, if Chinese automakers want to expand exports to other emerging markets, it is in China’s best interest to align its own regulations with those of the UNECE. Harmonizing regulations will increase efficiency within the sector in the short run, as models produced for China could also be sold without modification in Europe, Japan, and South Korea, and in the long run help encourage other large emerging auto markets, such as India, to also sign on to global standards.

European versus American Perspectives on the Belt and Road Initiative