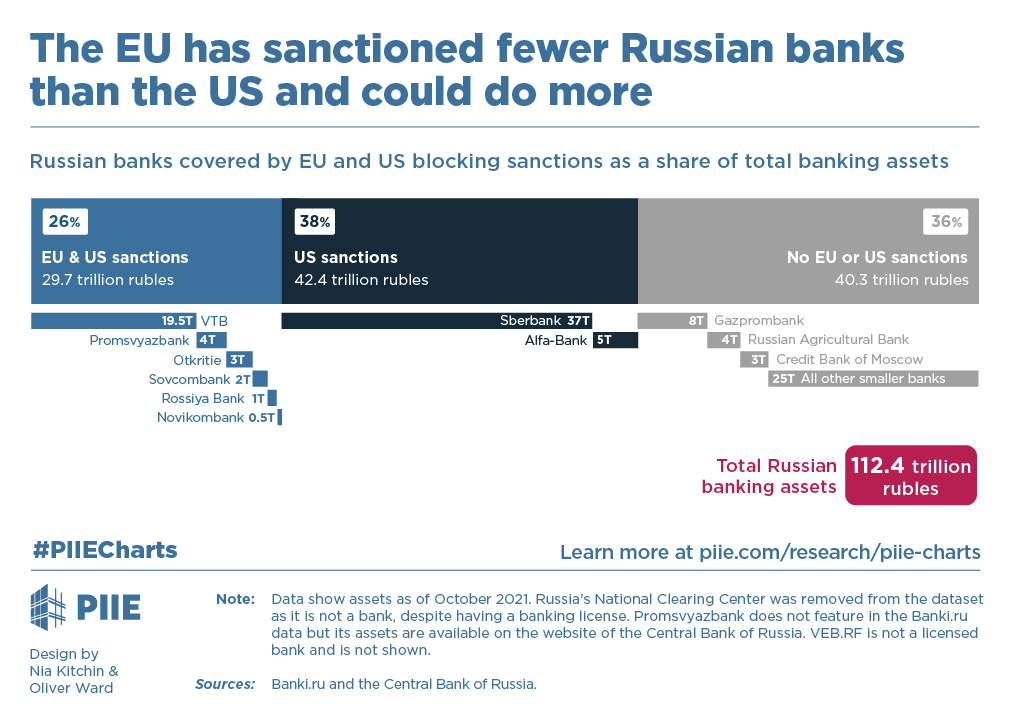 The European Union (EU) responded vigorously to Russian President Vladimir Putin's invasion of Ukraine, taking steps to disrupt the Russian economy and financial system. But Europe has yet to join the United States in sanctioning Sberbank—Russia's largest bank—and it should go even further and expand sanctions to cover several other large institutions.

EU blocking sanctions, which prohibit transactions between the sanctioned banks and entities subject to EU jurisdiction, have been applied to 6 Russian banks and one major nonbank financial institution (VEB.RF), covering just 26 percent of Russia's total banking assets. US blocking sanctions currently cover a much larger share at 64 percent of assets.

It may have been reasonable for the EU to initially adopt a cautious approach to protect its own financial stability. The EU no longer has any reason to hold back, however. The European Central Bank has indicated there is no cause for alarm from European banks' exposure to Russia. The EU could impose blocking sanctions on Sberbank and others while still keeping a financial channel open for the continued purchase of Russian hydrocarbons.

Banning such oil and gas purchases is the most important item on the EU's to-do list. In the meantime, sanctioning Sberbank and the other large Russian banks currently left untouched by EU sanctions would put additional pressure on the Russian economy and also make it more difficult for Russian entities to circumvent some of the other sanctions already in place. Given the ongoing Russian atrocities in Ukraine, there is much more risk in doing too little than in doing too much.

This PIIE Chart is based on Joshua Kirschenbaum and Nicolas Véron's blog post, The EU should sanction Sberbank and other Russian banks as it ponders banning Russian oil and gas.

Produced and designed by Nia Kitchin and Oliver Ward.