China bears point to weak trade performance as an indicator that China’s economy is much weaker than advertised, and that a substantial devaluation of the renminbi to boost growth is likely.

But a careful reading of the data suggests this view is not well founded. Yes, China’s exports fell by 1.8 percent in value terms last year, but global trade on the same measure fell by almost 14 percent. China’s share of global exports rose sharply, continuing the long term trend shown in the figure. The rise in share undermines the view that the substantial appreciation of the renminbi in trade weighted terms since mid-2005 has eroded China’s global competitiveness. 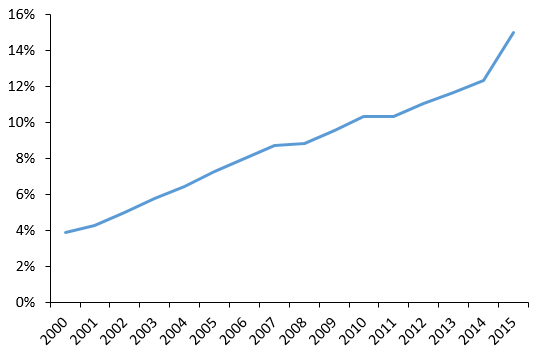 In value terms China’s imports fell by even more than its exports, by 13.2 percent. To the China bears this suggests weak domestic demand. But this is largely due to the falling global prices of primary products, which comprise a third of China’s imports. China’s imports of several of these commodities actually rose in volume terms last year—crude oil by 9 percent, iron ore by 2 percent, and copper ore by 13 percent. These data suggest China’s domestic growth is stronger than the super bears argue. Moreover, it shows that the common narrative saying China’s slowing growth is largely responsible for falling global commodity prices should be reexamined. The importance of increased global supply is widely recognized as the main cause of the falling price of crude oil. But, rising supply also looks to be a major contributor to the falling prices of iron ore, copper, and perhaps some other commodities.