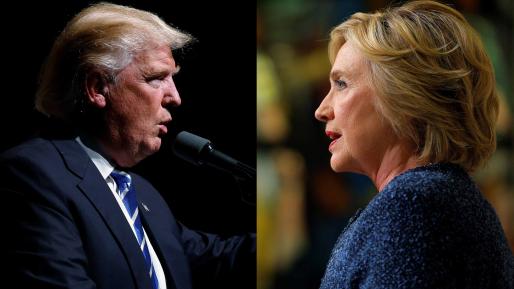 Assessing Trade Agendas in the US Presidential Campaign

Republican candidate Donald J. Trump’s sweeping proposals on international trade, if implemented, could unleash a trade war that would plunge the US economy into recession and cost more than 4 million private sector American jobs, according to an empirical analysis of the two candidates’ trade agendas by the Peterson Institute for International Economics. Trump has proclaimed that he would “rip up” existing trade agreements, renegotiate the North American Free Trade Agreement (NAFTA), and impose a 35 percent tariff on imports from Mexico and a 45 percent tariff on imports from China. Hillary Clinton, the Democratic candidate, has expressed skepticism about trade but in effect represents stasis. Both candidates have come out against the Trans-Pacific Partnership (TPP) between the United States and 11 Pacific Rim countries, which President Barack Obama signed earlier in 2016.

The authors of the empirical assessment, Marcus Noland, Tyler Moran, and Sherman Robinson, extend a macroeconomic model from Moody’s Analytics and find that if Trump raises tariffs sharply on China, Mexico, and other trading partners, export-dependent US industries that manufacture machinery used to create capital goods in the information technology, aerospace, and engineering sectors would be the most severely affected. But the shock resulting from Trump’s proposed trade sanctions would also damage sectors not engaged directly in trade, such as wholesale and retail distribution, restaurants, and temporary employment agencies, particularly in regions where the most heavily affected goods are produced. Millions of American jobs that appear unconnected to international trade—disproportionately lower-skilled and lower-wage jobs—would be at risk, according to the empirical study.

In a legal analysis, Gary Clyde Hufbauer argues that there is ample precedent and scope for a US president to unilaterally raise tariffs as Trump has vowed to do as a centerpiece of his trade policy. Any effort to block Trump’s actions through the courts, or amend the authorizing statutes in Congress, would be difficult and time-consuming.

In a separate chapter Noland analyzes the impact of trade policies advocated by both Trump and Clinton on the United States’ foreign policy interests. Pulling out of the TPP, as both candidates promise to do, would weaken US alliances in Asia and embolden its rivals, thus eroding US national security. Noland also warns that abrogation of NAFTA, as Trump threatens, would deliver a severe blow to Mexico’s economic and political development that could increase, not decrease, the flow of illegal migrants and drugs into the United States.

Data disclosure: Readers wishing to find out the study’s estimates of the economic impact on specific industrial sectors and on employment in a specific state or county may do so by going to this link. In keeping with its practice regarding research transparency, the Peterson Institute has posted the data and computation files for the study’s calculations on the Institute’s website at this link. This allows full replication and verification of the analysis.